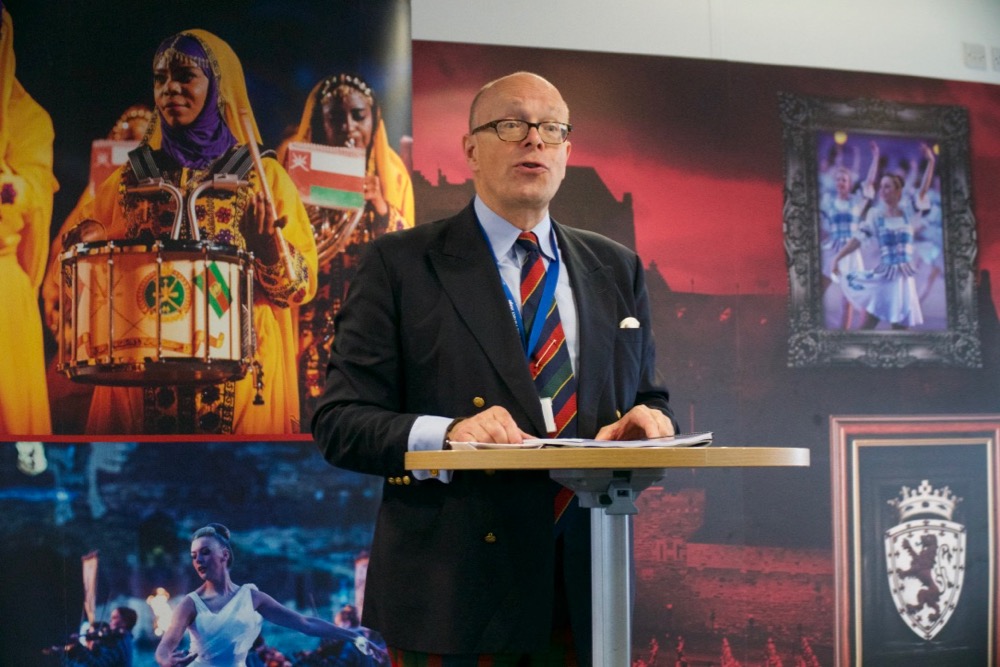 Today The Royal Edinburgh Military Tattoo announced that Brigadier David Allfrey will retire from his role as Chief Executive and Producer at the end of 2020, after ten years in the role.

Over the past decade Brigadier Allfrey has been an influential driving force, helping transform the Tattoo from a much-loved annual event in Edinburgh, to an ambitious international entertainment brand that celebrates military music, tradition and has the power to unite cultures across the globe.

Attracting annual audiences of 220,000 to Edinburgh Castle esplanade and global television viewing figures of 100 million, the Tattoo continues to grow.  Under his tenure it has expanded its global footprint to host shows in Australia and New Zealand and plans to deliver an overseas event annually including future shows in China and Canada by 2021.

At the same time, the Tattoo – a not-for-profit organisation – has significantly developed as a company, contributing over £70 million to the UK economy annually and sustaining charitable giving to the tune of £1 million each year.

Against this successful backdrop, Brigadier Allfrey, in agreement and with the full support of the Board of Trustees, judges it a good moment to step back and retire from the role. Going forward, the Board will make two distinct appointments of Chief Executive and Creative Director to continue the Tattoo’s growth and guide it through the next stage of its development towards its ambition to double turnover to £20 million by 2025.

“His achievements are vast; he has led the development of the Pipers Trail, Hjaltibonhoga, the Tattoo Band and the Tattoo Dance Company, has developed excellent and productive relationships around the world, secured a waiting list of countries wishing to perform in Edinburgh and internationally and has introduced new technologies in sound, lighting and event staging to make the show the awe-inspiring spectacle it is today. His creativity is legendary and his ability and diplomacy in turning stretching, difficult ideas into reality is admired by all.

“Over the next 15 months we will celebrate David’s enormous contribution to the Tattoo, Edinburgh and Scotland and enjoy the enduring legacy he will undoubtedly leave to his successors.”

Brigadier David Allfrey says: “I am hugely proud to have held this position for the last nine years and witness the Tattoo flourish at home and abroad.  I feel especially privileged to work with a fabulous team here in Edinburgh, great collaborators across Scotland, many world-renowned experts and an extraordinary array of talent from across the globe.  It has also been great fun to act as an ambassador for the Tattoo, the Armed Forces and our great nation.  I look forward very much to leading the Tattoo in our 70thAnniversary year and into the next stage of our international journey.  It is easy to describe my job as “The best in the world!”.

The Royal Edinburgh Military Tattoo’s mission is to deliver world-class, public military events, rooted in Scottish tradition that exceed the expectations of its audience and partners, and contribute to its charitable purposes and the prestige, prosperity and people of the nation, its friends and allies.