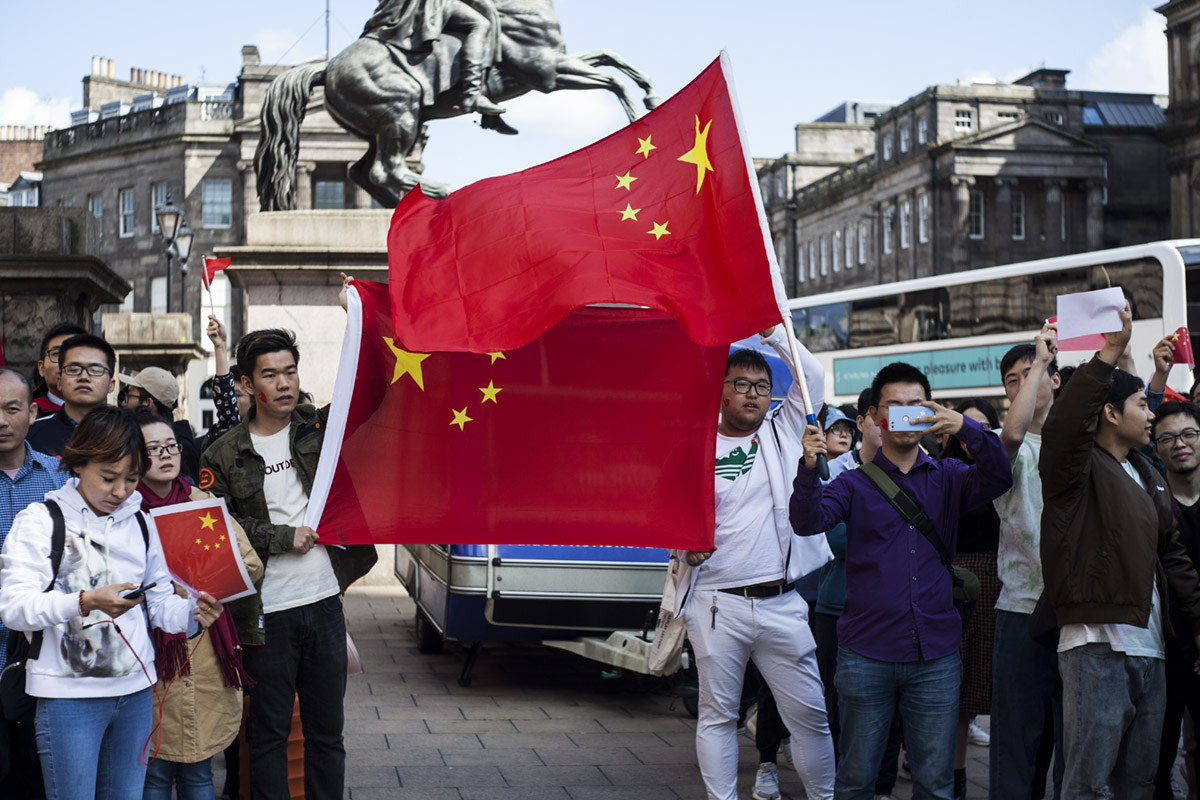 A peaceful demonstration for democracy in Hong Kong took place in Edinburgh today. A contingent of 20-30 protestors held a rally outside HM General Register House to express solidarity with demonstrators in Hong Kong. The protesters were met by a large crowd of pro-China demonstrators carrying Chinese flags and chanting “One Nation, One China”.

The protests began at 2.00pm and quickly grew from a small gathering of pro-Hong Kong supporters to include a large contingent of pro-China demonstrators. Pro-democracy protesters unveiled a large board bearing slogans including “No China expedition” and “Defend Hong Kong”.

Several pro-China demonstrators argue that the protests were an attempt by Hong Kong citizens to seek total independence from China. Hong Kong currently operates as a special administrative region under the “One country, two systems” principle agreed following the British handover in 1997. The protests originated in response to a now suspended extradition bill which would result in people arrested in Hong Kong being sent to mainland China for trial.

The protests, which began in April of this year now encompass broader demands including the resignation of Hong Kong’s leader Carrie Lam and an end to police brutality.

Ivan, a former student from Hong Kong living in Edinburgh said: “We are all from Hong Kong and we have seen the scenes of brutality used by the Hong Kong Police. We’ve been trying to organise rallies and get people to care about what is happening in Hong Kong.

“Raising awareness is vital and international pressure is important. We hope the UK Government will listen and support Hong Kong at this time. We are not asking for full independence, we just want our rights.”

When asked what they anticipate will happen in Hong Kong in the coming weeks, one pro-Hong Kong demonstrator, who gave his name as Chak, said: “At this stage, nobody can say what will happen. We are not advocating for independence. All we want is for the extradition law to be withdrawn and for the [Hong Kong] Police to be held accountable for the excessive force we’ve witnessed.”

One Pro-China demonstrator, who gave his name as Rhyme, said: “The problem with Hong Kong is they have democracy but want to be part of Britain again.”

A pro-China protester, who gave his name as Wang, said: “Most of the protesters take money to come out and protest. They see the Chinese Government as evil, but I know what China looks like.”

The Edinburgh rally follows several sister protests taking place in cities around the world. A pro-Hong Kong rally held in Melbourne on Saturday resulted in several clashes with Chinese nationalists and sparked a police warning that violence would not be tolerated.

The pro-democracy protest and counter-protest in Edinburgh ended around 5 o’clock with no arrests.