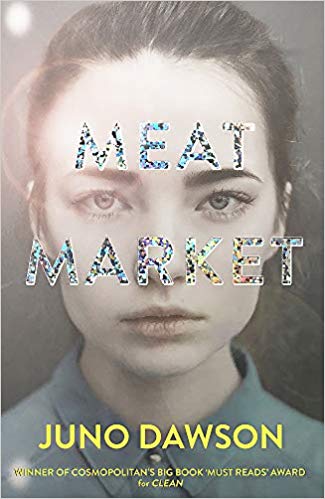 I think it’s safe to say that Amanda Block likes this book.

The Edinburgh-based literary consultant is talking about Juno Dawson’s latest novel Meat Market, the story of a working class girl who is scouted by a modelling agent while on a day out at Thorpe Park.

Every girl’s dream, perhaps – a quick route to fame and fortune for those with no qualifications but a face (and body) that fits. But as the world is beginning to realise, there’s a very dark side to the fashion industry, especially for young, vulnerable women, and this is what Dawson explores.

Speaking with Block at the Book Festival earlier this week, former primary teacher Dawson explained that the idea for the novel had been in her ‘idea drawer’ ever since one of her 11 year-old pupils was herself approached by a scout. The girl’s parents said no (‘don’t worry about her, she’s doing Medicine at Oxford’) but a seed was sown.

At the time Dawson didn’t even live in London, and her own writing for fashion magazines had yet to come, but she started to think about what life was really like for a teenage fashion model.

‘The idea was waiting for its moment.’

Dawson is a prolific writer – she’s produced YA and adult fiction, a Doctor Who spin-off (The Good Doctor), non-fiction and journalism (Glamour, Daze, The Guardian, Front Row, Newsnight), and compiled Proud, an anthology of LGBTQ+ writing for young adults of which she is indeed especially proud, and of which one reader said: ‘I wish I had had this book when I was younger. I am more grateful than I can say that I have it now.’

In 2018 Dawson’s novel Clean was published. It’s about a rich socialite teenager who becomes a drug addict and ends up in rehab. Readers loved it and it quickly became Dawson’s most successful book to date.

Before long her editor was asking ‘What next?’  She didn’t want to write a sequel – then she remembered the idea languishing in that drawer. The editor loved it.

Jana (‘rhymes with banana’) is a working class girl from the Winstanley Estate in Clapham, where Dawson herself lived at the time. Jana is similar to many of the ordinary, likable South London girls she knew and taught. The daughter of Serbian immigrants, Jana’s bullied at school for her height (5’11”) and gangly looks, looks she’s never before seen as an asset. Now a scout has told her she’s model material and she imagines being on the telly, Youtube, the catwalk ‘like one of those pedigree girls…having avocados on toast….not thinking about money because you have lots in your account’.

Although she has a feeling that something is a little bit wrong, Jana is swept into a world where hopeful girls are lured with promises of fame and fortune while being treated like commodities, herded into freezing cold warehouses, made to wait for hours without food, encouraged to starve themselves, to take pills to keep themselves going, and even – according to one of Dawson’s sources (her research for this book was some of the most extensive she had ever done) – sometimes kicked and bitten.

Jana is eventually sexually assaulted.  At this point in her writing, Dawson was so unhappy with her character’s fate (‘I felt like I was writing a sacrificial lamb, taking her to the altar’) that she considered dropping the book – then, on 5 October 2017, The New York Times ran a story about Harvey Weinstein.

In late 2016 allegations against TV stars and fashion photographers had already started to emerge. In May 2018 Weinstein was arrested. The #MeToo movement was getting louder:

Dawson admitted : ‘It was an incredible thing to live through; a seismic culture shift.’ She knew she had to finish Meat Market. It is ‘one more #MeToo’.

It’s also, Block notes, a wonderfully well written book with exceptional pacing and, unusually, no ‘flagging middle’. Dawson wanted to humanise her characters, but she doesn’t want readers to be sorry for Jana – this, she feels, would be manipulative. In the end, Jana becomes stronger and although there is horror, there is also empowerment and hope;

‘There is always hope. I don’t want to live in a world without hope. If you spend a day with trans youth groups, you know there is hope.’

Similarly, Dawson doesn’t want readers to come away thinking sex itself is a bad thing – the enemy – so she created Jana’s boyfriend Ferdy. Their relationship is ‘very boring’ because, she says, we can’t expect young people to know what a normal healthy relationship is like if we present them only with Hollywood romances or toxic disasters.

So how, given what we now know about the fashion industry (and, for that matter, so many other industries), can we still enjoy clothes and shopping? We have more information than our parents did about the sources of consumer goods;

‘These are guilty times to be living in.’

Dawson thought about ending the book with Jana in Bangladesh, making a documentary about factory workers’ conditions, but it was too ‘white saviour’, and was also another story. She still subscribes to Vogue, still loves her Gucci handbag, but is trying to reshape the way she shops (she quotes Vivienne Westwood : ‘Buy smarter’), relying more on charity and ethical suppliers. ‘There’s nothing wrong with dressing up’.

Young Adult literature is, she says, also for adults (she was thrilled when she saw people reading it on their daily commute), but it can often be far more subversive than ‘adult’ fiction. The essential thing about writing the YA voice is, she explains, not to try to write like a teenager sounds. Slang dates, and it’s also patronising to think that teenagers speak any differently from adults. Above all, don’t talk down – these readers may be young, but they are young adults, and frequently better read, and better informed, than their parents.

Dawson’s next book is not a sequel, but it will complete the trilogy started by Clean. It’s about mental health as she explained : ‘It’s my way, as are all my books, of dealing with something in me.’

And it’s also her way of telling young people to be brave, to be eager for change, and never, ever, to give up hope.