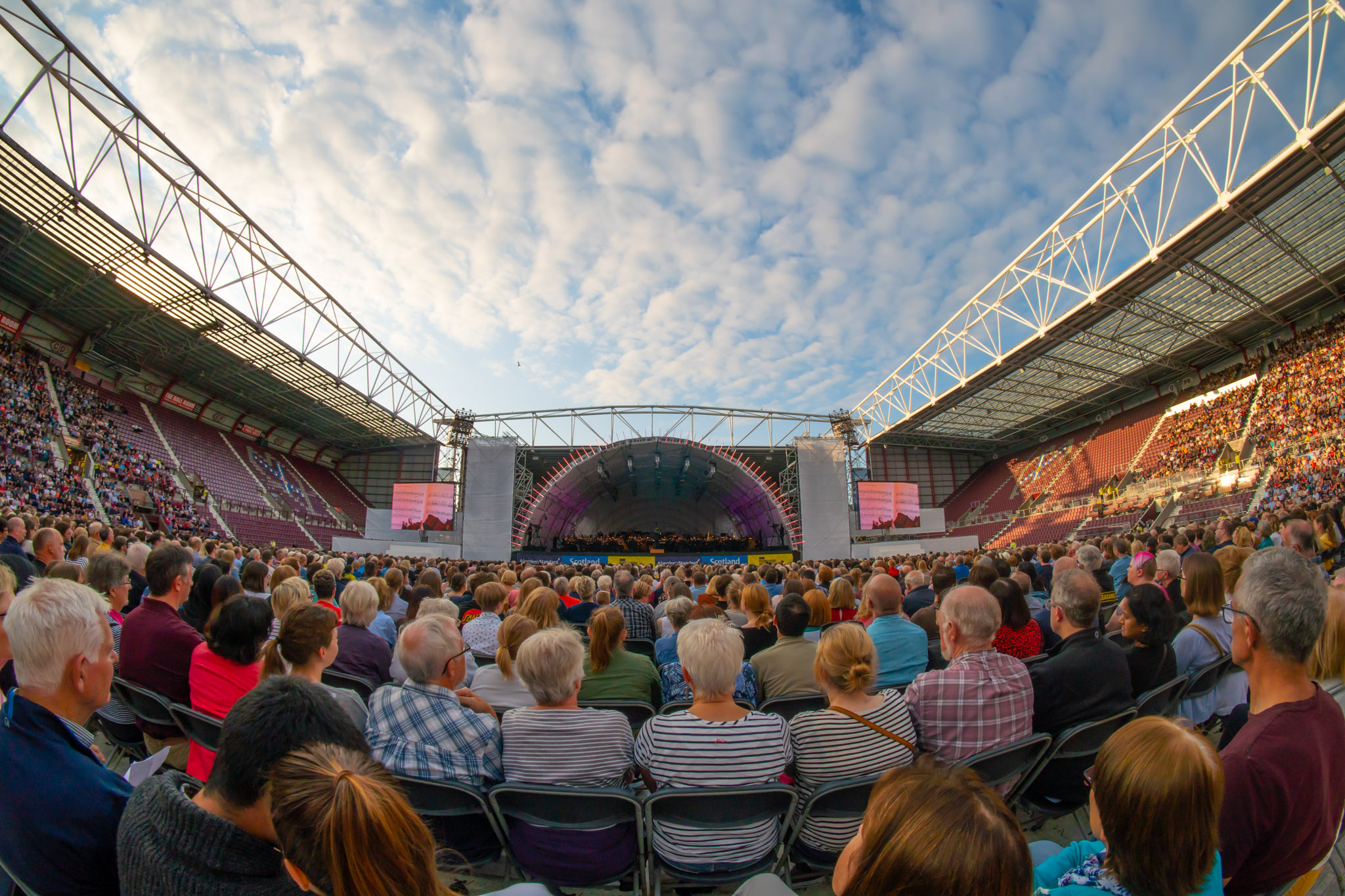 Playing music from films by John Williams and Mancini among others was a very popular choice, and the concert ended to a standing ovation from the audience. They particularly loved it when the Venezuelan conductor turned to address them and introduce the young apprentices they had brought along to play for a while.

The music included theme tunes from Jaws, Star Wars, Jurassic Park, Harry Potter and E.T. The odd Stormtrooper was keeping order and Darth Vader posed on the red carpet with anyone who wanted him to.

What a great idea to hold the concert there rather than in Murrayfield which would have been the next most obvious choice, and what a lovely way to start the Edinburgh International Festival with something so accessible. The idea was to bring classical music to those who might never have been to a concert before.

Fergus Linehan, Edinburgh International Festival Director said: “Tonight has been a very special occasion. Not only have we enjoyed a spectacular evening of world-class music from Gustavo Dudamel and the LA Phil, but we have brought many people to their first orchestral concert.  We very much hope that it has been a night they will never forget. It was terrific to see so many families and young people here from all over Edinburgh, many from Tynecastle itself. We couldn’t have done it without the support of Aberdeen Standard Investments and EventScotland, a big thank you to them for helping to make this possible.”

Actor Brian Cox had flown in from New York and was accompanying his friend Dmitry Melkin who is the Director of a physical theatre and dance show called Forest at Assembly Checkpoint.

Gustavo Dudamel, Music and Artistic Director of the LA Philharmonic said: “The Edinburgh International Festival, this great symbol of Scotland, has been such an important part of my musical life. I first visited this beautiful country with the Gothenburg Symphony Orchestra, and then with the Simón Bolívar Orchestra, and now it’s an honour and privilege to bring my beloved LA Phil to be a part of these three opening concerts, playing music from John Williams to John Adams to Mahler, and showcasing the amazing flexibility of this orchestra. I’m so proud to also be joined by some of the incredible young musicians of YOLA, and to lead them in rehearsal alongside the players of Big Noise Raploch. These two El Sistema-inspired music programs offer a profound example of our shared values, and a powerful vision of hope for the future of our humanity.”

The concert was fabulous. However it happened at an outdoor event the sound was crystal clear, with the only nuisance the seagulls who at one point were a bit put out, looking for their usual roosting spots.

What was a concern however at a free event such as this was that all the seats were not full. I can understand why the seats nearest the stage in each stand would not be occupied due to limited vision, but there were easily a couple of hundred seats on the pitch which were empty.

Who was not asked if they wanted a ticket?