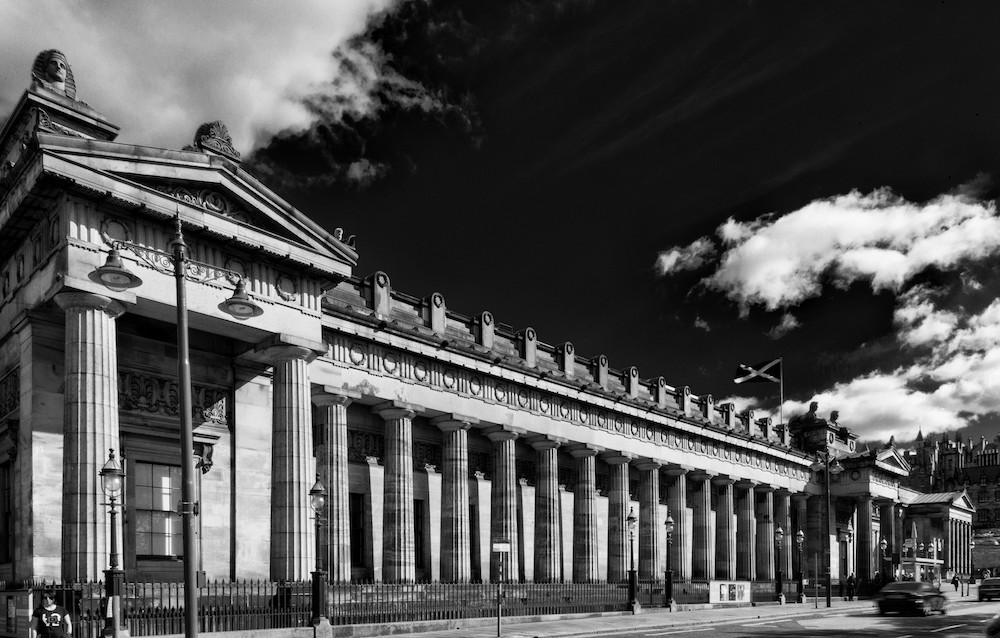 An accompanying photography competition will provide an exciting opportunity for budding photographers to exhibit alongside Smith and McLean in celebration of our UNESCO World Heritage city.

Classical Edinburgh explores and examines the changes that have taken place in half a century of development which has seen the neo-classical New Town transform from an area of refined respectability to an integral part of a bustling cosmopolitan city. Using Edwin Smith’s black and white images published in ‘The Making of Classical Edinburgh’ (1966) as a starting point, Colin McLean embarked on re-shooting and re-interpreting these seminal images.

The book, first published in 1966, quickly established its position as the authoritative work on the New Town, and helped stimulate a new interest in its Georgian architecture and the need for its conservation. The exhibition will have some 20 original prints by Edwin Smith, taken between the mid-1950s and the book’s publication in 1966, alongside 40 new images by Colin McLean, as well as one of Smith’s cameras and some of his technical notebooks, held in the Photography Collection of the Royal Institute of British Architects (RIBA) in London.

The exhibition is accompanied by an events programme, including talks by eminent architectural historians, adult classes, family events, a descriptive tour for the visually impaired, and a special ‘in conversation’ discussion on the history, conservation and future of Edinburgh’s New Town.

This will be a homage to Smith’s photography, a celebration of the city’s neo-classical architecture, and a reflection on the changes the New Town has seen over the last 50 years.

In September, Edinburgh University Press is launching a new version of ‘The Making of Classical Edinburgh’ with a new preface by Colin McLean and a selection of his new photographs.

A photography competition will be launched in conjunction with Classical Edinburgh and invites photographers to capture their own images of the New Town, with the winning entries displayed alongside the exhibition in the City Art Centre from 9 November 2019 to 8 March 2020.

There are four main geographical areas which the judges would like to see captured, encompassing key sites in the New Town. Photo entries will be accepted within the following categories:

1) After Dark: views of the city once the daylight has gone

2) Seasons: the heart of Edinburgh throughout the year

3) Working Life: the daily hustle and bustle of city life

Jessops will produce the chosen works and winners’ names will be credited on the Acknowledgements panel within the exhibition. Winners will be invited to the Private View of the exhibition on Thursday 14th November along with 4 guests and their work will be promoted across all of The City of Edinburgh Council media channels and on their website.

Councillor Donald Wilson, Edinburgh’s Convener of Culture and Communities said: “We’re exceptionally lucky in Edinburgh to have such outstanding architecture on our doorstep and it’s not difficult to see why generations of photographers have drawn on the beauty of the City for inspiration.

“This fascinating exhibition and accompanying events programme will shine a light on the Capital’s neo-classical architecture and the competition is a fantastic opportunity for budding photographers to share their views of Edinburgh and see their work displayed in our City Art Centre.”

Colin McLean said: “AJ Youngson’s book and, as importantly, Edwin Smith’s beautiful photographs, were significant catalysts in creating the environment in which Edinburgh’s New Town became the subject of one of Europe’s most significant architectural conservation programmes. It has been a joy to revisit Smith’s images with my own camera and capture the architectural legacy created by the skilled architects and tradesmen of the 18th and 19th centuries.”

Full competition guidelines including instructions for entrants can be found here.