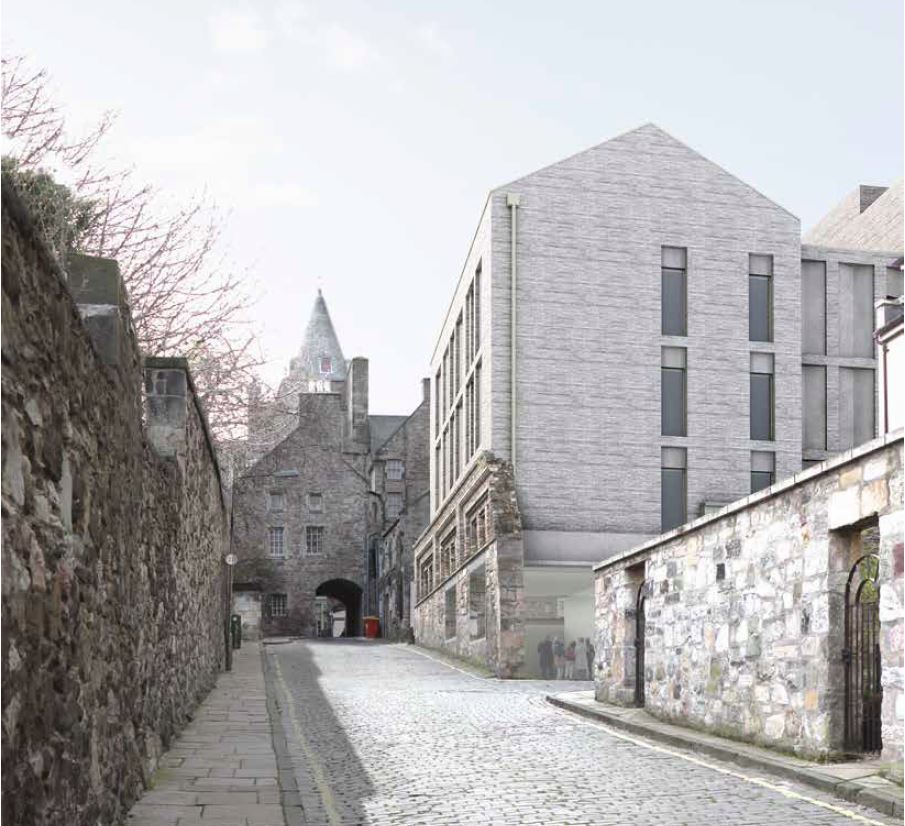 Planning officials are opposed to proposals to knock down a building on the Royal Mile and build a block of student flats.

Officers have recommended that city councillors on the development management sub-committee refuse planning permission to Summix Ltd for their Canongate scheme.

The plans show 91 student flats in a mix of clusters and studios in a six-storey block, together with a community space, student common areas, laundry facilities and 50 cycle parking spaces. There is provision for access but car parking is not provided on site.

The student accommodation is split into 86 studio apartments and five cluster flats. Although the developers have claimed the site is vacant, it is currently in use as the Old Tolbooth Market.

Officers said the plans “would not provide a sufficient mix of accommodation” and warned that “demolition of the existing structures will undermine the unique qualities of this historic environment”.
They added: “This is a poorly conceived design proposal which fails to respond to the prevailing urban character and historic grain of this part of the Old Town. It has not been demonstrated that the proposal would create or contribute towards a sense of place, with an overall design concept that draws upon the characteristics of the surrounding area.
“The proposal would represent a poor quality and inappropriate infill design, which would be damaging to the character and appearance of the Old Town Conservation Area and the outstanding universal value of the Edinburgh World Heritage Site.”
Historic Environment Scotland and Edinburgh World Heritage have both opposed the proposals – as has the Architectural Heritage Society of Scotland, Edinburgh East MP Tommy Sheppard, the Old Town Association, Old Town Community Council and city centre ward Cllr Karen Doran. The proposals have tallied up 26 objections and 21 letters of support.
Stuart Black from Summix, labelled the proposals “high-quality student accommodation” which he claimed would “regenerate this rather neglected part of the Old Town through careful re-development.”
He added: “Great attention has been taken to implement a design-led approach which delivers a final piece of the jigsaw in this World Heritage site and conservation area.
“The development also serves to address the increasing demand for student accommodation, fulfilling the ambitious growth plans of universities in the city, which are key drivers of the economy. It also serves to reduce pressure on the private housing market as well as delivering a substantial amount in additional expenditure into the local economy.”
if approved by councillors, the main access to the site will remain as it currently is, from Canongate through Bowling Green Close and the existing archway into the site.
The development would be built next to the New Waverley development, currently under construction – with the site sitting between Old Tolbooth Wynd and the Canongate Kirk. Developers claim the student flats will bring significant economic and social benefits to this part of the Old Town and High Street, estimated to generate more than 60 jobs.
Summix claims that increasing demand for student accommodation puts unwanted pressure on the private rented housing market, with full-time student numbers across Edinburgh projected to rise by 14 per cent by 2021/2022.  The firm has also estimated that the students from this development will generate around £840,000 in additional spending on items such as food, clothes and eating out – while they say that one job in the city is supported by the spending of every 11 students.
Councillors will determine the plans at a meeting on Wednesday 19 June 2019.