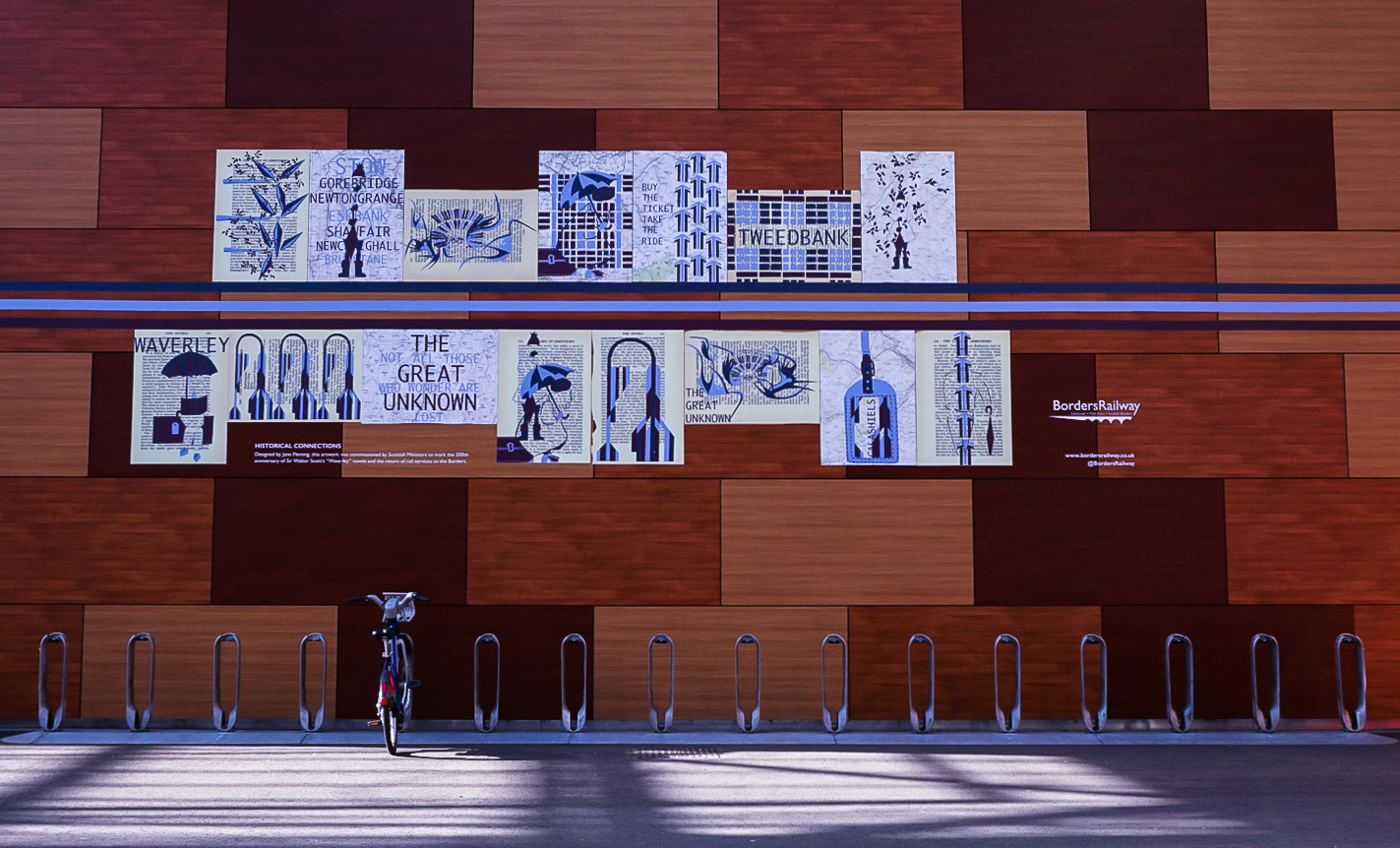 To keep us on track and to save me typing ‘Station Station’ throughout this post I’ll be using Waverley to mean Edinburgh Waverley Station, and Station to mean the Just Eat Hire Station at Edinburgh Waverley. Still with me? Great! Let’s get this bike train rolling.

Waverley is Edinburgh’s central train station. It has a large forecourt next to platform 2 and the steps leading to the Calton Road exit – FYI this exit dodges the crowds and car-favouring signals of Princes Street if you’re heading to Leith – that has on occasion hosted a market.

Most of the time it’s an empty expanse of smooth flooring that you must under no circumstances cycle on no matter how inviting a surface it looks. It’s here, in the ‘no bike games’ square, that you can find the Just Eat Cycles Station within Waverley.

On the wall above the Station is a mural that depicts pages of books and abstract images related to travel. On one of the pages, an incorrect quote from J.R.R. Tolkien’s poem All That Is Gold Does Not Glitter reads ‘Not all those who wonder are lost’. While it should read ‘wander’, it’s still a fitting group of words to display within a transport hub like Waverley, and as a writer who has been known to wander, it resonates deeply with me, too.

Waverley is big, and it’s busy.

In 2017/18 nearly 24 million people travelled through it. The main square where the shops and train schedule boards are situated is always teeming with people.

Commuters heading to work or school, football fans starting early in the bar, tourists travelling with heavy suitcases, someone running late for a train, charity groups raising awareness for good causes, Waverley staff doing all sorts of work. People just keep appearing all with the common goal of getting somewhere.

I like it here. There’s plenty of space to stand and take in everything that’s going on, and if you’re into people watching, Waverley ticks a lot of boxes.

The sound of Waverley is brilliant, too. As a result of the high glass ceiling, there is an echo to all of it as it reverberates around. It’s a symphony of voices, whistles, footsteps, wheelie suitcases, train engines, and grainy tannoy announcements. It’s the music of travel. When in a rush it can be overwhelming, but if you take the time to pause and listen, it’s quite lovely. It’s the urban equivalent to being deep in a forest, but the birdsong is that of people on the move.

You can read more about my active travel journey on my blog by clicking here.