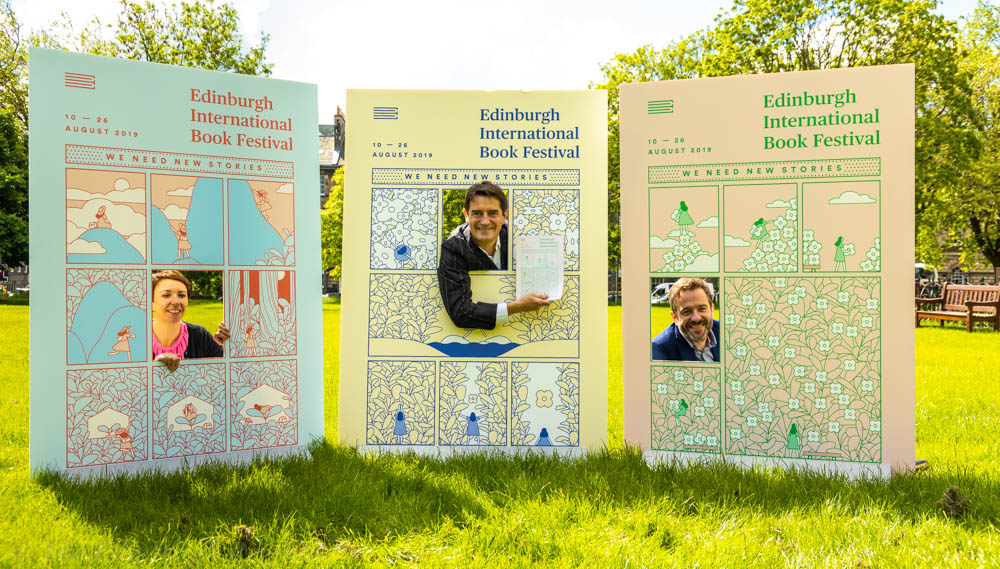 This year against an uncertain political backdrop and when the world is full of discussion online and off line, The Edinburgh International Book Festival is searching for new stories to give new meaning to what is happening in the world.

To do this they have invited writers from 63 countries to join them in the most international gathering of the Festival’s history. In Charlotte Square they will hold conversations, debates workshops and performances.

Nick Barley Director of The Edinburgh International Book Festival explained that he believes that book festivals are places for public discourse, and not simply a place for people to talk about their books. He regards the book festival as a place to discuss and share ideas so that the audience can participate too. He said : “We felt the context this year was exasperation from the public about the quality or the lack of quality of public discourse around major issues. We wanted to try and offer people the opportunity to talk in a different way at the Book Festival.

“We wondered about the kind of narratives being peddled by our politicians and public figures and whether we can interrogate them. For example last year when Kamal Ahmed came to the book festival he was talking about capitalism and the problems of capitalism.

“He told us that until recently as the central promise of capitalism we had been told to work hard, keep your head down and keep out of trouble. We had been told that if you do that then you can be assured that you will be better off than your parents were, and your children will be better off than you have been. It was the story that underlay the free world, but he asserted that it no longer works.

“The story is out of date, as are quite a few narratives that we have used to shape our world views. For example the myth of the narrative about scientific progress; the idea that every scientific discovery is a step forwards, a step towards something better. Then came the realisation that the discovery of plastic as a material we could use is not necessarily a step forward for the human race or the planet.

“That led us to realise there are lots of ways : technology, freedom of speech and in our political sphere where we need new narratives to help us identify and understand the world right now.

A Guardian journalist, Nesrine Malik, wrote a book called We Need New Stories. We felt that summed up all of the thinking that had gone into our programme. She will come to speak at this year’s festival.”

Barley offered us four novelists who matter to him this year and who are joining us in Edinburgh : One of the stars of this year’s festival will undoubtedly be Booker Prizewinner Arundhati Roy on her first visit to The Edinburgh International Book Festival who will speak with the First Minister Nicola Sturgeon. Barley recalled that the author was asked to come a decade ago but replied to say that stones were being thrown at her house and she could not leave India. She will speak about two books, one of which My Seditious Heart is a non-fiction memoir which she has been writing for two decades.

Tim Winton the Australian writer is also visiting Edinburgh for the first time and will appear in The New York Times Debate Series on 11 August in the event entitled From Carbon’s Casualties to Climate Solutions speaking about the Australian outback alongside Josh Haner the NYT photographer and Laura Watts who writes about energy innovation in Orkney.

Another Australian visiting Charlotte Square Garden for the first time is Thomas Keneally, author of Schindler’s Ark (which the film Schindler’s List was based upon), who appears at The New York Times Main Theatre on 25 August 2019 talking about his new work The Book of Science and Antiquities.

One of the first big names to drop when talking about this year’s festival is Salman Rushdie. Although Rushdie has visited before this time he is launching his new book Quichotte during the festival. His contemporary retelling of Don Quixote set in the US is both funny and heartbreaking.

There will be other book launches too including novels by Cressida Cowell, Tracy Chevalier, Ann Cleeves, Julia Donaldson and illustrator Axel Scheffler, James Meek and Deborah Levy.

Other writers to look out for include Prue Leith who has written her first recipe book for quarter of a century and who is appearing in Charlotte Square on the very first day of the festival. Composer James MacMillan is celebrating his sixtieth birthday this year with the publication of his memoir A Scots Song and he will share his recollections during an event in The New York Times Main Theatre at lunchtime on 21 August 2019. Edinburgh Central MSP Ruth Davidson will speak with Olympic athlete Dame Katherine Grainger about her latest book Yes She Can which is described as a treatise on inspirational women. She is making her Book Festival debut. Cathy Newman of Channel Four News is the main event on the first evening of the festival talking about the extraordinary stories of women she has discovered and which she has written about in her book Bloody Brilliant Women.

The former Irish President Mary Robinson will talk about climate change on 25 August 2019 in Our Children’s Planet in the New York Times Theatre. The environment is considered to be a strong theme this year and Robinson has written about the work people across the world are doing to overcome the threat in her book Climate Justice.

Venki Ramakrishnan is President of the Royal Society, author of Gene Machine and joint winner of the 2009 Nobel Prize in Chemistry for his study of the ribosome. He is appearing twice : first in The Appliance of Science at the Spark Theatre on 10 August 2019 talking about his first scientific breakthroughs and secondly in the Amnesty International Imprisoned Writers Series in the Baillie Gifford Corner Theatre when he will read on the theme of Words of Comfort.

Guest selectors include Deray McKesson who is a key figure in the Black Lives Matter movement. He was praised by President Obama after his work as a community organiser after Ferguson where Mike Brown was shot. He was an unknown schoolteacher until then but after the fatal shooting he spent over a year on the streets of Ferguson talking to people affected by it. He will be talking to writers Casey Gerald, Ibrahim X Kendi, Fatima Bhutto and Regina Porter and on 11 August he is in conversation with Jeanne Marie Laskas author of To Obama A People’s History. This is the story of the letters that Obama would write each day to ten of the 10,000 people who wrote to him each day. Laskas interviewed the letter writers, White House staff and the President. This became a story of the American people.

The second guest selector is Val McDermid who, in addition to her crime writing, is also a member of the band The Fun Loving Crime Writers who will be performing at the book festival. Nick Barley explained : “Her theme is Home/Less. She will look at the relationships that people have with home and the idea of home. She will speak with poet Joelle Taylor who spent many years living on the streets as well as Palestinian author Nayrouz Gamout and Ali Smith whose new book looks at being a refugee in the UK.

This is the programme the Book Festival has been running across Edinburgh for the last few months.

Janet Smyth, Children and Education Programme Director, explained : “We have worked in Muirhouse, Liberton and Wester Hailes to interrogate the word ‘citizen’. We have worked in secondary schools with author Claire Askew and community groups with Eleanor Thom drilling down into the idea. All of those conversations will come into the gardens in August for a day of drop in activities when anyone can participate in the debate that they have been having. There will also be a performance of their work.

“As well as the idea of how Edinburgh as a city deals with certain members of communities is really fascinating. There have been a lot of discussions around housing, health, food and food poverty.

“Another theme that has emerged is this concept of how we come together around crafting like knitting and sewing. People particularly in North Edinburgh use that as a way of sharing time together.”

In the children’s programme Malorie Blackman will appear at The New York Times main theatre on 11 August talking about the newest book in the groundbreaking Noughts and Crosses series, Crossfire. The books for ages 12+ deal with racism, politics and terrorism.

The author of How to Train Your Dragon, Cressida Cowell, will talk about Dragons and Wizards for an audience of 8-12 year olds in the New York Times Main Theatre on 25 August 2019.

Edinburgh’s own Julia Donaldson, author of Gruffalo, appears at two events the first on 10 August 2019 in The New York Times Main Theatre speaking with Catherine Rayner about picture books for an audience of 4 to 7 year-olds. This will be a performance of drawing, singing and dancing – an appropriate beginning for the 2019 festival as this is one of the first events. Then at the end of the festival on 24 August 2019 Donaldson appears again speaking with Axel Scheffler the other part of the Gruffalo team telling the tale of the Smeds and Smoos for an audience of 4-7 year olds.

Konnie Huq the former Blue Peter presenter will talk about Silly Science for families with children of 8 plus on 15 August 2019 in The New York Times Main Theatre. Huq has written her own story Cookie about a British-Bangladeshi girl who wants to be a scientist.

Stand up comedian and children’s author Harry Hill appears in the main theatre on the first day 10 August 2019 talking about his latest book Matt Millz Stands Up! Can Matt save himself from humiliation by writing some new jokes….?

Clare Balding has written the next book of her racehorse series The Racehorse Who Learned to Dance for children aged 8+ and you are invited to horse around with her in The New York Times Main Theatre on 19 August 2019.

Horrid Henry creator Francesca Simon is joined by composer Gavin Higgins and soprano Marta Fontanals-Simmons to discuss adapting her novel, The Monstrous Child, into an opera.

Nick Barley, Director of the Edinburgh International Book Festival, concluded: “Stories are devices that help humans make sense of a complex world. At a time of uncertainty, simple narratives such as ‘Make America Great Again’ or ‘Take Back Control,’ may be enticing to some, but do they tell us what’s truly achievable?

“The 2019 Book Festival looks at seismic changes in 21st century society, including the impact of technology; the collapse of trust in who’s telling the truth; and the increasing dominance of certain languages at the expense of others. These have long been the terrain of science fiction, but this Festival’s theme is not only focusing on fiction. Whether we’re listening to scientists and politicians or mythmakers and poets, to understand the world around us We Need New Stories.”