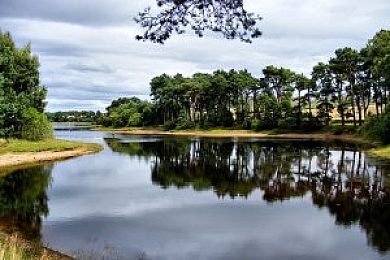 Hooked on Harlaw, a drop-in fishing taster, is back in June and this time it will feature an exhibition of antique fishing tackle.

Sean Williams, a regular angler at Harlaw and Threipmuir, will be exhibiting on Sunday, June 2 and will be based at Harlaw Visitor Centre in the Pentland Hills above Balerno.

And there are other attractions around the centre between 10am and 3pm.

Jim McComb will be cooking freshly-caught rainbow trout on an open-air BBQ. Samples are free.

Bob Armstrong will be showing visitors how to prepare trout for eating in a different way without cooking it.

For the record, gravlax is a Nordic dish of raw salmon, cured in salt, sugar, and dill. It is usually served as an appetizer.

Trout is ideal for this preparation and free samples will also be available.

Ronnie Robinson will be demonstrating the art of fly tying and G P Goh (correct) and Robert Ross, past chairman of Malleny Angling (MA), who organise the event, will be showing visitors how to cast a fly.

He said: “We were graced by beautiful weather last year and we naturally hope for the same again.

“The idea is to showcase fly fishing and demonstrate that men and women and children can take part in the sport.”

It also allows the non-profit-making club, who administer fishing at the two reservoirs, to publicise the waters.

Youngsters under-16 can fish free with a permit holding parent as the club bid to attract more young people into the sport.

Good Companions landed 22 fish and their favourites on the day were buzzers and lures.

Glencorse Reservoir owner Bill Taylor revealed some of his clients had up to 30 fish with the most productive lines being were D3 or Fast Glass lines with nymphs, mini lure and cormorants proving the best patterns.

Bowden Springs owner Jim Garagro said he is still dogged by a “pesky” east wind but catches have still been good.

Trout have tended to swim in the upper layers of his fly loch with floating lines working and buzzers and snail patterns producing with damsel patterns catching on warm days.

There have been some notable catches in the bait loch with Peter Grant from Bo’ness hooking three rainbows for over 8lbs, the best 3lb 15oz

Leeanne Aitchison of Drumtassie was packed with anglers in the fly and bait ponds over the holiday weekend.

William Clarkson from Forth bagged a hard-fighting 13lb 5oz rainbow fly fishing while Livingston-based Mark Sievewright landed a 12.5lbs trout on a Rapala lure in the bait pond and fish of 8.5lbs and several more of around 3lbs on Powerbait. 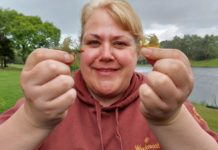