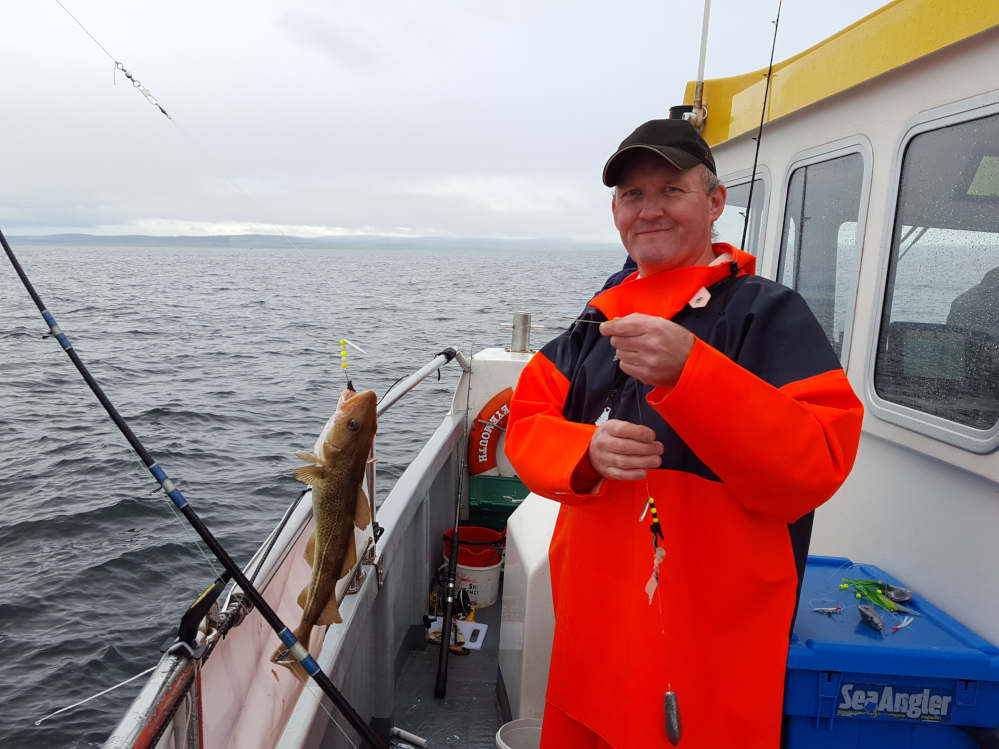 The alarm sounded at 4am on a Sunday morning and I drove from Edinburgh through the rain – it was bucketing – to a dreich, deserted quayside at Eyemouth.

Several other anglers were also soaked as we boarded Sagittarius nestling mid-harbour. Boss Derek Anderson introduced skipper-for-the-day Ronnie Marshall and we set sail two minutes before the scheduled start time of 7am.

The rain continued to pour as we tackled-up and we all looked for shelter as we headed for the fishing grounds.

The chat was about the weather and the affect it might have on fishing but, thankfully, the rain relented as we reached our first mark.

And even the remaining drops failed to dampen spirits we we hit fish. Cod and coley arrived minutes after the first casts.

To use a cliche, we were hooked. Fish after fish was placed in buckets on the deck and the mood lifted. We moved on to another mark after Ronnie had consulted his instruments.

Again, cod and coley arrived using a variety of bait and artificial lures. The fish were in prime condition and fought hard.

Struan Kyte of Haddington had dug his own bait on an East Lothian beach on Saturday ahead of the trip and he was rewarded as the cod kept on coming to his hooks.

Three hook rigs landed three fish at the same time several occasions during the six-hour trip which attracted anglers from as far afield as Plymouth.

Bryan Boardman had come north to Glasgow to help his father Daniel with some DIY but they took time out to go fishing and their bucket filled fast.

Andrew Dyer from Gorebridge, normally a fly fisherman but an occasional sea angler, was also in the thick of the action.

Skipper Ronnie was always around with advice on tactics and to assist with landing fish and the coffee on tap in the captain’s area was welcome.

The wind began to pick up making drifting difficult but the fish kept on coming. The swell increased and the sun eventually appeared as we made our way back to harbour, our bags full with East Coast fish.

The trip was run by Aquamarine Charters and the boat, which has bags of room, and a toilet, was ideal for the purpose.

We arrived back in port at 1pm with another charter booked for the sailing minutes later. Ronnie’s turnaround was quicker than that of a budget airline but everybody had smiles on their faces and the soaking we all received on leaving port was a distance memory.