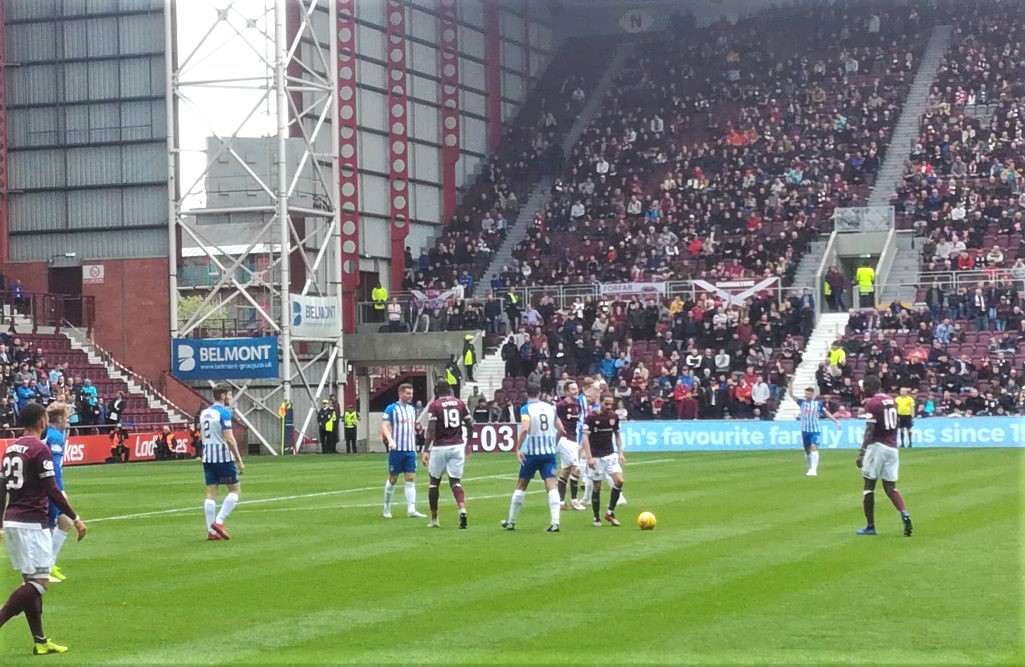 Hearts supporters heaved a huge sigh of relief as they departed Tynecastle for the last time this season at tea-time on Saturday. Not because their team had scraped a win – they didn’t – but more because they don’t have to endure another disappointing performance from their team in Gorgie this season.

A goal four minutes from time meant Kilmarnock left the capital with all three points ensuring there was as much appetite among the home support to stay behind after the final whistle to see their team take a ‘lap of honour’ as there is for another extension to the Brexit saga. Those who did remain numbered little more than three men and a dog…

Of equal concern to the Maroon Army was the sight of striker Uche Ikpeazu limping off at the start of the second half with what looked like a hamstring injury – meaning the big man must be a doubt for the Scottish Cup final three weeks today.

Hearts manager Craig Levein made a couple of changes to the team that drew the Edinburgh derby at Easter Road last Sunday. Connor Smith and Sean Clare made way for Steven MacLean and the forgotten man of Tynecastle Ryan Edwards.

The game began in lively fashion with Brophy forcing a fine save from Hearts keeper Bobby Zlamal early on. Then Arnaud Djoum had a chance for the home team, but he fired his attempt on goal high into the visiting support in the Roseburn Stand.

Killie should have opened the scoring in the 20th minute when O’Donnell crossed for Millar who seemed certain to score only to be denied by a superb tackle from John Souttar.

Uche Ikpeazu should have given Hearts the lead when he pounced on uncertainty from Bruce but while the big striker took the ball round keeper Bachmann, the Killie defender – son of former Manchester United defender Steve Bruce – recovered to block Ikpeazu’s shot on goal.

Harry Cochrane had a couple of decent efforts for the home side, but the impression was that it was Killie who looked the likelier to score, particularly when O’Donnell came close again with an effort which was just over.

There was a blow for Hearts just a couple of minutes into the second half when Uche Ikpeazu pulled up clutching his thigh. It was obvious he was feeling his hamstring and he hobbled off to be replaced by Sean Clare.

Midway through the second half Jake Mulraney crossed for Steven MacLean but his attempt on goal was cleared. Moments later, Killie’s Bruce headed over from close range as it seemed neither team was intent on scoring.

Hearts substitute Olly Lee then delivered a free-kick to the head of Christophe Berra but the captain couldn’t direct his header past Bachmann.

Just as the game appeared to be heading for a goalless draw the inevitable happened. The impressive Mulumbu fed Dicker whose pass found Findlay who buried his shot beyond the despairing arms of Bobby Zlamal to win the game for Killie.

This was the cue for a mass exodus of Hearts fans who, once again, voiced their displeasure towards manager Craig Levein.

The Hearts boss was in philosophical mood after the game, unlike his team’s supporters who were clearly angry after yet another home defeat.

Levein told the official Hearts website he took Ikpeazu off as a precaution and is hopeful the striker will be fit for the cup final.

“Uche’s hamstring was tight at half-time – he went back out to try it, but he felt it tighten up again, so we told him if he felt it to just come off.  I’m quite confident we don’t have any serious damage there. He didn’t feel anything go.”

“If he recovers in ten days I’ll consider him for the Celtic game (the final league game of the season at Celtic Park on 19th May) , but he shouldn’t be a concern for the Cup final. I don’t want to take any risks as I’ve already got Peter Haring who needs a game before the final, if he’s even fit to make it.”

About the match itself Levein added:

“I could have written the script. I thought there was nothing in the match at all.”

“I can’t complain about the effort our players put in. We had spells where we played decent stuff, and they counter well and do well from set pieces, and we’ve succumbed to a set-piece which we didn’t clear.

“I don’t know if that little bit extra they’ve got to play for had an impact or not, but I said to the players afterwards that I couldn’t say they were better than us or vice-versa, it came down to one goal and they got it.”

Top man: Ryan Edwards – making his home debut, he must have covered every blade of the impressive Tynecastle pitch.