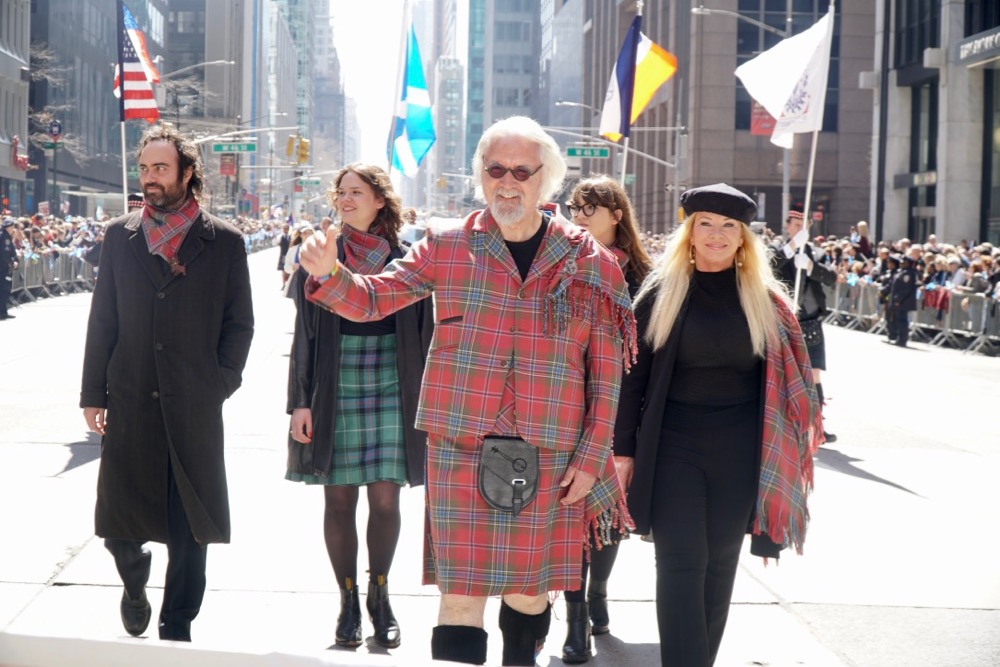 Howie Nicholsby owns 21st Century Kilts in Edinburgh’s Thistle Street. This year he had a very special commission – to make an outfit for Sir Billy Connolly to wear as Grand Marshal of the New York City Tartan Day Parade.

This is an event which Howie knows all about. The screensaver on his computer, visible to all who come into his shop, shows him, his wife Charlie and their two young boys leading the parade down Sixth Avenue in 2014.

Connolly’s kilt outfit with matching tartan waistcoat and jacket stunned the crowd lining Sixth Avenue on Saturday. He was dressed top to tail in Weathered Maclean of Duart, his family tartan. There was an air of traditionality with a shoulder plaid which Howie’s mum and dad made.

Howie’s own kilts are very distinctive with pockets rather than a sporran, often with pockets lined in the same fabric as the inside of the matching jacket. The attention to detail is intense, but as a shoulder plaid is not really his style he was happy to hand that part of the outfit over to his parents. Howie claims it is always possible to have any styles mixed together.

“To have Billy Connolly as Grand Marshal this year is an absolute dream.”

Even Diana Gabaldon author of the Outlander books explained that her books began with a character wearing a kilt based on someone she saw in a Dr Who episode. When she accepted a special award from VisitScotland in Edinburgh recently, she commented that it was a very ‘fetching’ look, even though she had not visited Scotland then.

Howie recommends to all his customers that they wear a smart boot with their kilts. It is then up to the individual on the day whether they wish to wear socks up or down, have garter flashes or a sporran and not his front detachable pocket system.

It was all Billy’s choice on the day and Howie was there to guide and help him.

He did not have to meet Sir Billy face to face to measure him up for his outfit, which he said is simply the result of years of experience. Although they have met in the past, the first time Howie got together with him this year was to deliver and fit the outfit in his New York hotel room ahead of the parade.

He explained : “Billy’s wife Pamela supplied some sizes and I made a wee guess here and there so thankfully it looks as though it has worked out.  Since I had met him though, I had a memory of his posture – and a fine figure of a man he is!

“It is a total honour. I have dressed many people over the years, from plumbers to princes like Prince Albert of Monaco, for example. When it comes to someone you truly love, there is no suspension of disbelief. He is a real person and that is what you see. Sometimes if you meet your heroes it can be a bit disconcerting or you watch them in a film and you lose something. But with Billy Connolly he is just a pleasure to be around. I first met him at Brian Cox’s wedding up in the Highlands when he entertained us with a hysterical story.

“We were walking from a walled garden to the beach between ceremonies. I put Pamela’s high heels in my now 12 year-old son’s buggy. Noah was 10 days old at the time. We just got chatting and when Billy caught up with us he was wearing the same tartan he wore today. It is a beautiful tartan and it is his mother’s tartan. This is what you’re meant to do – follow your mother’s maiden name. That is your clan.

“His mother is Mary McLean of the McLeans of Duart from Mull. So this is the correct tartan for him to wear.

“When I first met him he was wearing a kilt along with a jabot (all the frilly bits!). This year he was a little different with a matching tartan jacket and waistcoat, and I was there to make sure his experience was as positive as possible. I was there for him.”

There’s eight yards of tartan in any of Howie’s kilts, unless he is making it from leather when it requires only 6 metres of the fabric. He showed me a photo of a classroom of 19 schoolchildren including his son Noah holding 8 yards of fabric which stretches across the whole room.

Howie accessorises kilts for each person individually. He has a numerology bent which results in certain numbers of buttons, colours of certain buttonholes being created in each outfit. But that is the part which is top secret and he would not be drawn on the numbers appropriate to this particular Knight of the Realm.

He explained that all his kilts come with chunky socks, the kilt pin which he designed himself and garter flashes for wearing formally, but he gives his customers a free hand in how they wear their bespoke outfits. There are a lot of trimmings including the lining of the jacket. Pamela and Billy chose the ‘Smoking Skulls’ lining. It is very cool and funky. I sent them links to websites which showed the linings and I think this one is very appropriate. If we had a king you would want him to be a bit of fun wouldn’t you?

There was one part of the outfit where Howie made his own decision though – he made it a bit longer than the length supplied. He said that too comes from experience : “I’ve been doing this for 34 years, and have been selling socks and garter flashes since I was six.I knew that the length had to be a bit longer.”

Their two sons, Noah and Otto, accompanied Howie and Charlie to New York.  It was a bit of a family get together in the earlier part of the week, as Howie’s sister Emma flew in from the Caribbean and then he met up with the Connollys on Friday night to put the finishing touches.

But even Howie admits that all of the credit goes to Charlie Nicholsby whose idea it was to ask Billy to accept the role and whose hard work ensured that it happened for the 21st year.

There have been great years in New York but this was a very special one indeed. Question is how do you top that?