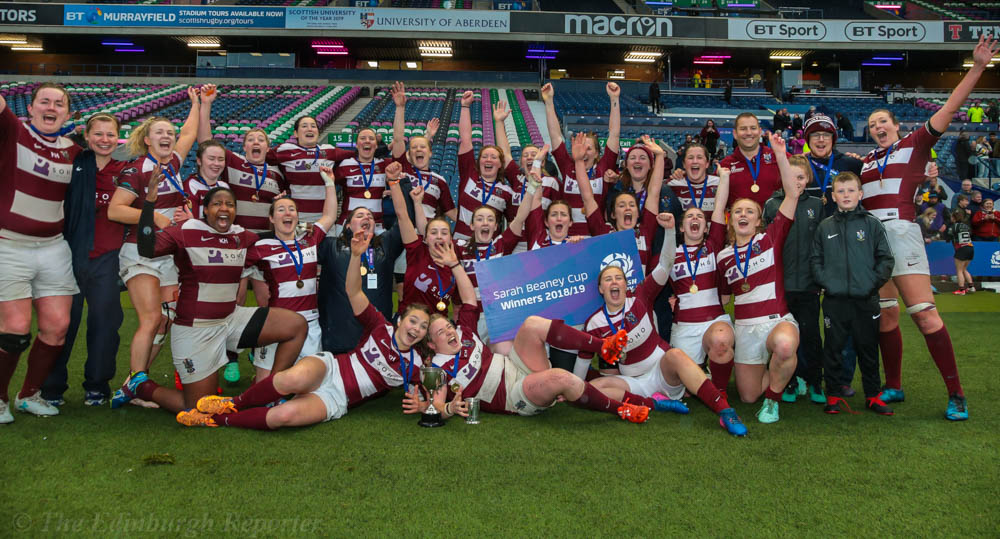 The final Final on Silver Saturday was the Sarah Beaney Cup was another West v East clash featuring Glasgow’s Hillhead-Jordanhill and Edinburgh’s Watsonians. Hillhead are getting on for being perennial finalists, but Watsonians were gaining ground – and International-qualified players – on their cross-country rivals.

The match was also a repeat of the 2018 Final where Hillhead had put 68 points on the, still emerging, Watsonians. Revenge, however, is a dish best served cold…

And cold it was as the match kicked off in fairly persistent rain, which would do nothing to aid the handling of an increasingly slippery ball throughout the whole of the match.

Hillhead’s handling was fine early on, however, as they scored the first points after around four minutes. Moving Watsonians back into their 22, the Glasgow side put Scotland International, Hannah Smith, through a gap and the centre slid in for the opener. Scrum half, Mairi Mcdonald then added the extras for a 7-0 lead.

Watsonians then returned the pressure from the restart as they pushed Hillhead deep, forcing them to kick. The Edinburgh side then returned with feeling, smashing the ball through the defence, with centre, Megan Gaffney, proving hard to get hands on, and quickly gaining territory.

Their hard work soon paid off as, with 10 minutes on the clock, Watsonians were on the score board with a try of their own. Swiftly moving the ball through the hands, they forced their way deep into Hillhead’s 22, Alice King finishing off the move, crashing through for the opening Watsonians’ try. Captain, Nicola Nightingale, then added the extras for 7-7.

Just over five minutes later, they had their second. Bringing the ball back from another clearing kick, prop, Ailie Tucker, got on the end of a pass on the edge of the 22 and swept all opposition aside as she charged for the line, sliding home near the posts for the lead. Nightingale again converted for 7-14 with 19 minutes played.

With the rain continuing to cause a few issues, Hillhead returned to the fray and managed to win a kickable penalty, which McDonald saw over for 10-14 with just over 15 minutes of the half left.

The remainder of the half was fairly even, with turn-overs at the breakdown gaining ‘popularity’, but neither team were able to add to their tally and the half closed with the score still at 10-14 to Watsonians.

The first 10 minutes of the second half were, again, fairly evenly matched, with neither side able to gain a significant upper hand. However, as the hour mark ticked over, Watsonians had worked their way into a strong position in Hillhead’s half of the pitch.

Using the speed she is famed for in the Scottish camp, hooker, Lana Skeldon, made an outside break, carrying for several metres. As the defence came across, she passed inside to Gaffney who made more metres before she was dragged down agonisingly close to the line.

However, the centre had the presence of mind to pop the ball up into the hands of the following Emma Evans, and the full back then had the, seemingly, simple task of sliding over from two metres out to score under the posts.

With Nightingale off the pitch being treated for an injury, the kicking duties fell to Skeldon and, as has drawn comment in wider circles, she successfully slotted the kick home for 10-21 after 63 minutes.

Hillhead then came back into the match with a vengeance and they then spent the subsequent 10 minutes encamped in Watsonians’ half, much of it dangerously close to the line.

Then came, what could have turned out to be, disaster for Watsonians! As the ball was moved around, Hillhead’s Abi Evans made a break for the line only to be dragged back by Gaffney, hitting the post in the process. The referee immediately called a halt to play to ‘go upstairs’ to check for foul play.

A long look deemed foul play had, in fact, taken place and Gaffney was carded for a high tackle. To compound her misery with her first ever yellow, the referee awarded a penalty try for ‘foul play preventing a scoring opportunity’ and, as the Watsonians’ centre trotted to the sidelines, handed the Glasgow side seven points for 17-21 and a lifeline.

With eight minutes still to play, it looked like a hard task for the 14-woman, Watsonians to hold on to the lead, but they rolled their sleeves up and did that very thing, seeing out the remainder of time and taking the Sarah Beaney Cup for the first time in their history.