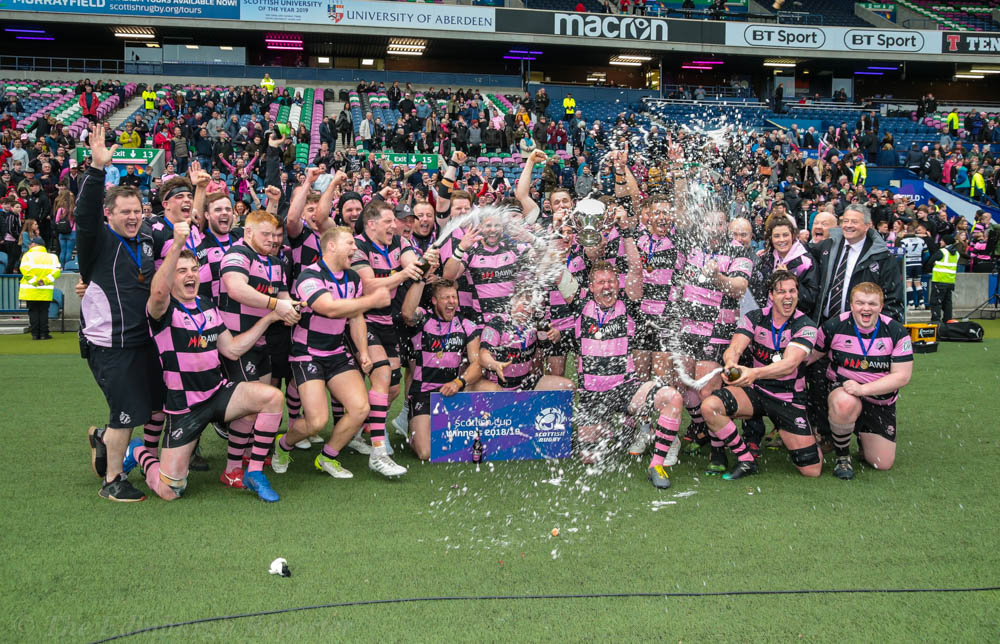 In a Silver Saturday Final’s Day at BT Murrayfield which saw several dramatic matches – including 39 points from Berwick as they romped away from Greenock, overcoming a 17 point deficit to take the match to extra time – the Scottish Cup was won at the death by the ‘home’ side, Ayr, as they also came back to beat Heriots in the Cup Final.

An early, unconverted, try from Ayr’s Kyle Rowe had the crowd sitting up in anticipation of an exciting match, and, to keep the going, within a few minutes Heriots had pulled back to 5-3 through the boot of Ross Jones.

As the rain started to fall a few handling errors crept in, but the next try came from sustained pressure by Ayr on the Heriots defence. Driving from deep, Ayr then won a series of scrum penalties around Heriot’s five-metre line before sending the ball wide and putting hooker, Robbie Smith over from close range. Frazier Climo then converted for 12-3.

Heriots then came right back into the game with a well worked try off the back of an Ayr knock-on. Wing, Jack Blain came off his line and drew in the defence, leaving space down the outside. His pass found Charlie Simpson on the right and the full back galloped over for the, converted, try and 12-10.

The final 10 minutes saw Heriots increasing the pressure on Ayr and their second try came from a restart following a missed penalty. Bringing the ball straight back back, they worked to make a gap out wide and the move was finished off in the corner by lock, Struan Dewar on the 40 minute mark for 12-15 at half time.

An early penalty after the break from Ross Jones extended Heriots’ lead to 12-18, before they extended again with the try of the match. The greasy ball gave Ayr a few problems with handling and the Edinburgh side were then able to use this to move the game away from their territory.

Pressure on the defence saw the ball swung wide through the back division, culminating in a sleight-of-hand pass behind his back from Simpson to Blain on the wing. The Heriots’ 14 then had ‘nothing to do’ but battle through several tackles to go over in the left corner. Jones then converted the 54th minute try for 12-25.

As the match approached the final 10 minutes, Heriots were looking good for the win, but Ayr had other ideas. Taking advantage of a couple of penalty awards, they had move deep into ‘enemy’ territory to set up their second try.

A series of quick recycles put Rory Carmichael just over the 22 and, as he was tackled, he got the ball off the deck to Climo who charged through, sliding the final metres to score next to the posts. He then converted for 19-25 to set up a thrilling final 10.

Heriots missed a penalty late on, but Ayr used a corresponding award of their own to move the ball back up-field.

With less than five minutes to go, Ayr performed a repeat of Heriots’ second try as they manufactured space down the right for Staffie McDowell to slide in at the corner. Climo missed the kick, but with three minutes left it was 24-25.

Heriots tried to do the sensible thing and keep the ball and won a penalty in the process, but then gave the ball back with a penalty in return. Ayr then kicked deep and set up a rolling maul to attack the Heriots’ defence.

Then the inevitable happened as one of the Edinburgh side, whether by accident or design, pulled the maul down as it crossed the five metre line giving Ayr a last-gasp chance for victory. Lining up from where he had missed a conversion a few minutes earlier, Climo kept his nerve and slotted home the 80th minute kick for 24-26 and another Scottish Cup for the Ayr trophy cabinet.