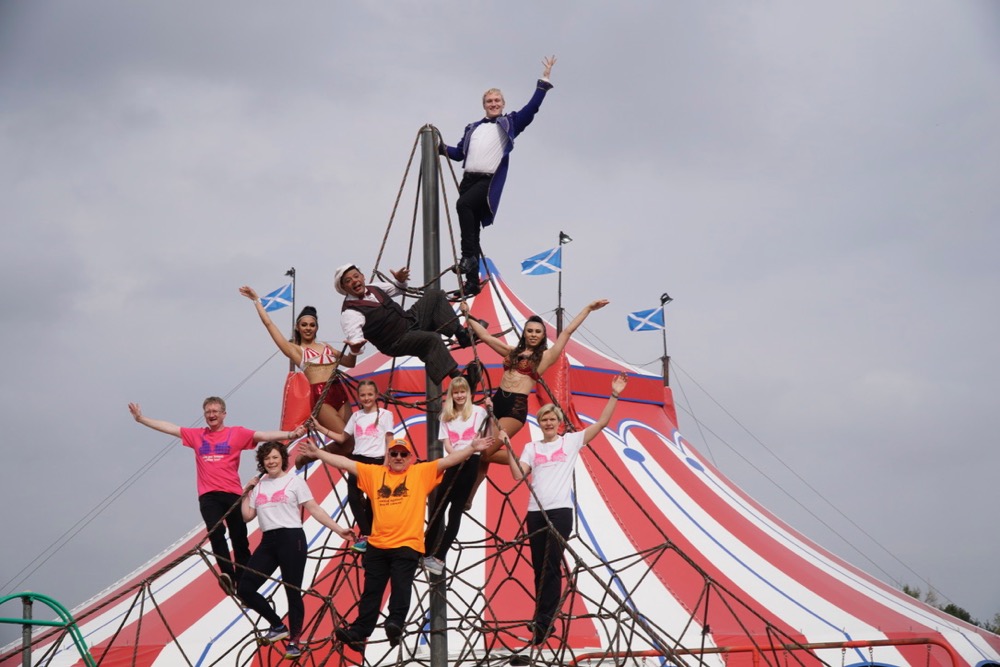 The fun of the circus came to Edinburgh this morning as walkers taking part in this year’s MoonWalk Scotland joined performers from Gandeys Circus to encourage others to join this year’s walking challenge.

Wearing Walk the Walk’s famous ‘bra t-shirts’, everyone got into the circus spirit with Chico the Clown, a Fire Breather, a Contortionist and Rolling Globe Performers from Gandeys to raise awareness of The MoonWalk. This year’s circus-themed MoonWalk Scotland is on Saturday 8 June.

Organised by grant-making breast cancer charity, Walk the Walk, The MoonWalk Scotland will see thousands of women, men and young people walking a quarter, half, full or double Marathon through the streets of Edinburgh at Midnight to raise money and awareness to help fight the disease.

Amy Young (12) from Edinburgh is taking on the 6.55 mile New Moon at The MoonWalk Scotland 2019, with her Mum, Dad, sister and a family friend. Amy said: “It was really fun to do the photoshoot at the Big Top, especially meeting all the performers. I hope it helps to make lots of people interested in doing The MoonWalk, because it is such a good thing to do. I can’t wait to help raise money and awareness for breast cancer.”

Jacqueline Morales, Aerialist Performer at Gandeys Circus said: “It’s been fantastic to support Walk the Walk and give people a taster of what to expect from the Gandeys show! We really hope the fun and excitement from today encourages more people to sign-up for this year’s circus-themed MoonWalk, especially ahead of World Circus Day.

“I was delighted to be asked to decorate some bras for Walk the Walk, which is an amazing and important charity that does so much to help people living with cancer in Scotland. My sister Gina and I proudly wore our circus-themed bras which are inspired not just by the big top itself, but the influential people who perform within it. Of course, the bras have been finished off with some beautiful rhinestones which is an iconic feature in traditional circus costume.”

Founder and Chief Executive of Walk the Walk, Nina Barough CBE said: A huge thank you to Gandeys Circus for such a fun-filled experience today and getting everybody in the mood to MoonWalk in June.  I hope it inspires more women, men and children to sign up and put one foot in front of the other and join our MoonWalk circus. With challenges from just 6.55 to 26.2 miles, there really is something for every age and ability. Come on folks, roll up! roll up! and help us raise money and awareness to support people living with cancer in Scotland.”

More than 86,000 Walkers have taken part in The MoonWalk Scotland since the event started in 1996, and so far, more than £21.3 million has been raised to improve the lives of those living with cancer in the country.

The MoonWalk Scotland is on Saturday 8 June. Sign up now at walkthewalk.org