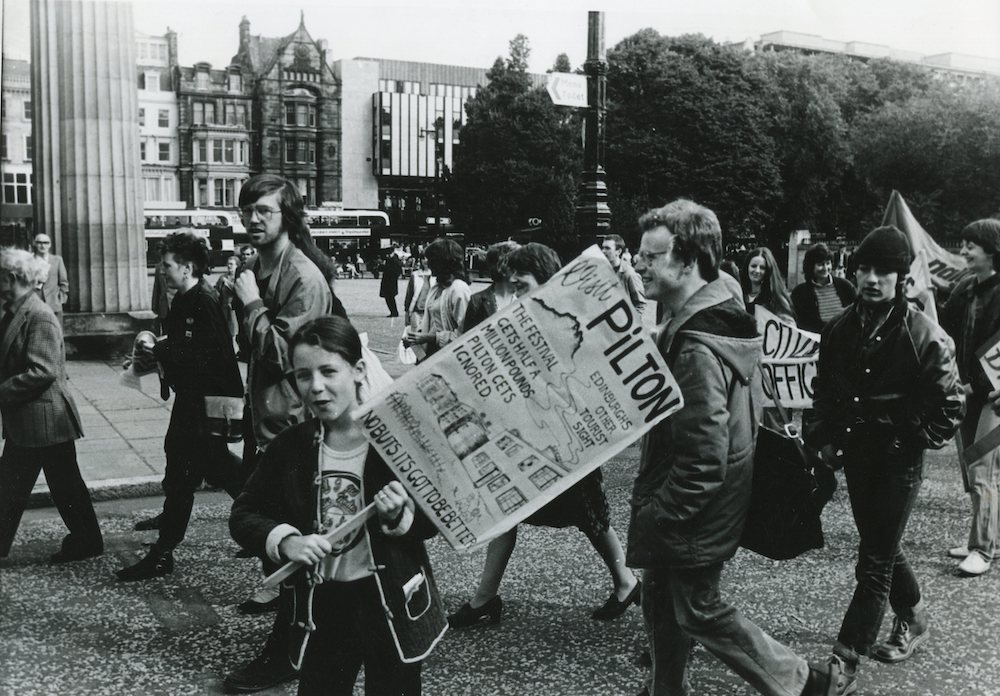 Using social media the Edinburgh Voluntary Organisations’ Council (EVOC) 150 team took exactly seven minutes to trace a young girl in a photo they are using in their anniversary storytelling. The photo had been taken during the 1970s to highlight a protest about damp conditions in housing in Pilton.

EVOC put the photo on Twitter and asked for help in tracing the young girl. They found out that it was Zoe Black.

Zoe said: “It took 7 minutes to find me, from when EVOC posted it on Twitter to when someone recognised that it was one of the Blacks. I got in touch and said who I was and that I was still campaigning. I had mixed emotions and thought ‘How have they got that photo?’. When I properly looked at it and remembered my jacket I got really upset and thinking back to when I was a kid.

“I kept thinking back to being brought up in Muirhouse, going to the beach, skiving school and all these things that we did. Once the emotion left, it was pretty cool!”

Zoe comes from a family that have been heavily involved in protesting and campaigning since the 1970s, and she is still raising awareness for causes today.

She said: “I am still protesting because I believe it is important to fight against injustice and we are still fighting the same things. The rich are getting richer and the poor get poorer, it’s the same slogan people have been saying since the 1970s.”

Finding Zoe, and learning that she was still an active citizen involved in her community, added something extra special to EVOC’s 150th Anniversary programme.

Lucy Ridley, EVOC 150 Programme Manager, said: “When Zoe or ‘the Pilton Girl’ got in touch, I was speechless. Finding her, and showing her some of the archived photo collection we have of protests and demonstrations in the same time period has really deepened our personal knowledge of who was involved and why they were involved in civic action at that time. It’s been a real joy to meet Zoe and her sisters, and to see that she is still protesting.”

EVOC which supports the third sector build and enable resilient communities, is celebrating 150 years with a year long programme of events and activities.