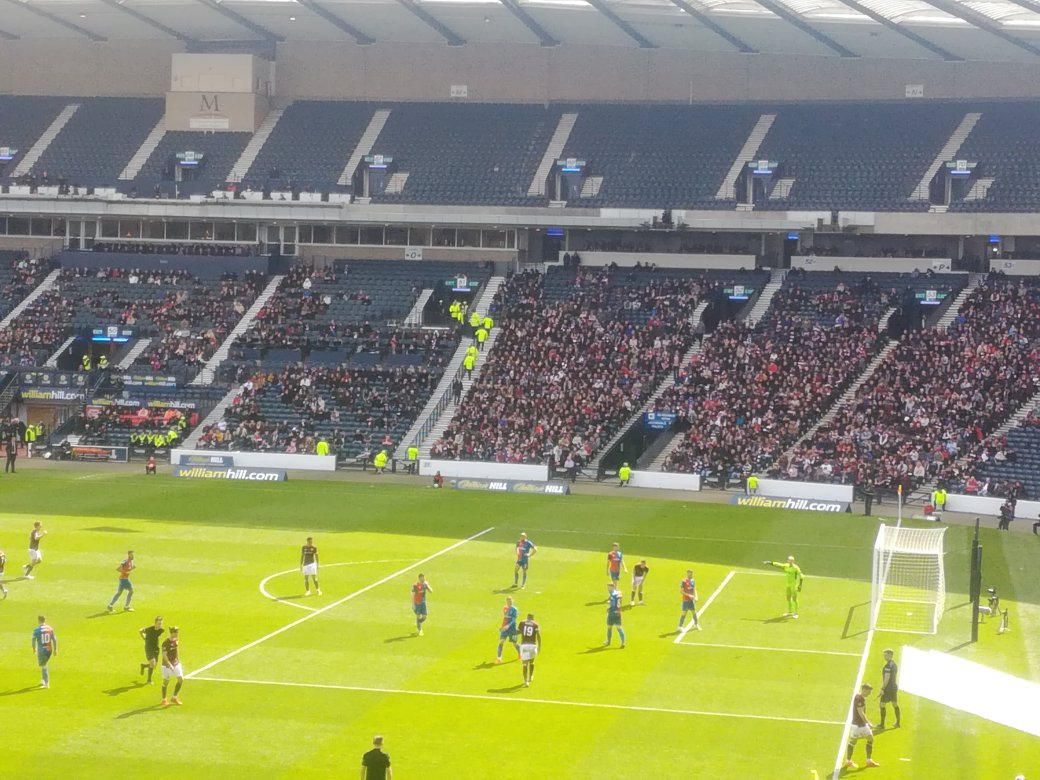 Hearts overcame a lethargic first half display to score three second half goals and book their place in the William Hill Scottish Cup Final next month. After a goalless opening 45 minutes, goals from Uche Ikpeazu, John Souttar and substitute Sean Clare secured a 3-0 win over Inverness Caledonian Thistle at Hampden Park.

Semi-finals are usually tense occasions and this one proved no different, particularly in the first half. Hearts boss Craig Levein made just the one change from the team that lost to Hibernian last Saturday with Sean Clare, struggling with injury this week, being replaced by teenager Aidan Keena. Clare dropped to the substitutes’ bench.

A rather disappointing attendance of just over 21,000 meant the National Stadium was less than half full. This may have contributed to a rather tepid first half. Hearts captain Christophe Berra had an effort blocked and Michael Smith a long-range shot which went wide.

Uche Ikpeazu then fired straight at Caley Thistle keeper Ridgers when he really should have passed to Aidan Keena who was in a far better position to score.

Half-time arrived with the game goalless and a chorus of boos greeted the Hearts players as they headed up the tunnel.

Whether Craig Levein had a few strong words to say to his troops during the interval isn’t clear, but Hearts came out a different side in the second half. Olly Lee thumped a typical long-range effort which Ridgers pushed over the crossbar. This roused the Maroon Army and in the 49th minute Hearts took the lead. Jake Mulraney, who had his best display in a maroon shirt, showed great determination to deliver a cross into the Caley Thistle penalty box where Uche Ikpeazu pushed the ball home before galloping over to the appreciative Hearts support in the stand.

Christophe Berra then headed wide but Inverness nearly equalised when a free kick from Chalmers was brilliantly saved by Hearts keeper Bobby Zlamal. How he managed to tip the ball on to the crossbar defied belief. McCart then thought he had equalised but his lob over Zlamal was ruled out for offside.

Midway through the second half Hearts doubled their lead. Olly Lee’s corner was headed on and the unlikely figure of John Souttar hooked home Hearts second.

The tie was finished as a contest with 15 minutes to go when Ikpeazu got on the end of Olly Lee’s pass and was brought down by Ridgers in the Caley Thistle penalty box. Substitute Sean Clare did his usual expert job from the penalty spot and Hearts had secured victory and a place in the William Hill Scottish Cup Final on 25th May. They will face either Aberdeen or Celtic who contest the other semi-final on Sunday. Hearts last reached the Scottish Cup Final in 2012 when they thrashed Hibernian 5-1 to lift the world’s oldest trophy for the eight time.

Craig Levein beamed his delight after the game. He told the official Hearts website:

“I think we ran out worthy winners. The first-half was a bit closer than the second. I thought we were a little bit nervous in the first-half and got rid of the ball quicker than we needed to.

“But, half-time came at a good time for us and we managed to settle the nerves a little. Once we got the first goal we were in complete control and other than the free-kick that Bobby saved I don’t recall any major chances for Inverness.”

“Jake Mulraney’s been showing in glimpses how devastating he can be when he gets on the ball and attacks and plays on the front foot. He’s shown that in a lot of matches, but he hasn’t put together a performance like the performance he put on today.

“He’s not a guy who’s blessed with the most confidence so I think this will help him enormously and I was really chuffed with him today.”