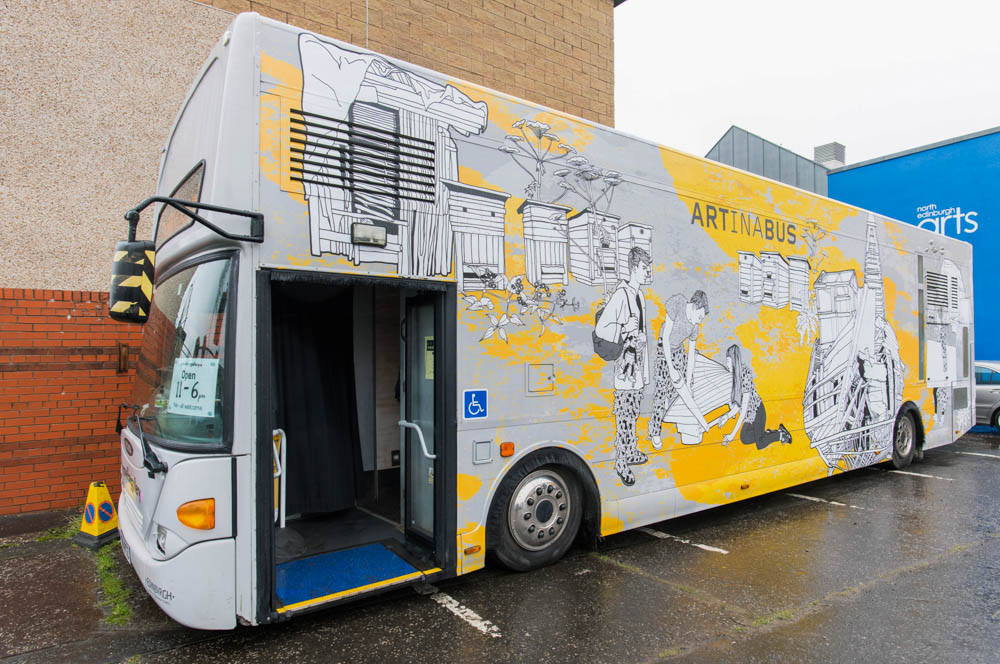 Travelling Gallery, which celebrated its 40th anniversary last year, announces Displaced as its first 2019 exhibition, continuing its function and core mission to take its exciting and experimental programme to every part of Scotland, allowing access and learning for all. The new tour launches at North Edinburgh Arts and is accompanied by a series of workshops aimed to broaden access to arts as part of the City of Edinburgh Council’s ‘Culture Service Project Fund (Promoting Access)’ in partnership with The Royal Edinburgh Military Tattoo. The workshops will provide an additional opportunity for the audience to be actively involved in the exhibition and compliment the important themes running through Displaced. The additional workshops will take place across Edinburgh including WHALE ARTS, Inch Community Centre, Ratho Library, Drumbrae Library and Sikh Sanjog.

Through film, photography, painting, and printmaking, Displaced explores how artists are responding to global migration and the refugee crisis now. With ongoing international conflicts and the continued displacement of human beings, artists are asking audiences to question how we view, understand, and represent refugees and migrants.

Displaced is an international exhibition which focuses on crisis abroad but also shines a light on Europe and our own country; charting journeys and often using transport, architecture, and landscape alongside human experience. Each contributing artist began their projects by placing themselves next to and amongst those who have left their home. They have listened to their stories and worked alongside International Aid Organisations to understand and represent their struggle, beyond victimhood as outlined below.

Brendan Bannon –  Travelling Gallery is pleased to be exhibiting photographs taken by young Syrian refugees during workshops led by internationally renowned photojournalist Brendan Bannon. Supported by the U.N. High Commission on Refugees (UNHCR) Bannon spent time with the young photographers at refugee camps in Lebanon and Jordan – countries which hold the highest and second-highest rate of refugees per capita in the world, according to U.N. data – teaching them how to work and be creative with a camera.

The resulting images capture the unimaginable loss and disruption caused by war and forced migration, however they also show a lively sense of play, community, and family. Brendan gives the young refugees freedom and skills to express themselves and allows the audience a true understanding of their lives – away from the usual clichéd media images.

Halil Altindere – Covering the gallery wall is Turkish artist Halil Altindere’s large billboard-sized print Köfte Airlines. The dangerous and impossible image highlights the barriers and double standards refugees face in their movement and travel to and from Europe. For example, a British citizen in Turkey wishing to get a plane ticket to Greece, can present their passport and relatively easily and inexpensively board the plane. In contrast, someone in Turkey with a Syrian passport does not have the correct documents to take the same flight. Resulting in many Syrian refugees being forced to make the dangerous journey through Mediterranean & Aegean Seas to Europe in pursuit of a better life.

Altindere directly explores these hypocrisies in Köfte Airlines openly criticizing the EU policies on refugees. For the ambitious work Halil collaborated with a group of Syrian refugees based in Canakkale, Turkey, and asked them to climb on the top of a plane as a reference to their own forced and dangerous journey as well as a reminder of the middle eastern tradition of train surfing.

Halil Altındere belongs to a generation of Turkish artists who substantially shaped the cultural emergence of Turkey since the 1990s. His art explores questions of migration, sub-cultures, identity, and gender as well as the influence of contemporary Western art movements on the current creative scene of Turkey.

Alberta Whittle – Alberta Whittle draws from her Barbadian roots and current home in Scotland to retrace and undo our rigid ideas of histories, politics and culture. In Lessons in Welcome, the brightly coloured paintings shout out “When are you Leavin?”, not exactly a permanent and warm welcome, instead suggesting a more transient and uncertain visit. The works directly ask the viewer to reflect how we welcome people to our country.

Alongside Lessons in Welcome Whittle’s film Sorry Not Sorry asks the viewer to recognise the recent Windrush scandal. Using her own film footage, alongside advertising campaigns and a powerful David Lammy speech, the film juxtaposes tourism and sugarcane cultivation in the British Caribbean to display a commanding compilation of double standards, hostile environments, and identity.

Elizabeth Kwant – Bringing the conversation home to the United Kingdom Travelling Gallery is exhibiting the series Habeus Corpus by Edinburgh College of Art graduate Elizabeth Kwant. This series of screen prints and banners distorts the distinctions between travelling for leisure and travelling for necessity. The stylised prints are reminiscent of vintage travel posters; advertising escape, romance, and relaxation.

However, instead of a luxurious destination the prints show the interior of five Immigration Removal Centres in the United Kingdom, stating the location and capacity. Every year, tens of thousands of immigrants are taken to and held in Immigration Removal Centres for an indeterminant time while the authorities seek to deport them. Faced with the stark institutional images, the viewer is asked to consider the conditions and treatment faced by immigrants detained in any of these locations.

Broomberg and Chanarin –  The powerful and emotive film, The Bureaucracy of Angels, by Broomberg and Chanarin records the demolition of 100 migrant boats in Sicily, Italy, in the winter of 2016. These boats arrived laden with refugees from North Africa and while their human cargo was either sent home or absorbed into the asylum system, the boats themselves were never returned to their owners, lying beached on the concrete forecourt of Porto Pozallo in Sicily.

The wasteful destruction of the boats is final and emphasises the critical one-way journey taken by the refugees. There was never going to be an option to return. The large jaws of a digger, whose job it is to destroy the boats, narrates the film while a Cantastoria or ‘story-singer’, recounts the famous Sicilian ballad ‘Terra ca nun senti’. The poignant song speaks of the fear and pain associated with immigration to and from Europe’s most southerly territory over the last 150 years.

The artists filmed the rescue missions by the Migrant Offshore Aid Station (MOAS) foundation off the coast of Libya as well as the destruction of the boats left to decay once the migrant journeys have been made, a process that took forty days to complete.

Councillor Donald Wilson, the city’s Culture and Communities Convener, said: “Once again the Travelling Gallery will be host to a unique and thought-provoking exhibition, displaying for the first time in Scotland cross-artform work from acclaimed international artists.”

“The Travelling Gallery curators have taken art straight into the hearts of town centres for decades, both rural and city communities, supporting the goal of broadening access to the arts. This is a perfect example of our determination to widen and deepen participation in culture very much taking it ‘to the people’ wherever they may be. This is an important and innovative exhibition and I hope everyone takes the opportunity to pay it a visit.”

Claire Craig, Curator of The Travelling Gallery said: “We are thrilled to be touring these important and timely artworks across Scotland. The artists involved in the exhibition all want to give a strong voice to those who do not have one and we are looking forward to continuing their stories and having discussions with our diverse audience.”

Rucelle Soutar, Chief Operating Officer for The Royal Edinburgh Military Tattoo said: “The Royal Edinburgh Military Tattoo takes great pride in being able to support some of the wonderful arts projects taking place in our city and beyond. We are delighted to be able to help Travelling Gallery’s Spring Tour take to the road in 2019, showcasing acclaimed artists, telling incredibly important stories.”

Speaking of Displaced Brendan Bannon said: “Usually we only learn refugee stories from journalists, […} In this project we get to hear from the refugee young people themselves, what they have to tell us about the complex and challenging lives they are living. The photos address tragic and traumatic issues—heartbreaking issues—but also show us people in extreme circumstances completely engaged in life, shaping their own stories of survival.”

On ‘Sorry Not Sorry’ Alberta Whittle said: “Sorry Not Sorry is an offering to the ancestors. Witnessing and feeling powerless against the ongoing horrors experienced by the Windrush generation is a devastating blow to humanity, not just those of us who identify with this community. Our grandmothers, grandfathers, mummies, daddies, aunties, uncles, cousins, brothers, sisters, chosen family and friends are in real danger. This evil rhetoric of discrimination and false apologies must end.”

“We are all witnesses. We are the spirits that walk amongst you.”