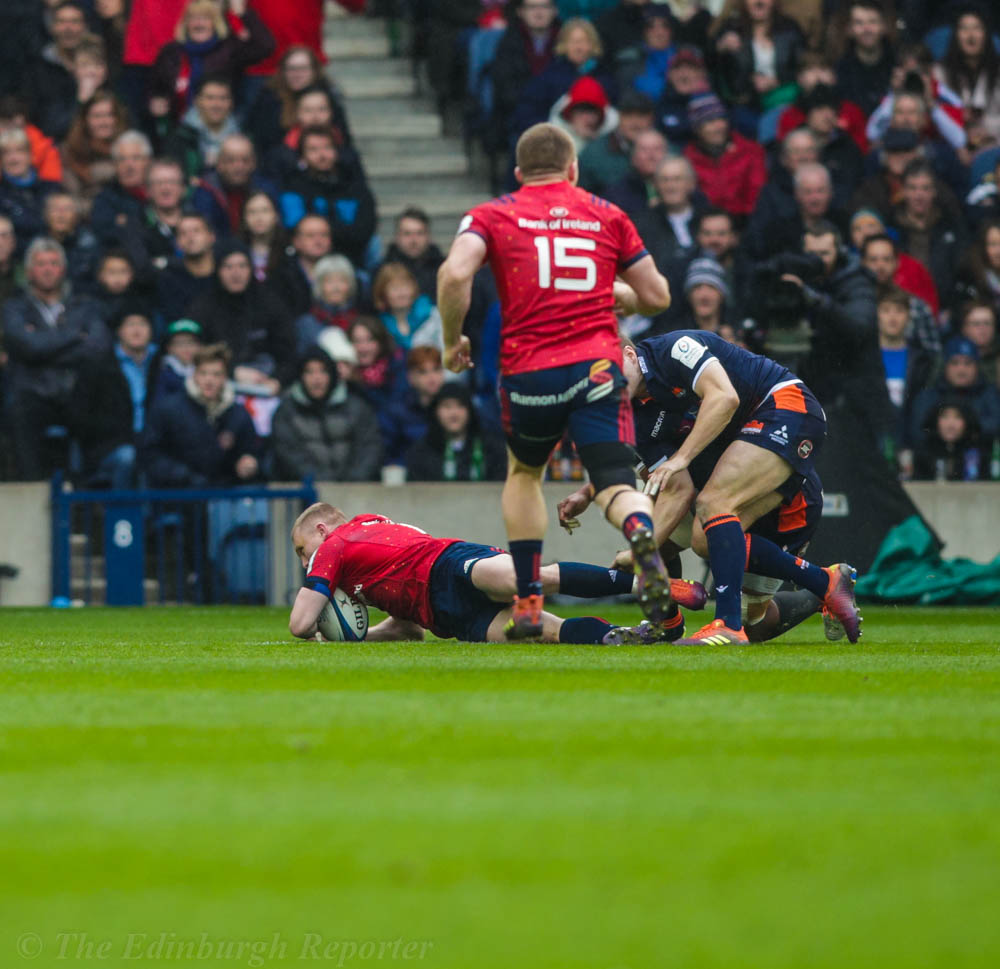 Over 36,000 spectators turned out to watch Edinburgh’s first European Champions Cup Quarter-final for several years on Saturday afternoon at BT Murrayfield. Their opponents were Ireland’s perennial, final-stage ‘fixtures’, Munster. Although the home side had beaten both Montpelier and Toulon – twice in the case of the latter – in the Group stages, it was widely recognised, that come the knock-out stages, the likes of Munster would be an entirely different prospect.

On entering the stadium surrounds, one could have been forgiven for thinking that about 35,000 of the 36,358 were going to be Munster fans, but the locals had indeed turned out in force to watch one of the best matches of the current season.

The first 15 minutes, or so, of the match were very much end-to-end. Worryingly for the visitors, it was mostly a case of up to their end, turn over and clear the ball, then face another attack back to their end.

Worryingly for the home side, it was very much a case of being unable to break down Munster’s legendary defence. Despite a couple of penalties – one in the first couple of minutes – the home side couldn’t break through. They were within a metre, or so, via the pack on a couple of occasions, but the visitors either turned the ball over or forced a penalty to clear.

Edinburgh were then unable to take advantage of a yellow card for Munster’s Tadgh Beirne, and the Irish side were soon on the offensive at the other end.

Winning a scrum five metres out, they turned it into a penalty when Edinburgh’s scrum-half, Henry Pyrgos batted the ball down as his opposite number tried to get the ball away. A quick-thinking Keith Earls then showed his Man-of-the-Match potential by taking a quick tap penalty and sprinting in from around 6 metres out for the first try.

Edinburgh protested Pyrgos being upended, but he had been penalised first, so the try stood. Joey Carberry then converted for 0-7 just before the end of the first quarter.

From the restart, and following another round of turn-overs, Edinburgh were soon encamped again on Munster’s five-metre line, but hoping for a better outcome this time around. Once again the pack went to work, but with the backs hovering, a different route to the line was chosen.

A couple of passes off the back of the rucks had the ball with Chris Dean and the centre blasted through the visitors’ line to go over for the home side opener. The ever reliable, Jaco van der Walt then converted to level the score at 7-7 with around 28 minutes on the clock.

The remainder of the half was, once again, dominated by the home side with a large part of Munster’s troubles caused by the mercurial Damien Hoyland and his partner in mercurial-ness, Darcy Graham. With Bill Mata aiding and abetting the pair, the home side were looking dangerous on the break.

However, they had to settle for a 35th minute penalty from van der Walt for a 10-7 lead to take into the interval.

The second half started slightly more evenly balanced than the first, but it was Munster who were first on the score board with a 46th minute penalty from sub, Tyler Bleyendaal to even up the points tally at 10-10.

Less than five minutes later, the home side regained the lead when van der Walt slotted home another penalty from out wide for 13-10.

As the clock started to approach the hour mark and the subs started to roll on, Edinburgh won a penalty deep in Munster territory and were, once again, looking likely to add to their lead. And, once again, it was the dynamic duo of Hoyland and Graham who, almost, came up with the goods.

Hoyland had got close down the right before being bundled into touch, but Graham managed to get closer still down the left, but his path the the line was closed off by Earls and he was thrown into touch. The referee came back for an Edinburgh penalty, but the momentum they had built up, fizzled out and Munster cleared up.

The turning point came with about 10 minutes of the match left. The home side were easily managing their lead when Graham was taken out by a late – by about five minutes late – Tadge Beirne, tackle on half way, immediately winning an advantage from the officials. Unfortunately, this was, equally immediately, reversed when the same officials spotted prop, Pierre Schoeman, flattening the perpetrator with a big shoulder, leading to a break in proceedings while Beirne was treated by the physios.

And it was this reversal that, ultimately, ‘lost’ Edinburgh the match. Going for the corner, the subsequent lineout went long, but a fortunate bounce found Bleyendaal who attacked the line. He then used both his centres to cause a bit of confusion in the defence, before, that man Earls got on the end of the sequence and a long looping run saw him dive over in the corner for the try and a two-point lead.

Bleyendaal then finished off the play he started by converting from near the touch line for 13-17 with less than 10 minutes to play.

Or, as it turned out, with more than 10 minutes to play as Edinburgh returned to the offensive game they had enjoyed for the majority of the match. But it wasn’t to be though as, despite advancing deep into Munster territory in overtime, they lost the ball, and the match, to the visitors from across the Irish Sea, thus ending their involvement in the 2018-19 European Rugby Champions’ Cup with that 13-17 defeat.