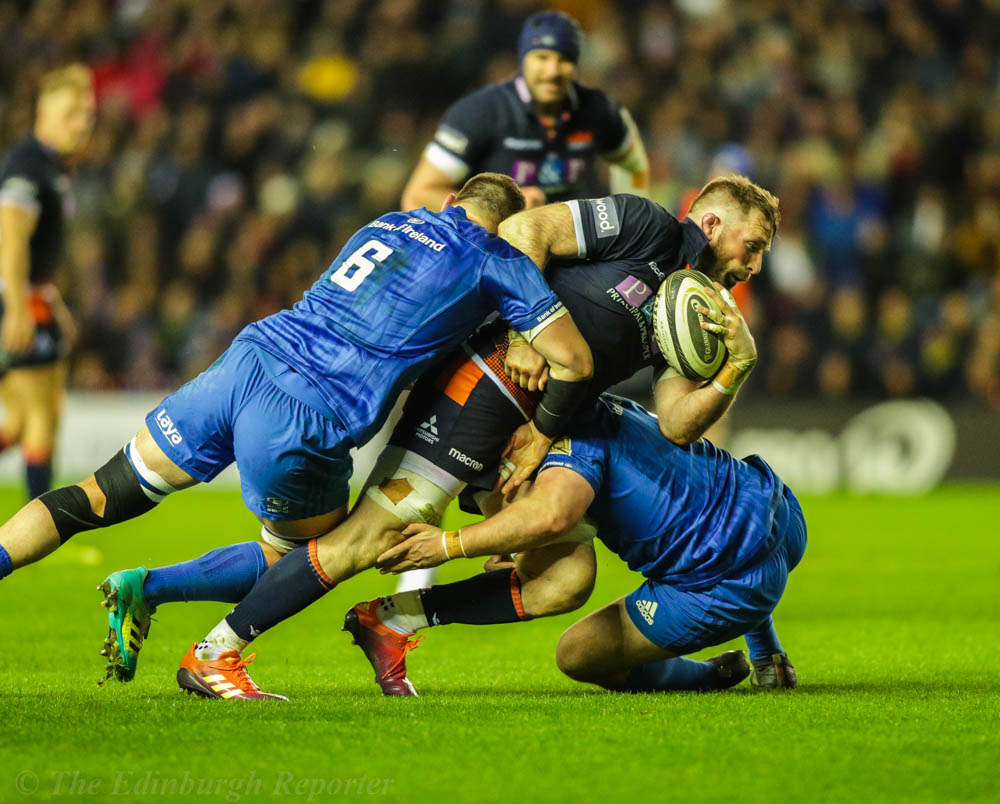 Ireland’s Leinster were the opposition in Friday night’s Guinness PRO14 match at BT Murrayfield in a game which, not only saw the welcome return of Matt Scott, but also heralded John Barclay’s long awaited debut for the home team.

Edinburgh fielded a quality side in the face of, what was probably, not Leinster’s strongest pick, but, there are no ‘gimme’ matches in this year’s tournament and, with Edinburgh needing to win at least three of their remaining four matches, it was off to work.

However, it was that ‘weak’ Leinster side who put in the early work, pressurising the home defence deep in their territory, before a turn over gave Edinburgh the chance to clear. But not for long as a short-range, seventh minute penalty from 10, Ciaran Frawley, put the visitors 0-3 ahead.

Less than 10 minutes later they were 0-8 ahead. Edinburgh had enjoyed a period of possession without really threatening the line, but, had the faithful had seen Jaco van der Walt hitting the post with a penalty, followed by further misfortune, as lock, Fraser McKenzie, was carded for dangerous play.

The latter gave Leinster the chance to work up-field but it was a penalty kick to the corner that put the visitors in with a scoring chance. Winning their lineout, a couple of recycles put Sean Cronin through a gap and the hooker came up with the points. Frawley missed the conversion, but with 15 minutes played, it was 0-8 to Leinster.

A large part of the next 15 minutes were played deep in opposition territory as Edinburgh got their act together and turned up the heat. A couple of shots at goal were turned down in favour of the line and the resultant forward play set the tone for large parts of the match.

Getting close from one set-up down the left, Edinburgh lost the ball as a stray foot got in the way, but it wasn’t too many minutes before they were back, knocking on the door of the visitor’s try line.

The home side’s opening try came from a series of rucks and mauls, which worked their way in from the right touch line, before WP Nel burrowed through under the posts for 5-8. van der Walt then converted to take the score to 7-8 with just under 10 minutes of the half to go.

Frawley extended Leinster’s lead on 35 minutes with a penalty for 7-11, but the final few minutes of the half belonged to the home side. Driving the opposition back into their ‘red zone’, Edinburgh forced the visitors to take the ball back over their line and so won a five-metre scrum.

A five metre scrum that turned into a series of five-metre scrums before the referee had had enough of Leinster infringing and awarded a penalty try as the clock ticked over the 40 minutes. With no need for a conversion, that left the half time score at 14-11, with the home side looking in the ascendancy.

That ascendancy continued after the break as Edinburgh soon had Leinster defending for all they were worth in their own 22. With several more penalties, the visitor’s Dan Leavy tried the referee’s patience once too often and he saw yellow, giving the home side a man advantage while encamped on the opposition five-metre line.

Once again, it wasn’t pretty, but it was pretty effective as the pack bullocked their way across the pitch, making enough space down the line for hooker, Ross Ford to smash through for try number 3. With van der Walt converting, the home side now had a 10-point lead at 21-11.

With 30 minutes to go, Edinburgh made a couple of changes in their back division, but this didn’t get in the way of the pack’s desire to add to their points tally for the evening and, for a large part of the next 10, or so, minutes, the ball stayed firmly with the big boys.

The fourth – and bonus point – Edinburgh try was, once again, down to brute force as the forwards held play tight and spent the best part of five minutes in a series of pick-and-goes before lock, Bill Mata, drove through near the posts for the score and 26-11. With Simon Hickey having taken over the 10 duties, it was still business as usual, and his conversion stretched the score out to – what was to be the final score – 28-11 with just over 15 minutes left.

And that was, more-or-less, that. Leinster put in a huge effort near time, but, unfortunately, their forwards were disappointed as, although they forced the ball over the line, the defence managed to get in between the ball and the ground, so it was ruled ‘No try’, thus sealing a fine win for the home side, who now head into next weeks ERCC quarter-final, pretty much, at full strength.

When asked after the match what his tactics were likely to be for that match, Edinburgh coach, Richard Cockerill, kept it typically short. “Win!”…