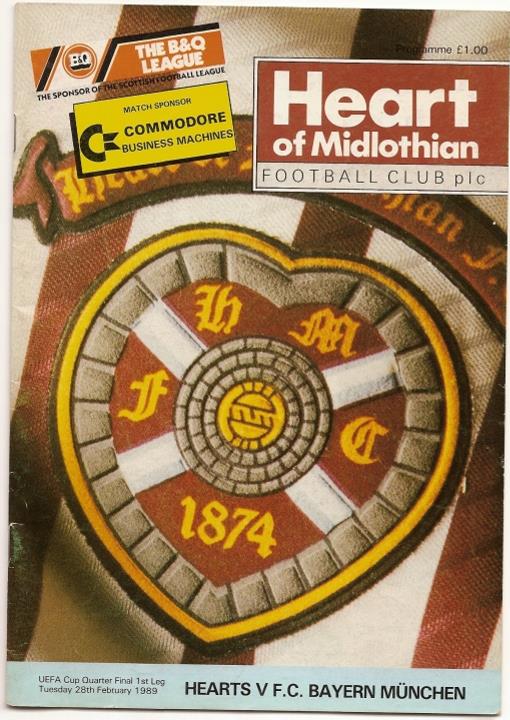 On 28th February 1989, Hearts pulled off arguably their best ever result in European competition. Mike Smith was at Tynecastle that night…

The old cliché that there are no easy teams left in the quarter finals of a cup competition was trotted out on more than once occasion at the beginning of 1989. And so it proved when Hearts – the last of the Scottish hopefuls still left in Europe having enjoyed a memorable run by defeating St. Patrick‘s Athletic, Austria Vienna and Velez Mostar – were paired with Bayern Munich when the draw was made for the last eight of the UEFA Cup.

In just six years, Hearts had progressed from playing the likes of Clydebank and Dumbarton to playing one of the biggest names in Europe in the latter stages of a major European competition. The first leg was played at Tynecastle on February 28th and more than 26,000 fans – including a smattering of expectant Germans – headed for Gorgie on a cold winter’s night.

Legendary striker John Robertson was only on the substitutes’ bench as he was recovering from injury, but it was a chance for Iain Ferguson to reproduce his goalscoring feat from two years earlier when he scored for Dundee United against Barcelona at the Nou Camp Stadium. Bayern were confident – the Germans are always confident – and the talk in the Munich camp before the game was of how much of a lead they were going to take back to Germany for the return leg. And as the game began in a tumultuous atmosphere it appeared Hearts had been listening a tad too closely to their more illustrious opponents. The maroons began cagily with the three Macs at the back – McLaren, McKinlay and McPherson – preferring to cautiously play the ball back to safety rather than incur the wrath of a Bayern team not unaccustomed to such occasions.

Further forward, John Colquhoun appeared to be sucked into a midfield role leaving Iain Ferguson as the lone striker but with Mike Galloway and veteran Eammon Bannon providing support. After thirteen minutes, a misplaced pass from Ferguson went to Thon who delivered a superb pass to the Swedish striker Johnny Ekstrom whose flick just went past the post. Shortly after Ekstrom fell down in the penalty box after a challenge form Craig Levein but the Austrian referee ignored German (and Swedish!) pleas for a penalty. Hearts, if truth were told, were struggling to make an impact. A highlight of their European campaign had been the strength of Mike Galloway up front, but Bayern had clearly done their homework and Galloway was struggling to even touch the ball, far less maintain his impressive scoring record. However, after half an hour, Hearts finally threatened when Eammon Bannon delivered a tantalising cross which keeper Aumann could only punch out. Tosh McKinlay rattled the ball into the net but Hearts celebrations were soon muted when the referee blew for a foul on the German goalkeeper.

Bayern were clearly rattled by the physical nature of the game. Kenny Black, never averse to a challenge or two, lunged in on Reuter and the German reaction was not unexpected. Thon responded with a brutal tackle on John Colquhoun and as tempers frayed the game threatened to get out of hand. If the referee was loath to show anyone a yellow card he had little choice when Alan McLaren kept his foot high when he went for a fifty-fifty ball and the teenage defender was booked. Bayern had threatened on a couple of occasions in the first half but there was precious little incident around either penalty area. Hearts manager Alex MacDonald had stressed before the game the importance of not conceding the dreaded away goal and when half-time arrived we hoped Hearts would at least look like scoring a goal in the second period.

Hearts did indeed throw off their shackles at the re-start. Just three minutes had gone of the second forty-five when Craig Levein sprayed a long pass to Mike Galloway. The former Halifax Town player turned the ball across goal, out of the reach of Iain Ferguson but towards Eammon Bannon whose effort cannoned off a Bayern defender. The 26,000 plus crowd roared their approval as hopes rose that the Jambos would make the breakthrough. After fifty-four minutes, Ferguson rifled in a free-kick which brought a fine save from Aumann and the huge Jambo contingent sensed the breakthrough was imminent. It came barely two minutes later. Kenny Black was brought down on the edge of the penalty box, just in front of the Tynecastle shed. The practice put in on the training ground was about to pay off. The unlikely figure of Tosh McKinlay stood alongside Iain Ferguson as the Germans tried to figure out the threat. Tosh discreetly rolled the ball to Fergie who let rip with a rasping shot which flew high into the net. Delirium at Tynecastle! Standing in the shed, I was hurtled several rows down the terracing as Hearts fans celebrated wildly.

Spurred on by a cacophony of noise from the home support, Hearts continued to drive forward with Ferguson and Colquhoun going close to extending the lead. But Bayern were dangerous on the counter-attack and the ever-dangerous Thon seemed set to score a vital away goal only to be denied by a last gasp tackle from McKinlay. Thon’s frustration soon showed when he was booked for another crude challenge on Colquhoun who also took an arm in the face from Pfugler shortly afterwards – but the referee missed the incident. It was patently obvious that Bayern were rattled, and their discomfort could and should have been increased eight minutes from the end when Dave McPherson found himself all alone in the Bayern penalty box – only to scoop the ball over the bar from ten yards out! The Germans didn’t know what hit them and they clearly took the option for damage limitation as the game drew to its close. When the referee blew his whistle for full-time, Hearts had secured their most memorable victory in European football. They had beaten the mighty Bayern Munich 1-0 and they headed for the Olympic Stadium a fortnight later in high spirits.

Of course, this wouldn’t be Hearts without a hard luck story. Wearing their away candy-striped shirts, Hearts survived an edgy start in Munich to look the likelier team to score. Until Klaus Augenthaler smacked in a shot from thirty-five yards which left keeper Henry Smith helpless. Alex MacDonald had warned his players beforehand about the threat of Augenthaler and was clearly annoyed that his players didn’t heed his words. The scores were now level on aggregate but still Hearts had chances to notch a priceless away goal. John Colquhoun in particular had two glorious chances – one of which clipped the post. Hearts were just inches away from a fantastic achievement – but, inevitably, the game’s second goal was scored by the home side. Bayern won 2-0 on the night and 2-1 on aggregate. While the Germans had criticised Hearts for their physical approach in the first game in Edinburgh, they were quick to praise Alex MacDonald’s side after the return game, saying Hearts were one of the best teams to play at the Olympic Stadium for some time. Hearts had done themselves – and Scotland – proud with their performances.

Whilst on holiday in Gran Canaria a few years ago I was chatting to a Bayern supporter in a bar (as you do) and when I mentioned I was a Hearts fan he immediately replied ‘ah, yes, I was at the game in Edinburgh in 1989’. Clearly Hearts made a big impression on a memorable night!

Christmas market – numbers will be limited