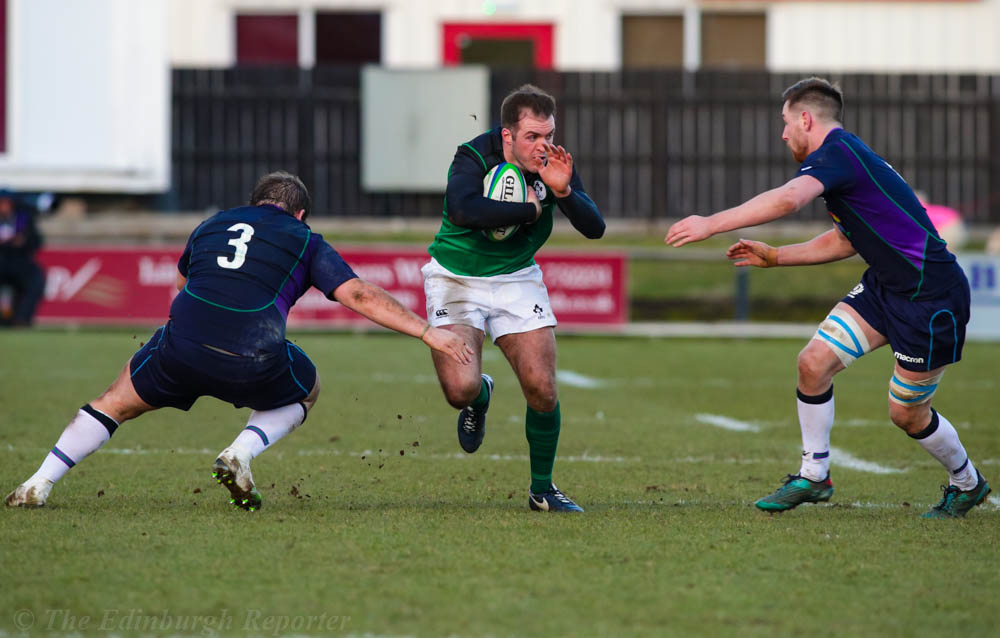 With the pitch at Myreside declared unplayable, Scotland XV’s club match against an Ireland XV was moved to Galashiels’ Netherdale ground and a 3:30pm kick-off. With around half the Scotland team made up of players from the Edinburgh sides, it was a chance to shine on an International stage

By three minutes in, Ireland were 3-0 ahead thanks to a penalty from stand off, Aidan Moynihan. From the restart, Scotland enjoyed a brief period of possession before a missed line out gave the ball back to the visitors and they made some territory, before a second penalty just outside the home 22, gave Moynihan his second successful kick for 6-0.

Following the restart, once again, Scotland kept the ball, but were struggling to make much ground and play was more inclined to side-to-side rather than up the field.

Reward for the Scots came in the 16th minute, though, when No. 10, Gregor Hunter, slotted home a long range effort for 6-3.

Ireland then turned up the gas a bit and dominated play for the next ten minutes, moving the ball well and forcing the Scots back into their 22.

A yellow for Hunter was followed up by the first try of the match. The kick went to the corner and Ireland, securing the line out, piled over the Scots’ pack for a, disputed but awarded, try. With the score notched up to second row, Conor Kindregan, Moynihan converted for 13-6.

Although the home side saw a bit more of the ball, and scored a 32nd minute penalty for 13-6, Ireland were still on top and, just before the break, they managed to cross the line for a second time, but the score was disallowed for a handling infringement.

It took Ireland 16 minutes in the second half to score their third penalty of the match, Moynihan providing the points for 16-6, but the visitors were clearly the better side and always looked in control.

Despite a 21st minute penalty from Hunter for 16-9, it was only matter of time before Ireland scored again.

This they did in the 34th minute from another pack rumble, Luke Cahill emerging for the try this time around. With the conversion going over, the score was now 23-9 and there appeared to be no way back for Scotland.

This proved to be the case and, at 23-9, Ireland closed off the match as they had started, on the attack, leaving a, fairly ordinary, Scots side to ponder next weeks return encounter.