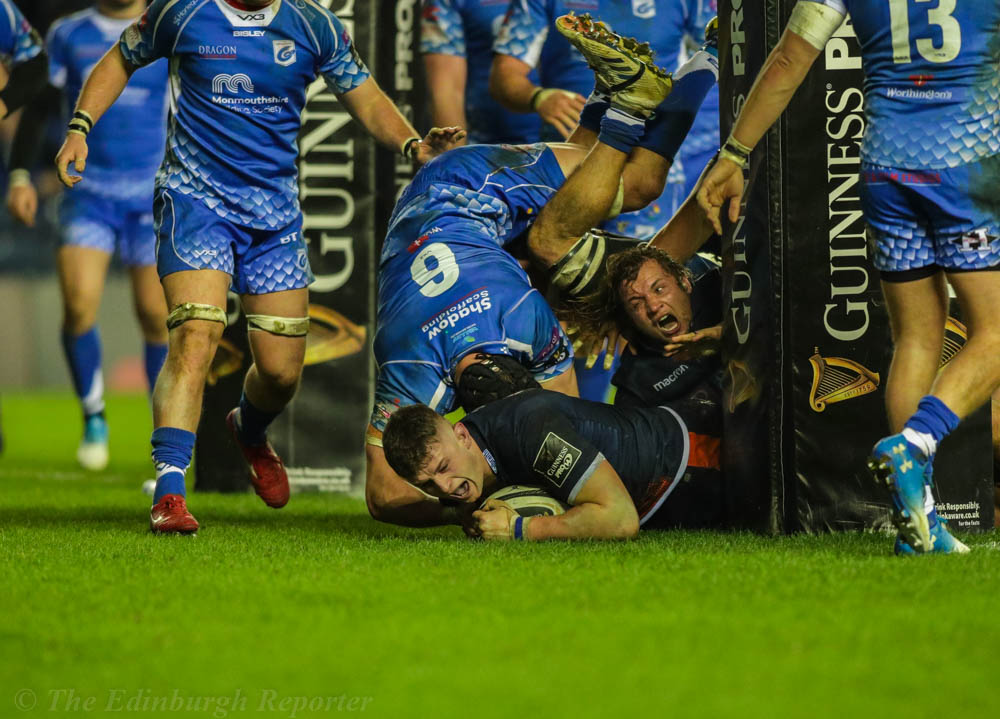 Newport-Gwent Dragons were the first of the two Welsh teams – Cardiff Blues next week – to make the trip up to BT Murrayfield during the Guinness 6 Nations hiatus to play an Edinburgh side who are flying high in the European Cup but not quite so high in the PRO14. Third in their conference, but sixth overall before the match, the home side fielded a team shorn of International players, but which still had a quality look. Dragons, on the other hand, brought a fairly settled side up with the likes of Gavin Henson and Zane Kirchner on the bench. On the bench….?!

Edinburgh made modest gains soon after kick off, but once the Dragons had the ball, they looked more menacing and only a, potential, try-saving tackle from Jaco dan der Walt on the five metre line stopped an early score. Penalised at the subsequent breakdown, the visitors found themselves in retreat soon after.

Nine minutes in and the first points were on the board. Edinburgh had rapidly advanced up-field and driven the defence into their 22. The back division, through Chris Dean and Darcy Graham, made further inroads before handing James Johnstone the task about 10 metres out. He then burst through a couple of tackles before fighting over the line next to the posts for the opener. Van der Walt then stepped up to convert for a 9-0 lead.

Three minutes later it was all square. While Edinburgh appeared to be, metaphorically, still patting themselves on the back, the Welsh side got to work and fairly easily drove deep into home territory, pulling the defence narrow with a fine move through the hands. Tyler Morgan received the ball in the clear and then had the, relatively, easy task of galloping home down the left for the try. No. 10, Josh Lewis, then stepped up to convert and draw the sides level at 7-7.

While everyone was still trying to draw breath, Edinburgh pulled ahead once again. Quickly recovering the ball from the restart, Graham, broke clear up the centre. With nobody near to laying a glove on the wing, he was able to get his pass away to Johnstone and with a clear run in, it was try Number Two for the centre. Once again, van der Walt converted and it was 14-7 after 16 minutes.

While everyone, etc, etc.

The second Dragons try was another straight run in, but for a different reason. While the home side were busy trying to get settled high in their own half, a loose pass landed in hands of Morgan and, once again, the centre charged off into empty space to record his second try of the night. And, with Lewis’ conversion, it was, once again, a tied match at 14-14.

Just over five minutes later, Dragons were ahead. With Edinburgh trying to work the ball clear, eventually the aerial route was chosen by Henry Pyrgos to clear the lines. As scrum half, Rhodri Williams was about to land after gathering the high ball, Dean tackled him just too early and, as a result, a kick-able penalty was duly kicked by Lewis to put the visitors in the lead for the first time at 14-17.

Despite another couple of penalties coming Edinburgh’s way, with no further scoreboard progress being made, the half time break saw the score at that 14-17 to Dragons.

With Graham just failing to get a hand to an in-goal bouncing ball, Edinburgh began to dominate proceedings early in the second half. A missed attempt at goal from Lewis was countered on 56 minutes by a successful attempt from van der Walt to draw the sides level at 17-17, starting an attacking surge that the Dragons couldn’t contain.

First up was a drive-over try from the returning-from-injury, Magnus Bradbury. Winning their penalty line out on the opposition five-metre line, the ball was then kept with the pack and rucked and mauled along the try line. As the melee approached the posts, Edinburgh began to put more pressure on the defenders and, under the posts, Bradbury was driven over the line by the pack, fronted by Pierre Schoeman, for the third home try. Van der Walt’s conversion then made it 24-17.

Five minutes later, van der Merwe scored the bonus-point try for Edinburgh. Having been difficult to contain down his wing for most of the match, the South African came up trumps on 69 minutes following a well put together passing move by the backs. It wasn’t quite a straightforward run-in for the wing as he was pulled down about 10 metres out, but not held. He then rolled straight back onto his feet and carried on to dot down in the left corner for, what seemed like, his millionth try since joining the squad. Countryman, van der Walt, however, missed the conversion, but it was 29-17 to Edinburgh.

The final 20 minutes of the match were, despite the Dragon’s introduction of Henson and Kirchner (why were they on the bench…!?), dominated by the home side and the match was rounded off by a second, slightly easier score (his millionth-and-one…) by van der Merwe on 79 minutes, the ball coming to him from a neat, pop-pass by Dougie Fife. Van der Walt stepped up to convert, but hit the post, failing to add to the points tally.

The final whistle went less than a minute later to round off a fine 34-17 win by the home side missing all those ‘essential’ players away on International duty with Scotland.