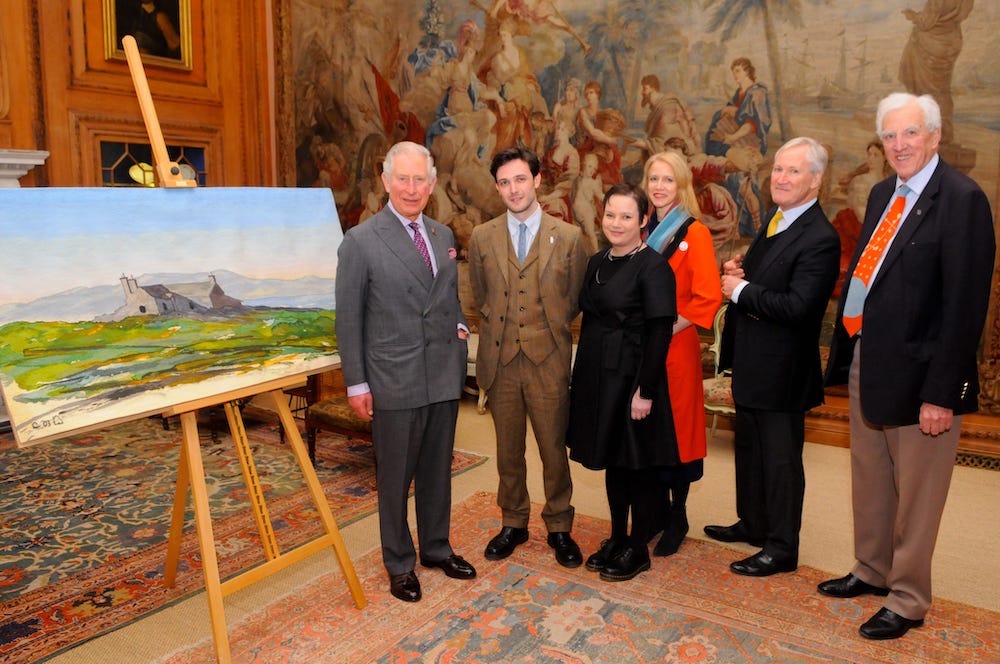 Edinburgh weaver Ben Hymers who works at Dovecot Studios, has created a tapestry depicting a watercolour by HRH The Prince of Wales.

The tapestry will now be hung at The Castle of Mey, formerly home to Queen Elizabeth The Queen Mother, and now a regular haunt for The Prince of Wales.

His Royal Highness had painted Abandoned Cottage on the Isle of Stroma, Caithness and Ben created a woven interpretation of the painting. Ben (29) worked for eight months to complete the complex interpretation after borrowing The Prince’s original watercolour from Clarence House in London.

He said: “I’m proud that I managed to stick it out. I was looking to represent a watercolour in wool, which was a challenge. You don’t want a slavish copy of the watercolour, as that’s like translating a novel through an online tool; you don’t capture the essence. Instead, I wanted to accurately show the techniques used by The Prince in a tapestry, to represent the idea of the layers of colour he used and the quick strokes he applied.

“The whole point of this piece of work is to showcase tapestry as a contemporary art form and to show that it still has impact. If, by being viewed by visitors to The Castle of Mey, it sparks someone’s imagination or encourages them to weave, that’s great.”

There are hundreds of colours in the tapestry and the tips of the chimneys are undyed natural wool from Welsh Lleyn sheep – a breed that The Prince keeps on his Highgrove Estate in Gloucestershire.

Ben is from Otley and studied History of Art at the University of Edinburgh followed by an apprenticeship at the Dovecot with master weaver Naomi Robertson.

She said: “I feel the sensitivity of The Prince’s watercolour has been retained in Ben’s work and that there is a real energy to the tapestry. For Ben, it’s been about finding a weaving solution to translating a painting into a woven cloth.

“When he began his apprenticeship, Ben had never before picked up a bobbin. He was starting from basics, and it was very rewarding for me to see how quickly he picked things up. After a while, I couldn’t stop him!

“His interpretation of The Prince’s watercolour is an amazing achievement and is a brilliant showcase of how far he has come in three years.”

The tapestry was presented to The Prince in the Tapestry Room at Dumfries House. This is the house that The Prince of Wales saved for the nation just over 12 years ago. The Palladian country house is now used for wedding ceremonies and is visited by 22,000 visitors each year.

Janet Casey, curator at Dumfries House, said: “The detail and vibrancy of this tapestry is testament to Ben’s skill and diligence in interpreting The Prince’s watercolour painting. It is fitting that visitors to The Castle of Mey will be able to admire the beauty of a traditional art form and the depiction of Caithness, an area close to The Prince’s heart.”

The long-term future of The Queen Elizabeth Castle of Mey Trust, which promotes the Caithness tourist attraction and employs its staff, was secured after plans were announced for The Prince’s Foundation to be named as its sole trustee.

Dumfries House is the headquarters of The Prince’s Foundation. The Prince Charles, Duke of Rothesay, used £20million of his charitable foundation’s money in 2007 to secure its future.

Now, the estate is used it to help people engage in learning experiences that promote confidence and personal development as well as offer training in real-life skills to open up future employment opportunities.