First the good news.  The Classic Thriller Theatre Company’s production of The Lady Vanishes has a stunning, atmospheric set and a faultlessly professional cast, all of whom play their roles with great energy.

This stage version of Alfred Hitchcock’s famous 1938 film fails for me, however, in that it never seems to know if it’s a comedy or a thriller. The ‘serious’ characters seem to be caricatures of themselves, while the comic turns are just not as funny as they probably were eighty years ago.

The action begins in an unidentified Eastern European country. An elderly governess, Miss Froy, is waiting for a train to take her back to England. Her fellow passengers include two cricket fanatics, an engineer/folk music obsessive, an adulterous couple, an Italian magician, a brain surgeon and Iris Henderson, an English girl going home to make a good marriage. While they are waiting for the delayed train, an accordionist plays a tune – one in which Miss Froy appears extraordinarily interested.

During the journey Iris sleeps, only to discover on waking that Miss Froy has disappeared, but that nobody on the train will admit she ever existed. Each traveller has his or her own reason for lying, and Iris – soon aided by the handsome musicologist Max – is determined to find out what is going on. It is no spoiler to reveal that in the end the pair of them solve the mystery, beat the baddies and find true love, and it is perhaps because the film plot is so well known that the play lacks tension and feels at times like a parody of itself.

In 1938 Europe was on the brink of war; in the opening scene the station is draped with swastikas, the villains click their heels and hail the Fuhrer, and even the initially flippant Iris asks her best friend Blanche to leave with her – ‘It isn’t safe here’. The dialogue is crammed with racism and the standard English attitude to foreigners who ‘should speak our language.’ Only Miss Froy and Max rise above this, the latter in particular being given some loaded lines – ‘I’m an engineer; I build bridges’, ‘We need allies’, and to the Nazi officer who complains about the music ‘You dare to call it a noise? It is the ancient music to which your people have celebrated for generations.’ Yet despite these portents of doom, Iris and Max run around the stage like rabbits on speed, while cricketers Charteris and Caldicott, upper-class idiots who (at least until the very last moment) would rather let a woman be kidnapped than miss the next Test Match, are played solely for laughs.

Juliet Mills is convincing as well bred spinster Miss Froy, Joe Reisig is suitably terrifying as the Nazi officer, and Robert Duncan and Ben Nealon are excellent, so far as the rather predictable script will allow them to be, as Charters and Caldicott. Lorna Fitzgerald’s Iris is spirited, but it is still hard to imagine that anyone would really behave as she does, morphing from air-headed heiress to courageous heroine in a matter of hours. Matt Barber’s Max is maybe a little too over-enthusiastic, but again it is perhaps the writing that constrains.

Natalie Law’s stewardess is very well played, her busy, purposeful walk and crisp matter-of-fact speech contrasting well with the rather dithery High Court judge, Todhunter, and his fed up would-be lover, Margaret. Philip Lowrie conveys Todhunter’s double standards and moral failings well – here is a man who is supposed to uphold what he would no doubt call ‘the British way of life’, but is prepared not only to cheat on his wife but also to deny ever having seen the missing Miss Froy, simply to avoid getting his name in the papers. The only problem with this is that Todhunter comes across as such a weed that one struggles to understand why Margaret wanted to run away with him in the first place. She might well have had a better time ‘in a boarding house in Margate’ (her alibi). The fatal result of Todhunter’s insistence that a dignified surrender will save his skin is a clear allusion to the 1938 Munich Agreement; sadly neither bring ‘peace in our time.’

The star of this production of The Lady Vanishes is undoubtedly its set. Morgan Large deserves high praise for his outstanding design, which takes us inside a traditional train terminus, all wrought iron arches, echoey spaces and Brief Encounter style buffets, then into the train itself, cleverly created by simply closing two panels, the forestage becoming both the corridor and the dining car, the movement of the train indicated by Lighting Designer Charlie Morgan Jones’ flickering lights behind the carriage windows.

The matinee performance I attended was packed, the audience so enthusiastic that some people clapped at every joke, and many commented on the authenticity of the stage design – so if you’re looking for a couple of hours of escapist mini-thrills, reasonably amusing jokes and well-polished acting, go and see The Lady Vanishes. It’s at the King’s Theatre until Saturday. 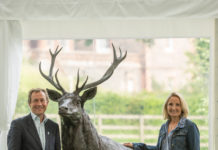