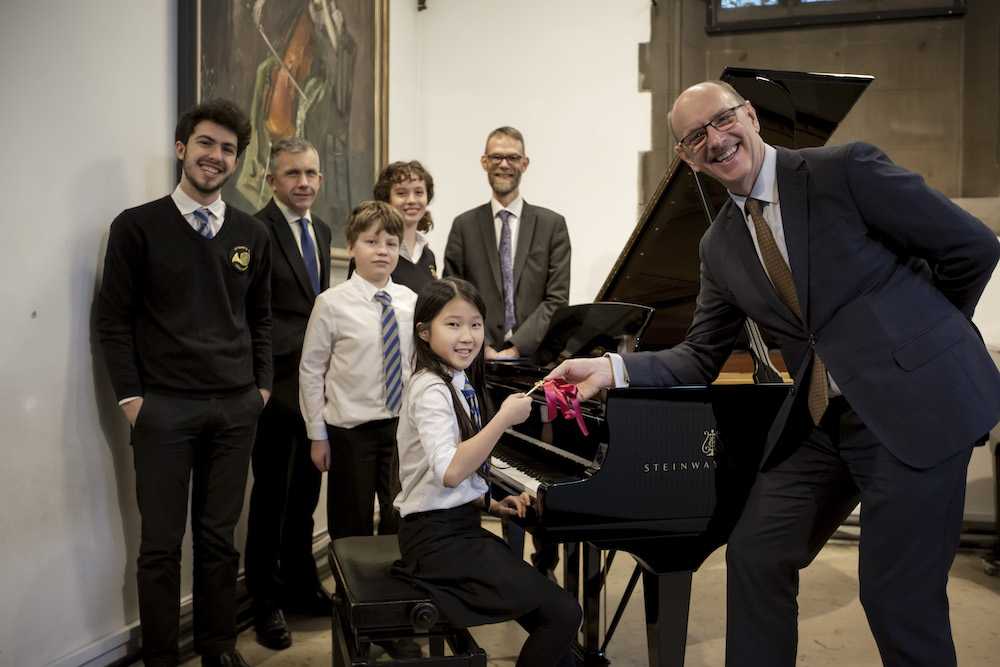 A very special gift from Germany has arrived for use by young musicians at St Mary’s. Following a fundraising campaign by one of the school’s directors Kat Heathcote and her husband Iain Macneil, there is now a brand new Steinway Grand Piano leading its fleet of instruments.

As Trustees of Witherby Publishing Group Charitable Trust, the couple held a fundraising event on board the Royal Yacht Britannia in September. The evening featured performances by some of the school’s pupils and Kat and Iain match-funded a giving campaign with support from a range of donors.

The £100,000 target for a new instrument was surpassed, with the additional donations raised to be distributed through a Bursary Fund. Steinway Director Keith Glazebrook personally oversaw the delivery of the piano, made at the Steinway factory in Hamburg, Germany to St Mary’s Music School.

Dr Kenneth Taylor, Headteacher, said: “It was a marvellous experience for representatives from the School to go to the Steinway Factory in Hamburg and try out a number of instruments in the showroom before choosing the model that can withstand the wide use by a School where music is the focus. Everyone is thrilled with such a generous gift and our piano pupils cannot wait to play it.”

As one of nine Access to Excellence Music and Dance schools across the UK, and the only one in Scotland, St Mary’s receives vital bursary funding from The Scottish Government, but must make its own investment in instruments. This is the first new flagship grand piano purchased since 1985, also with philanthropic support.

Many of the school’s pianos were either purchased through individual donations or gifted by a wide range of benefactors.

Kat Heathcote commented: “St Mary’s Music School is all about access to excellence and investment in the talent of our pupils. When we heard about the need the School had for a better piano, we felt strongly that this was something that the WPG Charitable Trust wanted to support”.

Over its 35 years in service, over 600 pupils have performed either on, or alongside the old piano that will be replaced, in concert and masterclasses. There have been countless performances using the piano by visiting artists and exceptional teachers over the years. It will now be reconditioned and continue to play an active role.