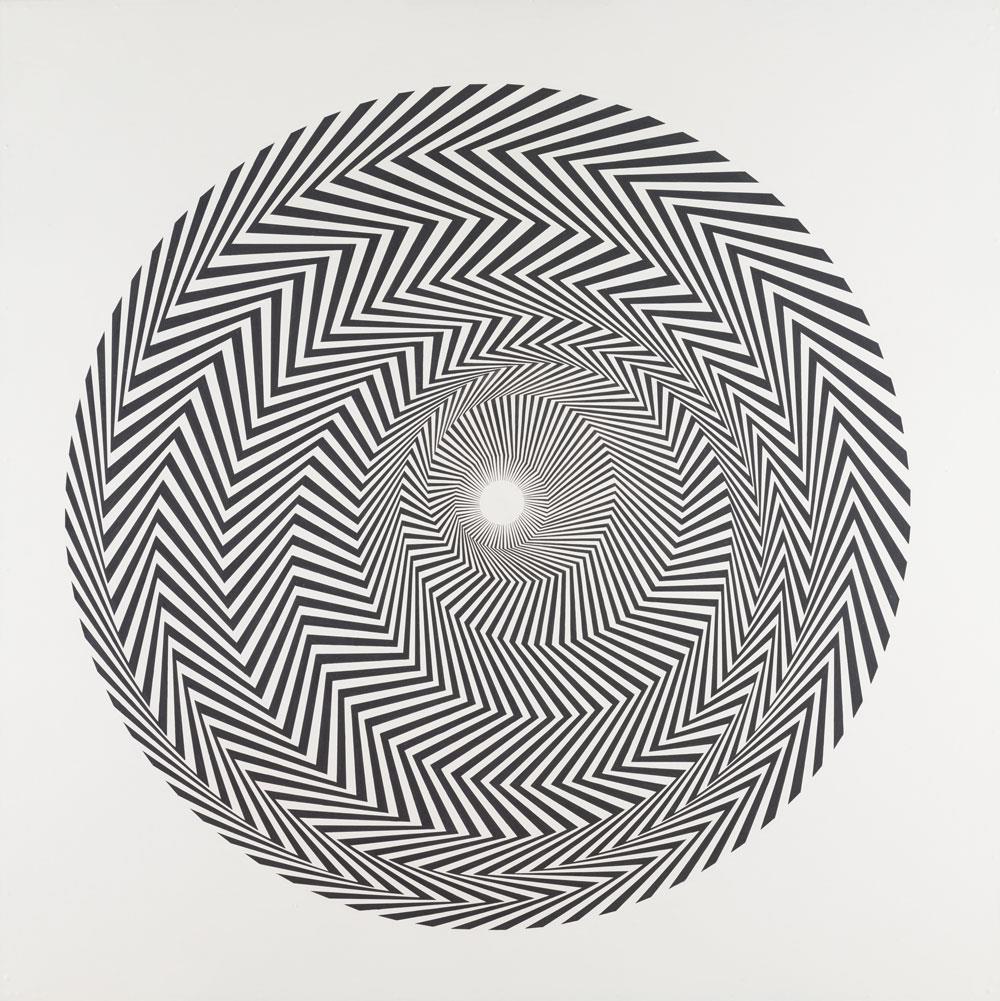 The National Galleries of Scotland (NGS) has announced a dynamic line-up of exhibitions for 2019.

From the dazzling abstraction of Bridget Riley to the political art of Paula Rego; from world-renowned photographers Francesca Woodman, Diane Arbus and Robert Mapplethorpe to the wide-ranging creativity of Cut and Paste: 400 Years of Collage, the galleries hope their 2019 Programme will energise, inspire and encourage all of us to look at the world a little differently.

The major Festival exhibition in summer 2019 celebrates the work of one of the greatest British painters of our time. Bridget Riley is the first major survey of the artist’s work to be held in the UK for 16 years, and the first of its scale to be staged in Scotland.

Over the course of a remarkable career, which has spanned seven decades, Bridget Riley (b.1931) has developed a unique visual language, creating compelling abstract paintings which explore the fundamental nature of perception.  Through her observations of the natural world, her experience of looking at the work of other artists, and through her own experimentation, Riley has made a deep, personal investigation into the act of painting, and of how we see.

At its heart, her work explores the ways in which we learn through looking, using a purely abstract language of simple shapes, forms and colour to create sensations of light, space, volume, rhythm and movement.

Highlights include early paintings inspired by the work of Georges Seurat, such as Pink Landscape (1960); Riley’s first abstract paintings, Kiss and Movement in Squares (both 1961); and other iconic works, including Current (1964), from the collection of the Museum of Modern Art in New York and Paean (1973) from Tokyo’s Museum of Modern Art. The exhibition also includes Late Morning (1967-8) and Rise 1 (1968), key, large-scale colour paintings first shown at the 1968 Venice Biennale, where Riley became the first British contemporary painter and the first woman artist to be awarded the International Prize for painting. The exhibition will trace developments throughout Riley’s career, right up to her latest works, including a selection from her recent series of disc paintings, entitled Measure for Measure (2016-18).

Occupying the whole of the Scottish National Gallery of Modern Art (Modern Two) during the summer, Cut and Paste: 400 Years of Collage is, remarkably, the first survey exhibition of collage ever to take place anywhere in the world. Collage is often described as a twentieth-century invention, but this show spans a period of more than 400 years and includes more than 250 works.

A huge range of styles, techniques and approaches is on show, from sixteenth-century anatomical ‘flap prints’, to computer-based images; work by amateur, professional and unknown artists; collages by children and revolutionary cubist masterpieces by Pablo Picasso and Juan Gris; from nineteenth century do-it-yourself collage kits to collage films of the 1960s. Highlights include a three-metre-long folding collage screen, purportedly made in part by Charles Dickens; a major group of Dada and Surrealist collages, by artists such as Kurt Schwitters, Joan Miró, Hannah Höch and Max Ernst; and major postwar works by Robert Rauschenberg, Louise Nevelson, Andy Warhol and Peter Blake, including source material for the cover of the Beatles’ album Sergeant Pepper’s Lonely Hearts Club Band.

The importance of collage as a form of protest in the 1960s and ’70s will be shown in the work of feminist artists such as Carollee Schneemann, Linder and Hannah Wilke; Punk artists, such as Jamie Reid, whose original collages for the Sex Pistols album and posters will feature; and the famously subversive collages of Monty Python founder Terry Gilliam.

The exhibition also features the legendary library book covers which the playwright Joe Orton and his lover Kenneth Halliwell doctored with collages, and put back on Islington Library’s shelves – a move which landed them in prison for six months. In addition, the exhibition also demonstrates how collage remains important for the practice of many artists working today. Owing to the fragility of much of the work, the exhibition will not tour: it can only be seen at the SNGMA in Edinburgh.

Highlighting the richness of the ARTIST ROOMS photography collection, which is jointly owned by NGS and Tate, ARTIST ROOMS: Woodman, Arbus and Mapplethorpe celebrates the work of three of the twentieth century’s most influential photographers. Taking place at the Scottish National Portrait Gallery over the summer, the exhibition includes around 40 works. With a particular focus on self-portraiture and representation, the show explores the connections and similarities between these three Americans, each of whom produced bodies of work that were revolutionary, ground-breaking and at times controversial.

Francesca Woodman began exploring self-identity through photography at thirteen years old and continued to experiment and develop her practice in the following decade, until her tragically early death in 1981. Her photographs speak to her agency in being both the subject and creator of the work.

Drawing from the significant holding of Diane Arbus within ARTIST ROOMS, the exhibition will include the limited-edition portfolio, A Box of Ten Photographs (1969-1971), which was selected by Arbus herself and as such, can be seen as representing her creative expression and how she wished to be seen as a photographer. Finally a series of portraits of Robert Mapplethorpe explores the photographer’s varying personas, as expressed for the camera, and poignantly document his declining health as a result of having contracted AIDS. The exhibition will occur during the thirty-year anniversary of his death.

From 2019 to early 2020 the Scottish National Portrait Gallery shows off highlights from an unparalleled collection of Scottish photography recently acquired jointly by the NGS and the National Library of Scotland.

Amassed by collector Murray MacKinnon, The MacKinnon Collection documents Scottish life and identity from the 1840s through to the 1940s and includes photographs by William Henry Fox Talbot, David Octavius Hill and Robert Adamson, Julia Margaret Cameron, Thomas Annan, Roger Fenton, George Washington Wilson, and others. The MacKinnon Collection is distinguished by the work of photographers who captured unprecedented images that brilliantly transport us back to a century of changing rural communities, growing cities and enduring historic sites, but also illuminate the faces and places that continue to affect our lives today.

Paula Rego is an ambitious retrospective of the Portuguese artist’s work that brings politics to the fore. Spanning Rego’s career from the 1950s through to 2012, the works in this exhibition address António de Oliveira Salazar’s fascist regime, the 1997 referendum on legalising abortion in Portugal, the invasion of Iraq in 2003 by the United States and its allies and, from 2009, female genital mutilation – all of which resonate strongly with contemporary feminist and political issues. Highlights of the exhibition include Dog Woman (1952), Snow White and her Stepmother (1995), The First Mass in Brazil (1993) and Joseph’s Dream (1990).  Curated by independent curator Catherine Lampert and organised by MK Gallery (Milton Keynes), and the Irish Museum of Modern Art, Dublin, the exhibition includes over 60 loans.

NOW is the Scottish National Gallery of Modern Art’s dynamic three-year series of contemporary art exhibitions. The fifth instalment in the series will be centred on a major survey of work by Anya Gallaccio. The Paisley-born artist, who was nominated for the Turner Prize in 2003 and was a prominent figure in the Young British Artists generation, is renowned for her spectacular installations and sculptures. Using all kinds of organic materials, including trees, flowers, candles, sand and ice, she creates temporary works that change over time as they are subjected to natural processes of transformation and decay. Gallaccio also makes more permanent artworks in bronze, ceramics, stainless steel and stone that attempt to capture or arrest these processes. Exploring themes of change, growth and decay, some of the other artists appearing in NOW are Turner Prize nominee Roger Hiorns, the French artist Aurélien Froment and Scottish artist Charles Avery.

Currently the the fourth instalment of the SNGMA’s NOW programme trains a spotlight on the playful, thought-provoking work of Monster Chetwynd (b.1973), Henry Coombs (b. 1977), Moyna Flannigan (b. 1963), Betye Saar (b.1926) and Wael Shawky (b.1971). This exhibition runs till 28 April 2019 at the Scottish National Gallery of Modern Art.

Director-General of the National Galleries of Scotland Sir John Leighton says he is excited to welcome visitors to this dynamic, daring programme of exhibitions.

He said : “For 2019, we’ve put together a programme of exhibitions that encourages us all think more deeply about the world around us. From Bridget Riley’s work which makes us examine the very way our eyes process images, to Paula Rego who challenges us to look more closely at issues and situations we might rather turn away from.

“Works from Francesca Woodman, Diane Arbus and Robert Mapplethorpe, as well as the stunning MacKinnon collection show us the extraordinary capacity of photographs to capture life and convey meaning. The final two installments of NOW will allow us to continue to explore the outstanding work being made by both Scottish and international artists today and Cut and Paste: 400 Years of Collage will give us an insight into collage as both hobby and high art. I look forward to welcoming you all to the National Galleries of Scotland in 2019.”