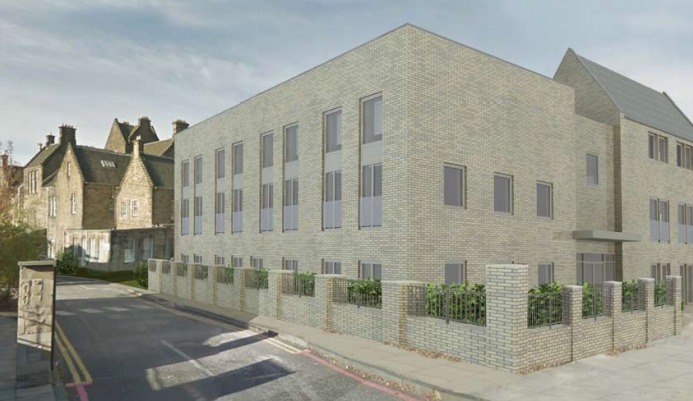 The former social work centre Springwell House will be converted to 39 apartments with seven town houses in extension. But no affordable homes will form part of the scheme.

Claims have been made that the council is being “held hostage” over a lack of affordable housing.

Developers, AMA New Town Ltd, will not provide any affordable home as part of the scheme or any funding for the council to build any social housing, due to “exceptional circumstances”.

The premises have remained empty since 2013 and were most recently used as a council and NHS social work and health centre. The flats will be formed within Springwell House, an existing listed villa building and a new modern extension.

Officers told the council’s development management sub-committee that in a best case scenario, ‘only a three per cent profit would be achieved on the site as a whole’ if affordable housing was included – which would ‘render the scheme financially unviable’.

Planning convener, Cllr Neil Gardiner, said it was “quite remarkable” that no affordable housing provision was being provided as fellow councillors concluded that the problem of viability was due to the poor condition of the listed buildings.

Cllr Gardiner added: “It looks like we are being held hostage to the threat to the listed buildings.”

Council policy dictates that 25 per cent of the units should be affordable homes. Cllr Chas Booth urged that the plans be rejected in order to send a message to developers that affordable housing provision should be taken seriously.

He said: “Why is it for us to accept them paying too much money for the site and the seller not maintaining the buildings?
“There’s a desperate need for affordable housing. We have a policy there and a choice whether that policy means something. For the sake of the many people who are in desperate need for a flat that they can afford, we must reject this application.”

Later Cllr Booth and his fellow Green councillor Alex Staniforth explained how they felt about this:

Green councillors @CllrChasBooth and @Alex4Craig_Dudd express their dismay at developments being given the green light without affordable housing. Strengthened policy and a commitment to sticking to it are needed. pic.twitter.com/XTCFvYqiwc

But Conservative councillor John McLellan labelled the view that the council had been backed into a corner over the threat to listed buildings as ‘over-simplification’ and a ‘cartoon-like approach’.
He added: “It’s not the developer’s fault that the council and NHS has allowed these buildings to deteriorate.”
In justifying no affordable housing, planning officers said the plans would ‘safeguard the retention of two important listed buildings which are currently vacant and deteriorating, and which contribute to the historical character of the local area’.
Fellow Tory Joanna Mowat also urged the plans to be approved or the listed buildings would be sacrificed for affordable housing.

Cllr George Gordon (SNP) lambasted the proposals, believing they were “poorly thought out” and added that ‘the amenity space is appalling’.
Cllr Gardiner, who called for the plans to be turned down, said: “I’m going to move that we reject this application because it doesn’t include affordable housing. I think they could come back with a better scheme that keeps the listed building and looks at affordable housing.”
Vice-Convener, Cllr Maureen Child, backed the proposals for approval but acknowledged that affordable housing is ‘extremely important’.
She added: “The important thing is to retain these buildings for use that haven’t had a use for a number of years.”
Ward Cllr Denis Dixon, said he was torn as to whether to back the plans and thought the developers could ‘come up with a better design solution that would complement the area better’.
He added: “It’s very desirable to have social housing on this site.”
Councillors voted six to five in favour of approving the plans.