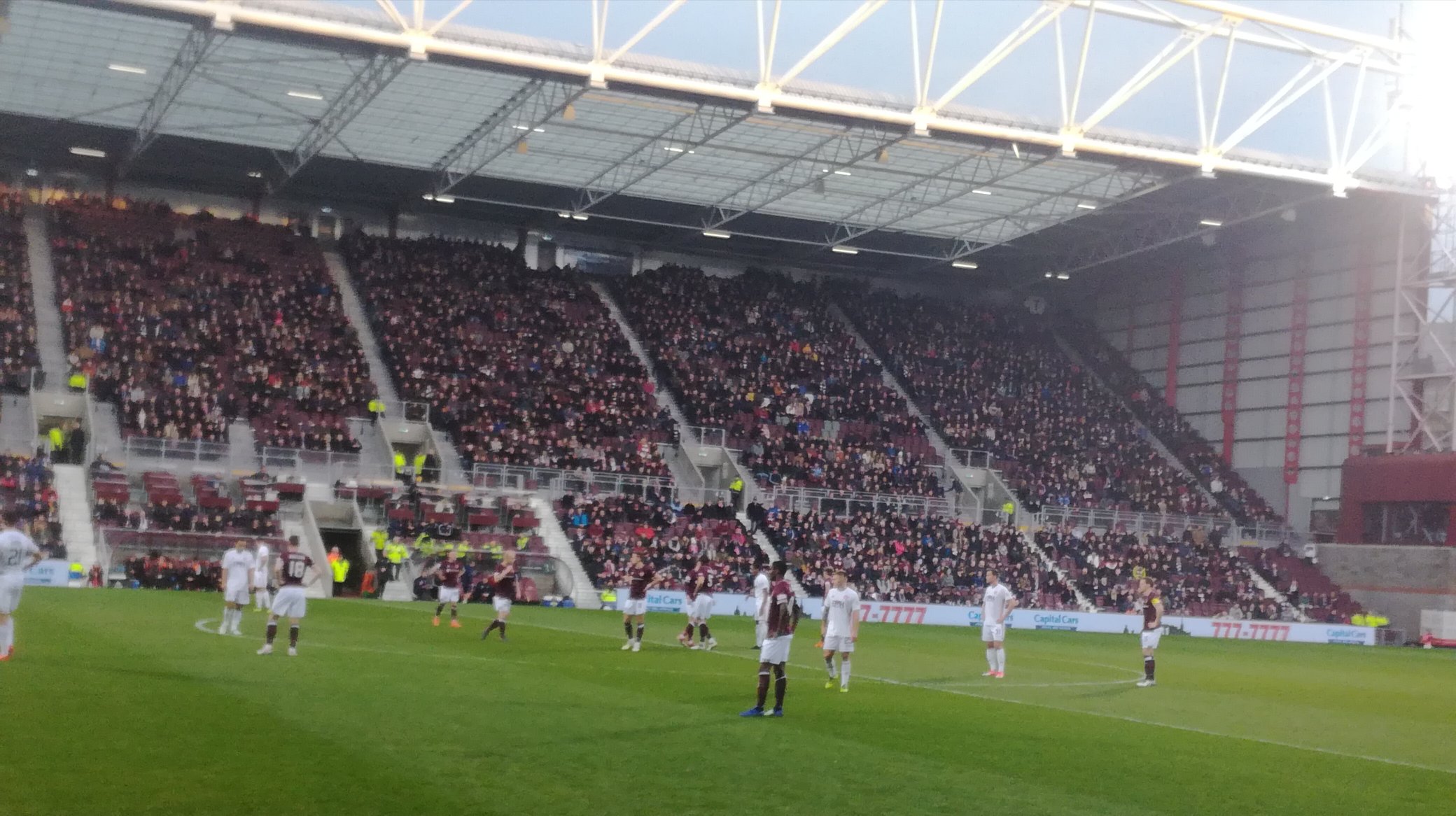 Hearts got back to winning ways at Tynecastle Park on Boxing Day as they comfortably saw off a struggling Hamilton Academical side to secure an important three points in the Ladbrokes Premiership. Two goals in the opening half from Steven Naismith and Arnaud Djoum were enough for victory on a lacklustre afternoon in Gorgie.

Hearts manager Craig Levein made three changes from the team that went down in Aberdeen at the weekend. There was a welcome return for Arnaud Djoum from suspension while Ben Garrucio and Callumn Morrison also returned, the suspended Demetri Mitchell missing out along with Sean Clare and Oliver Bozanic who dropped to the substitutes’ bench.

There was a muted atmosphere around Tynecastle as the game kicked off – it certainly didn’t have a Boxing Day feel to it. That said, the crowd were almost on their feet in the opening minute when Olly Lee let fly from 25 yards, but his shot was too direct at Accies keeper Woods to threaten a goal.

There was an even better chance for Hearts a couple of minutes later when fine play down the right from Callumn Morrison saw the winger deliver a dangerous cross which found Steven Naismith, but the striker inexplicably headed wide when it seemed easier to score.

Hearts were dominating the game and it was no surprise when they went ahead in the 18th minute. Fine play from Ben Garrucio found Naismith inside the Accies penalty box. The on-loan Norwich striker turned and placed his shot beyond keeper Woods into the net.

Hearts almost doubled their lead just after the half-hour mark when a quick free-kick from Naismith set Steven MacLean clean through on the Accies goal but his shot was too high, and the ball sailed into the Roseburn Stand.

On the stroke of half-time Hearts did double their lead. Again, it was Steven Naismith who was the instigator refusing to give up on a loose pass. He fed Morrison whose cross found Arnaud Djoum who took a touch inside the penalty box before driving the ball home.

Hearts continued to create chances in the second half but couldn’t add to their lead. The main culprit was Michael Smith. The Northern Irish international fired a great chance from 10 yards high into the Gorgie Stand while he spurned an even greater opportunity 13 minutes from the end when Hearts were awarded a penalty kick after Gordon handled the ball inside the visitor’s penalty box. It looked a harsh decision and perhaps justice was done when Smith crashed his penalty kick against the bar and the ball was cleared.

By this time Accies were reduced to ten men when Want received his second yellow card after he tugged Naismith’s shirt with 20 minutes left.

Hearts may also have seen a reduction in numbers when Ben Garuccio lunged in on an Accies player, but referee Don Robertson deemed only a yellow card was necessary – a decision which left the Hearts man mightily relieved.

The final action of the afternoon came when Olly Lee unleashed a ferocious shot from 30 yards which produced a fine save from Woods who pushed the effort over the crossbar.

Hearts will be happy with the win, but their team are clearly shorn of the confidence that typified their early season play.

Craig Levein could also sense the lack of confidence in his side. He told the official Hearts website after the game:

“I thought it was a decent performance. We didn’t get the icing on the cake, but the cake was pretty good.

“I thought we played good stuff last week without an end product. Today we had end product and loads of chances, but you could still see the nerves in the team.

“We missed chances early on and squandered some situations with poor decision making.

“It’s nice to go into the derby with a win. This has been a tough slog through this period, and we haven’t always played poorly, but it’s about character and determination and grit and resilience and all these things people talk about.

“I’m hoping today’s efforts make the players and supporters feel good about the game on Saturday.”

Top man: It has to be Steven Naismith. Hearing the wee man bawl to his teammates ‘f****ng get there first’ was one of the highlights of my afternoon