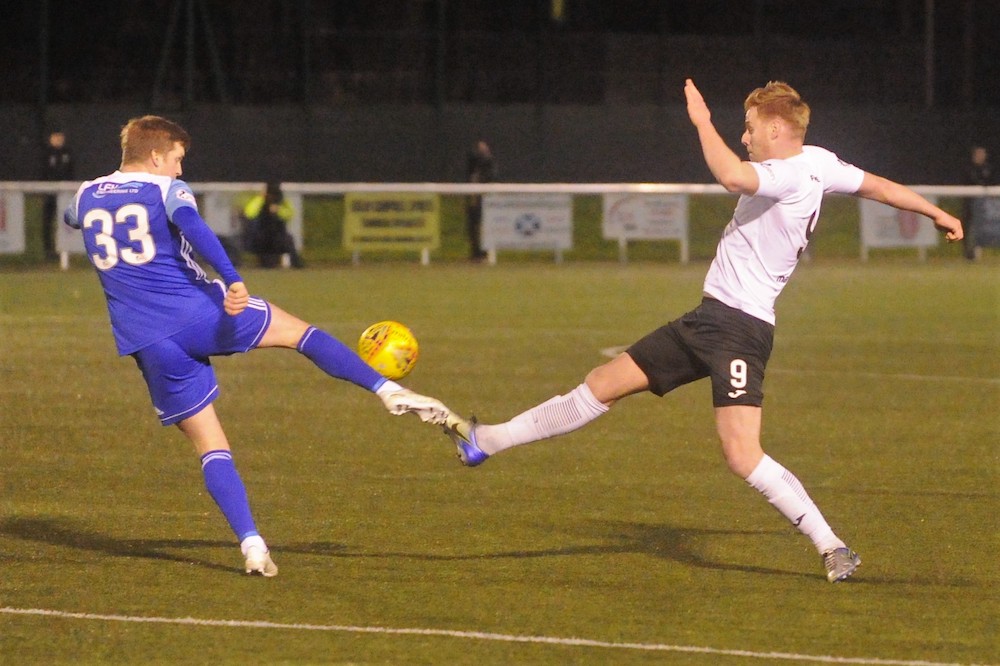 There was to be no change at the top of the Ladbrokes League 2 on Tuesday night as Edinburgh City and Peterhead shared the spoils  in a 1-1 draw in front of over 450 fans who braved the cold at Ainslie Park.

Jason Brown opened for the visitors before Liam Henderson equalised shortly after. City spent the final 10 minutes a man down after Andy Black saw Red after a second yellow.

With The Blue Toon enjoying a seven point gap over third place Clyde, a win following the 450-mile midweek round trip would have seen Peterhead leapfrog City to top the table however a dogged display by James McDonaugh’s side ensured the status quo remained, in a match that only really came to life after the interval.

The opening forty five minutes were largely spent with the ball in the air and neither keeper being forced into any notable action in a half that was as much for the purists as it was for an excuse to nip off for an early cheeky chicken curry pie.

Following the half time oranges and undoubtedly a couple of encouraging exchanges in the respective changing rooms, the teams came back out looking for an opening that they hoped would be the catalyst to go on and win the game.

A few niggling fouls littered the early stages of the second half and Andy Black picked up what turned out to be a costly caution as he joined Graham Taylor in the ref’s notebook in the 56th minute.

Cometh the hour and the hardy bunch of Blue Toon followers had reason to celebrate when Jason Brown nipped in front Calum Antell between the City sticks to fire home from close range.

That lead was to be short lived however and just nine minutes later, the home support were on their feet as Liam Henderson came up trumps to guide the ball beyond Greg Fleming to set up a tense final quarter of an hour at the home of The Spartans FC.

With both sides pressing for the winner, City’s task was made trickier when Andy Black got first dibs on the showers when he was shown a second yellow by Referee Steven Reid.  The decision appeared to take a while to be arrived at by the whistler who invited the player back in for a chat after play had been allowed to rage on. City went on the offensive and there was a tumble by Scott Shepherd at the edge of the box following a coming together with William Gibson.  Shepherd wasn’t however in a position to pull the wool over Referee Reid’s eyes and the man in the middle brandished a yellow for simulation.

One final discussion point came before the final shrill of the whistle, when the ball appeared to hit the arm of a Peterhead defender on the edge of his own penalty box but those appeals were waved aside and the teams were left to rue missed chances and contemplate the ‘what-ifs’ as they trotted up the tunnel with a point apiece for their troubles at the end of a intriguing encounter.