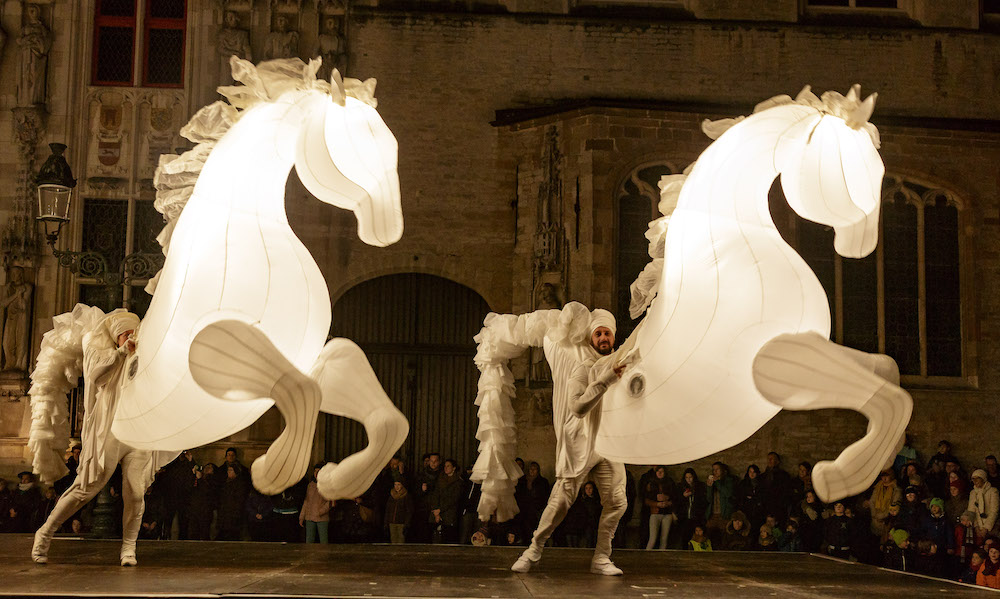 This year’s Street Party hosted by Johnnie Walker is set to be a spectacular love-in. From the moment the doors open at 7.30pm, till long after the midnight bells have fallen silent, bands and DJs, street artists, aerialists, musicians and dancers from Scotland and mainland Europe will all collaborate to make it the party of a lifetime.

A celebration of Scotland’s cultural ties with Europe which go deep into the past and will continue into the future, everything about this year’s Street Party shouts a loud and proud message from Scotland to Europe – We Love You! From three giant grannies providing a Scottish, Spanish and Eastern European welcome, Compagnie des Quidams riding four horsemen of the apocalypse down Princes Street, to Edinburgh’s All or Nothing Aerial Dance Company teaming up with the fabulous French Compagnie Transe Express to bring us all together for the world’s most inclusive and fantastically fabulous New Year’s Party with a unique new collaborative performance, guaranteed to astound.

A warm welcome greets party goers through the doors with pipes and drums, traditional Scottish country dancing, the giant granny puppets by Vision Mechanics and the Hogmanay Hosts for the evening Edinburgh’s own and Love Island’s Aftersun DJs The Mac Twins to kick the action off from the very first moment.

World music is at the heart of the Street Party and Edinburgh’s Hogmanay 19 brings some of the hottest acts of 2018 to new year fun seekers across three stages. From the home-grown new phenomenon that is Gerry Cinnamon to the classic Ibiza sounds of Judge Jules and Snap!, there’s a whole continent of good times happening out on the street.

Headlining the Waverley Stage, Gerry Cinnamon tops off a whirlwind year of festival appearances and sell-out shows having blasted onto the scene as one of the best live acts in the UK. Also playing the Waverley Stage are the Edinburgh band with an Vistas and Snap!the German Eurodance outfit whose hits The Power and Rhythm is a Dancer have filled dancefloors since the word “Discotheque” was almost considered new.

Announced today is the appearance of the fiery flame-haired new vixen of dark pop Stephanie Cheape. After blowing away a panel of judges to take the hotly contested Capital FM Best Unsigned Act at the end of 2017, she’s had a monster year tearing it up at festivals including TRNSMT, Belladrum and Party At The Palace, headlining the legendary King Tut’s in Glasgow and supporting the likes of Bryan Ferry in front of thousands at Glasgow’s iconic Kelvingrove Bandstand where the Roxy Music legend said on stage he was blown away by her performance. Catch this force of nature opening the Waverley Stage.

Taking to the St Andrew Square Stage is Elephant Sessions, the indie folk foursome from the Highlands who lifted BBC Scotland’s Trad Music Album of the Year in 2017 and Live Act of the Year 2018 at the Scots Trad Music Awards. Acclaimed Edinburgh band Miracle Glass Company brings its vibrant, psychedelic rock ‘n’ roll and Hamburg based Meute will wow the party-goers with its one-of-a-kind, live drum and brass arrangements of well-known techno and house numbers.

Headlining the Johnnie Walker Stage on Castle Street is the superstar DJ Judge Jules making his Edinburgh’s Hogmanay debut, taking the audiences up to the Midnight Moment. Local powerhouse Trendy Wendy kicks off proceedings with her trademark 21 Century disco and the Mac Twins are set to make sure the party turns up a notch after midnight, taking dancers through to 1am.

Whether your taste is indie or Europop, the Silent Disco has a playlist for you. Don your headphones on Market Street, choose your channel and get ready to learn some groovy new moves this Hogmanay.

Last year, the festival asked up-and-coming Scottish band Niteworks to compose the soundtrack for the Midnight Moment fireworks. Continuing this theme and in keeping with this year’s celebration of Europe, Edinburgh’s Hogmanay has commissioned a soundtrack to the fireworks from German band, Meute, who will also perform on the St Andrew Square Stage. Meute is working with the Novello award-winning composer and sound designer Dan Jones, who will also sound design the Street Party arena. The soundtrack has been recorded by the Macedonian Symphonic Orchestra.

But there is also more to the Street Party than great live bands. Scotland shows Europe and the world what it is made of when Louise Marshall concludes another spectacular year of piping around the world by bringing her all female Divas and District Pipes and Drums to Scotland’s leading new year celebration. Last year’s surprise singing sensations Got Soul Choir get everyone singing with its 140 strong choir bringing together members from Dundee, Glasgow, Dunfermline, Kirkcaldy and Edinburgh. PyroCeltica is set to dazzle with spectacular show of fire theatre portraying Celtic myths and folklore, and Prison Break Rockerz, Belgium’s most talented breakdancing troupe, will wow revellers with their energetic and skilful choreography.

Stunning colourful puppets Big Dancers from Spanish-based El Carromato will dance on stages along the street to entertain party goers. The spectacular site of giant illuminated horses, trotting down the Mound is thanks to the French Compagnie Des Quidams whose choreographed beautiful Fiers a Cheval, will grace the Street Party before disappearing into the night to re-emerge seeming to float high on the buildings.

As the evening progresses performers move across the streets and climb up to animate the buildings and into the night sky as the clock inches closer to midnight.

For over 25 years Compagnie Transe Express, the world-leading street and aerial performers have created spectacular aerial shows all over the world. Their striking, colourful and massive opera singers will roll along Princes Street in bulbous skirts singing famous classical arias to the accompaniment of crazy wild funked up drummers. Their anarchic drummers will get everyone dancing before taking to the skies suspended 25 metres above the street, banging out their fiesta beats.

Love is in the air, literally as All or Nothing Aerial Dance Company create romantic aerial interludes along the balconies of Princes Street, and keeping our heads lifted high, illuminated stilt-walking creations from Dutch theatre company Close Act will glide high above the party goers as street and skies are animated with the world’s finest acts during the world’s best Street Party!

With an as yet unconfirmed level of irony Europe’s “Final Countdown” takes us into the last moments of 2018.

The Concert in the Gardens is one of the best spots in the world to enjoy Hogmanay and the midnight moment with incredible views of the fireworks launching from Edinburgh Castle. In a very special rendition of Auld Lang Syne, Franz Ferdinand take us through midnight and into 2019 where the party continues through to 1am finishing with a sweep of Pipers to send folk on their way home to prepare for the Loony Dook. On the main stage in the gardens, Franz Ferdinand is supported by Metronomy and Free Love.

Street Party ticket holders will be given the option of making a donation when purchasing a ticket to raise money for Brain Tumour Charity, an organisation Underbelly raises money for year-round, and for which it raised over £30,000 this summer. Brain tumours are the biggest cancer killer for children and adults under 40 and increased funding for research is desperately needed. Around 500 children and young people in the UK are diagnosed each year but diagnosis times of childhood brain tumours are longer in the UK than in many other countries. The Brain Tumour Charity’s HeadSmart campaign aims to reduce brain tumour and brain cancer diagnosis times to four weeks or less.

Special FREE trams (till 5am) and a local bus service by Lothian Buses at £4.50 (in advance and £5.00 on the night) is available till 4.30am to take people home safely after the event. Thank you to Official Transport Providers Edinburgh Trams, in association with City of Edinburgh Council.

Charlie Wood and Ed Bartlam, directors of Underbelly who produce Edinburgh’s Hogmanay on behalf of City of Edinburgh Council said: “We set out to put Edinburgh’s Hogmanay in the front rank of new year celebrations so we’re tickled pink to see this world class celebration come together. We’re saying goodbye to 2018 and a big hello to 2019, which we celebrate with an explosion of talent from across Europe and say “We Love You”. In the words of our friends Snap!, “You can feel it everywhere / Lift your hands and voices / Free your mind and join us”.

“Kicking off the festivities, the Torchlight Procession will this year create a spectacular outline of Scotland using hundreds of flaming torches – symbolising Edinburgh and the nation’s place in the world as we blaze a trail towards 2019.”

“On New Year’s Eve, Franz Ferdinand will headline the world-famous Concert in the Gardens, while a packed programme of live pop, rock, and ceilidh will entertain the Street Party as acrobats liven up the skies above.

“Meanwhile, we’ll welcome the return of the popular Bairns Afore concert and Message from the Skies, and of course the much-loved Loony Dook in the Firth of Forth – the iciest dip you’ll ever have but the best way to blow away the cobwebs! Don’t miss it.”

The Street Party hosted by Johnnie Walker comes hot the heels of the iconic Torchlight Procession on the 30th December and ahead ofThe Loony Dook and Message from the Skies on New Year’s Day, which runs through to Burns Night in a unique cross artform collaboration with ten of Scotland’s best artists, designers and musicians, six Scottish or Scotland based writers will pen a love letter to Europe which will be projected on to buildings across the city.