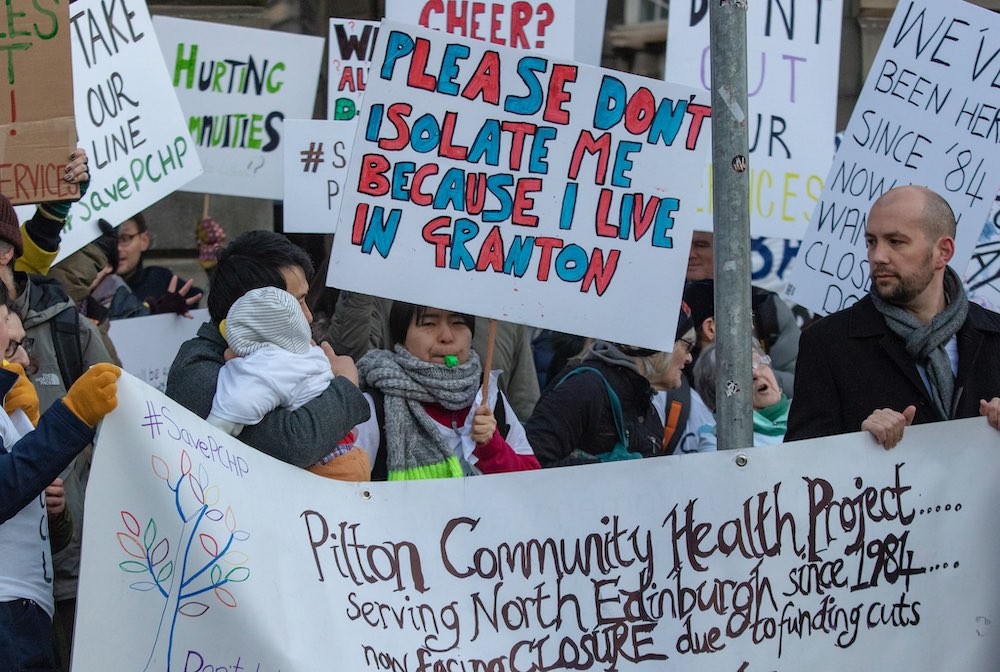 Following the decision of the Integration Joint Board (IJB) last Friday to cut funding for certain health related projects in the city, one of those, the Pilton Community Health Project held a meeting at Muirhouse Millennium Centre on Monday evening. It was attended by local politicians including the Deputy Council Leader Cllr Cammy Day who represents Forth Ward and fellow Labour councillor Gordon Munro and Ben Macpherson MSP.

The Deputy Council Leader and Cllr Gordon Munro have now sent a letter to Ben Macpherson in his capacity both as local MSP and Minister for Europe, Migration and International Development,  asking that he helps councillors by raising the matter with Health and Sport Secretary Jeane Freeman and in the Cabinet.

The two Edinburgh councillors ask Mr Macpherson to assist them in making representations about perhaps using the government’s  ‘record underspend’ to fund bodies rejected by the IJB last Friday. They also ask that any monies from the Health Budget which have come from the extra Barnett formula calculation could be used in this way, and go on to ask Mr Macpherson to speak to the Finance Secretary and others about full and proper funding for the city council.

Cllr Cammy Day said : “We are asking the Minister to make representations at Cabinet level. Mr Macpherson made a commitment at the public meeting on Monday that he wanted to work with us in any way he could. He had already raised it with the Health Secretary Jeane Freeman, and now we are asking him to escalate his representations to government.

“He didn’t commit to doing it at the meeting but we are now asking  him to recognise that the situation is critical and urgent and ask him to speak to the Finance Secretary. We would like him to speak to Derek Mackay about the underspend and the funding for Edinburgh Council and Lothian Health Board.

“The letter clearly states our position that we would like to work with Ben Macpherson and asks him to raise it with the Finance Secretary.”

Deputy Council Leader Cammy Day represents Forth Ward in the north of the city and as such he made a deputation to the IJB last Friday about the proposed cuts which may spell the end of the Pilton Community Health Project which employs 35 people and involves 40 volunteers.  He pointed out to us that he was the only local politician who turned up to the meeting.

He explained what happened last Friday : “The decision was made with an amendment from Cllr Henderson that they would look to try and mitigate the impact on service users where possible and that the management team and officers would work with the projects affected – particularly those which might be threatened with closure. They would look at any alternatives, so that means it is the health board, the sector and all the funders who need to do that.

“Nobody is saying that the services delivered are not required. It is just that the funding application in among the £10 million pot of applications for a fund of £4 million meant that some were not deemed as good as others.

“The IJB and the council will have to find a way of providing the services.”

I put it to the Deputy Leader that everyone knows that the council is about to overspend on its health and social care budget by around £10 million, and perhaps this is one way that the IJB can alert services who might manage to find funding somewhere else.

Cllr Day replied : “With the continued erosion of public funding, (particularly today when I will be discussing the additional £10 million of cuts that the Scottish Government’s draft budget will deliver for Edinburgh just this afternoon), I cannot pretend that we don’t have some really difficult times. So the wider voluntary sector need to look creatively at how they work together, about jointly funding services. They cannot any longer take local government funding as a definite. It needs to be seen that this is a reducing grant and ideally we would encourage projects if at all possible to get to the point of being self-sufficient.

“As a council we anticipated a 0.4% reduction in our grant from the Scottish Government and we now have a 2.4% reduction. We are now £10 or £11 million short of where we thought we would be.”

“Given my background in the voluntary sector that is pretty much impossible and a lot of grant funders match core council funding, but there has to be a much smarter way of doing this. It is perhaps sharing buildings, sharing admin staff, management costs to allow the service users to get the best service – that is perhaps the model we need to look at.

“The example I often quote is Norton Park where they have one set of admin staff funded by around 30 organisations who occupy space in the building. Maybe north Edinburgh has to look at doing that kind of thing. The reality of where we are at with public sector funding means we have to look at becoming less dependent on local government funding.”

“We have just bought Caroline Park House which could perhaps become a one-stop shop for people getting welfare advice or to see a councillor. Models like that we genuinely need to look at.

“Projects like Family Circle and Screen Education are based in council flats. I would rather these were released as homes. There is different thinking needed and groups cannot rely on local government funding longterm.

“The call to Ben is to work with Gordon Munro and me to ask if within government, the council and the local health boards do something to save the community health projects.”

Ben Macpherson MSP for Edinburgh Northern and Leith said: “I attended the meeting on Monday at the Millennium Centre, where affected organisations and local people came together to share their feelings about the IJB’s decisions.

“I am in regular contact with the organisations affected in my constituency and I will continue to support them as much as I can.

“Early next year, I am due to meet with the Chief Officer of the IJB about their decisions and I have also corresponded with Jeane Freeman MSP, Cabinet Secretary for Health and Sport, about the issues involved. I am also looking at other potential ways to support the organisations involved and will continue to work with others to find solutions.

“While I appreciate that all local elected members have sincere concerns about the situation, I think the best outcome can be achieved by all of us working together constructively – my focus is on finding a way to support the local organisations involved and the people who use their services.”

The Edinburgh Reporter asked Councillor Ricky Henderson who heads up the IJB about the likely overspend recently, ahead of Derek Mackay’s draft budget announcement last week. He said then that he hoped The Scottish Government would recognise the demand on local government services, saying that funding is needed to deliver the day to day services that people really need. He continued : “There is a projected overspend for this financial year. The budget comes from NHS Lothian and the council and the IJB allocates it back to the partners to spend on our behalf. I know that senior officials are working very hard to bring that projected overspend back into line and to find ways of making sure that we get to the end of the financial year on balance. But there is pressure.  There is a demand for services and  demographic pressures are well known. There is a greater demand for our services and we have reduced resources at our disposal. That is always a challenge and we will try to meet that challenge as we go forward.”

Cllr Day and Munro attended the meeting called at Muirhouse Millennium Centre on Monday night to discuss what the community will now do about Pilton Community Health Project which may face closure as a result of funding cuts. The community have now agreed to set up a campaign steering group to look at how they can campaign for better funding for those parts of the city that need it more than others.

They presented a vocal protest outside the City Chambers on Friday about the proposed cuts.

Our main photo shows some of the protesters Photo Thomas Brown

Here is the letter sent to the Minister :