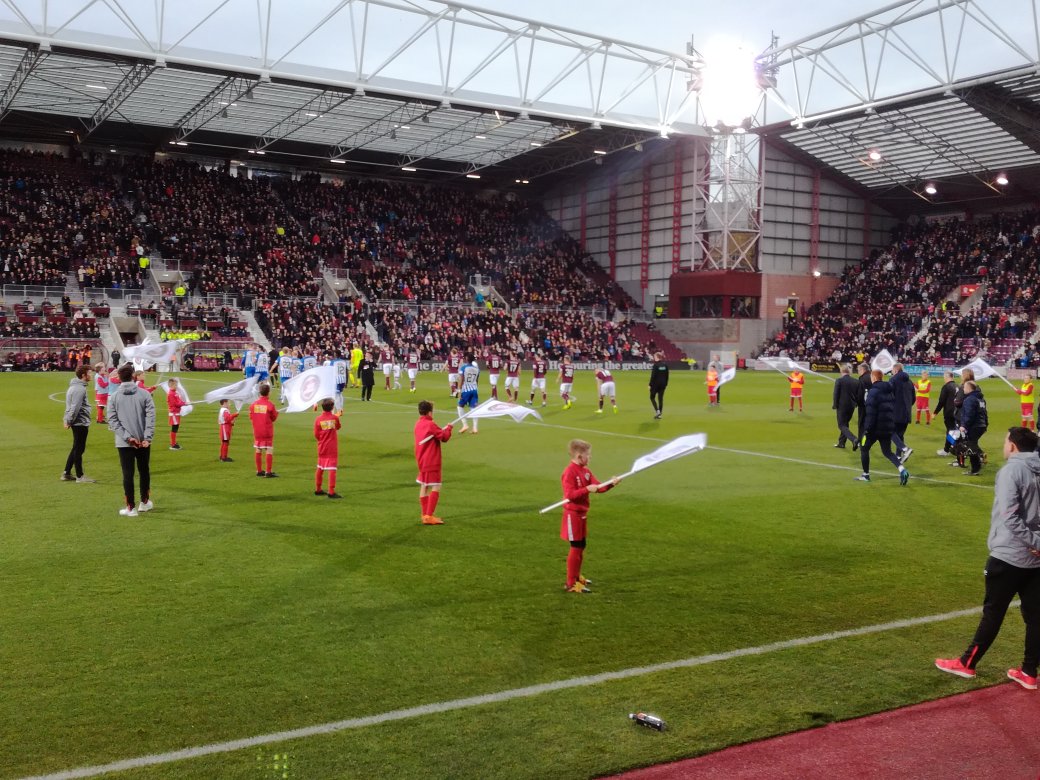 Hearts suffered a rare home defeat today when Kilmarnock grabbed all three points in the Ladbrokes Premiership encounter at Tynecastle. A goal from Millen towards the end of the game was enough to put a serious dent in any title aspirations the Gorgie side might have. In truth, Hearts could have played until midnight without scoring with the absence of the injured Steven Naismith being felt more than ever.

After last week’s debacle at Celtic Park, Hearts manager Craig Levein made four changes to the team with Ben Garuccio, Olly Lee, Callumn Morrison and Craig Wighton returning to the side with Demetri Mitchell, Harry Cochrane, Jake Mulraney and Sean Clare stepping down.

Hearts thought they might have had a penalty in the opening minutes when Callumn Morrison sped past Tshibola before being brought down by the Killie man inside the penalty box. Play on said referee Don Robertson who didn’t have the best of afternoons.

Hearts keeper Bobby Zlamal then denied the visitors with a great save from Burke as the afternoon took on the pattern of Hearts dominating possession with Killie proving very dangerous on the counter-attack.

Steven MacLean was the next Hearts player to be denied a penalty when he appeared to be tripped by Boyd. Again, Mr Robertson wasn’t interested.

Craig Wighton’s shot hit the junction of the post and crossbar just before half-time but this was as close as Hearts got to scoring.

The only goal of the game arrived 18 minutes from the end when Killie broke forward. Burke set up Millen who fired the ball past Hearts keeper Bobby Zlamal from close range. The Hearts support could sense their team’s unbeaten home record this season was about to end. And it did.

Hearts were too predictable going forward and there were far too many aimless balls into the Killie penalty box which was meat and drink for the visiting defence. The Maroons haven’t scored a goal since Steven Naismith limped off during the Betfred Cup semi-final defeat to Celtic a fortnight ago.

Craig Levein cut a frustrated figure after the game. He told the official Hearts website:

“There’s loads of ways of losing a match, but that’s the most frustrating. We should have been better in the final third but to lose that way makes me feel really frustrated.

“The players that we’ve got in the team that are injured, I think it’s easier for us to score goals with them in the team and everybody knows that, but at the same time we need people to step up, and at times like this to put the ball in the back of the net.

“It’s not just good players it’s strength of character that’s important and that sometimes is missed more than the actual quality of the player.

“So, the problem is not that we’re missing just good players we’re missing people with strength of character who’ve done things in the past and understand certain situations and know how to deal with them.

“We’ve had a difficult period and we can’t continue going through the season winning every match. It’s a reality to check to have lost here for the first time in what feels like a long time and it leaves a bitter taste.”