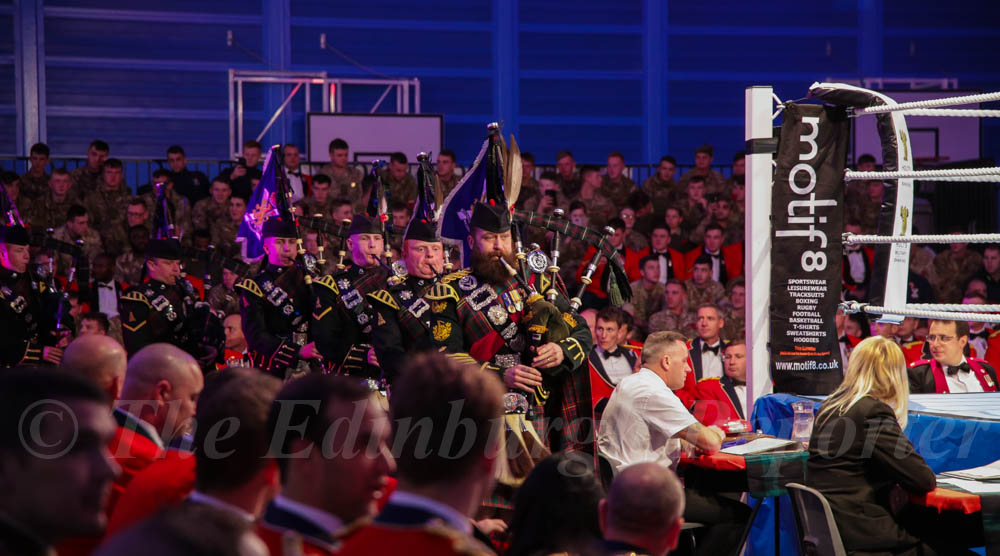 Last night (Thursday) at the Oriam Sports Performance Centre Edinburgh, The Royal Regiment of Scotland (SCOTS) competed, internally, in a Regimental Boxing Event. The five Regular battalions and the two Reserve battalions were represented by boxers competing for battalion pride and ‘bragging rights’.

This was the third iteration of the bi-annual event, which was first tested at Meadowbank Stadium, Edinburgh in 2014 and again in the same venue in 2016.

There were ten bouts and the format was run in accordance with the Army BA legislation and Regimental protocol. As the event commenced and prior to each bout, boxers were introduced to the waiting crowd by their respective battalion pipe tune before the lights and smoke were engaged and the boxer’s personal choice of music covered their short walk to the roped arena.

In the interval following bout five, the Regimental family hosted and entertained invited guests in traditional SCOTS style – the Pipes and Drums from 4 SCOTS and the SCOTS Band playing a combined set.

This very special occasion was summarised in a final prize giving ceremony with awards being presented to the best (i.e. most skilful) boxer, most courageous boxer and, finally, the champion battalion.

The Colonel of the Regiment congratulated those gladiators who had the courage to step through the ropes and represent both themselves and their battalion. He then went on to remind everyone of those core values and standards that were on display throughout the event and the relevance they held to how they should conduct themselves as soldiers in or out of the boxing ring. To make a success of a military career, the SCOTS soldiers must live by a bespoke set of values and standards, which include; courage, loyalty, honesty, integrity, respect for others and discipline. These values and standards are a handrail to how soldiers conduct themselves in every aspect of life and they are especially true of boxing and the challenges it brings them.

Although most soldiers rarely mention it, they are fiercely proud of their own cap badge. They are completely loyal to each other and the unit they represent. This loyalty is fostered through the Army’s values and standards from the moment the soldier puts on a uniform. The ethos; team is everything and individuals alone are nothing, is enhanced in all military activities.

Unit pride and loyalty starts at the very lowest level from living in shared accommodation, working and fighting together in a shell scrape, through every other unit formation right up to regimental level. This cohesion and loyalty is challenged daily; however, through the very nature of a career in the Army this often culminates and is tested on the battlefield.

Forming bonds and building a team, testing individual and team discipline, challenging courage, showing respect for your opponent and rewarding victory (and defeat) is replicated perfectly in boxing, especially at the regimental level where the stakes seem so much higher.

“The credit belongs to the man who is actually in the arena, whose face is marred by dust and sweat and blood; who strives valiantly; who errs, who comes short again and again, because there is no effort without error and shortcoming; but who does actually strive to do the deeds; who knows great enthusiasms, the great devotions; who spends himself in a worthy cause; who at the best knows in the end the triumph of high achievement, and who at the worst, if he fails, at least fails while daring greatly, so that his place shall never be with those cold and timid souls who neither know victory nor defeat”. – Theodore Roosevelt, 1910.