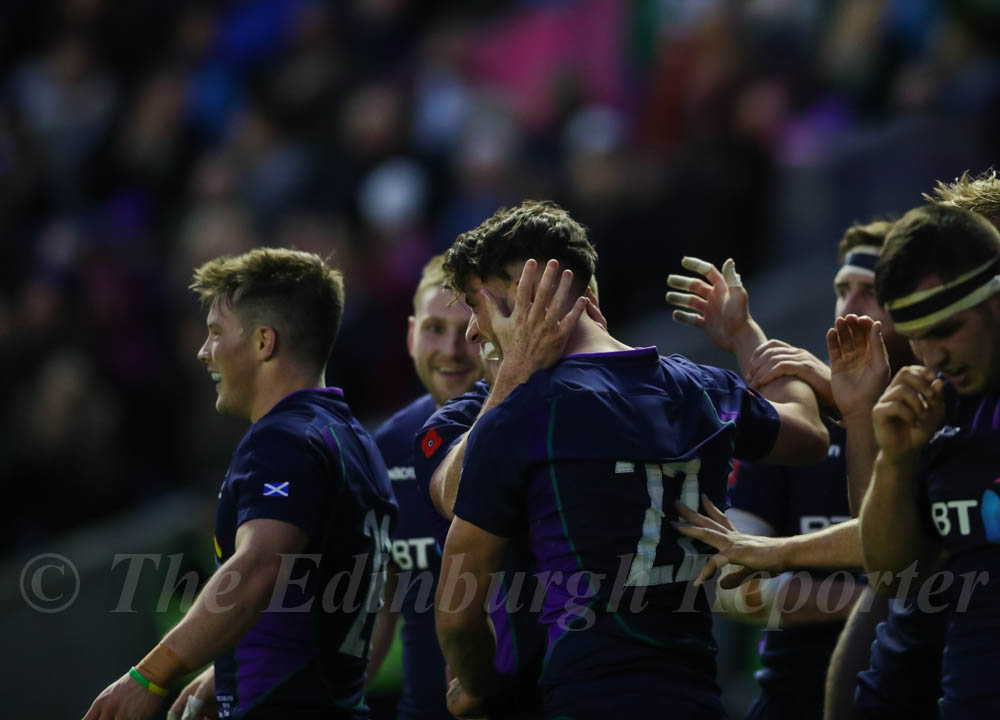 That most mercurial of mercurial rugby nations, Fiji, were the first of three visitors to BT Murrayfield for Scotland’s 2018 Autumn International Series. Having lost to the Pacific Islanders last time they played, Scotland had made great strides forward on their way to the 2019 World Cup in Japan.

Before the match the Royal Marines delivered the match ball with their traditional abseil from the West Stand, before the announcer called for all present to respect a minute’s silence in respect of the Fallen of all Nationalities.

Those great Scottish strides looked a bit shaky early on a as couple of errors lead to an early penalty chance for the visitors which Ben Volavola slotted home for 0-3 after 2 minutes.

Fiji then continued to keep the home side pinned in their own half for the following few minutes before the Scots managed to work their way clear and deep into opposition territory.

A couple of penalties put the match close to the Fijian line and the resultant catch and drive from a penalty line out saw Allan Dell score his first International try. Greig Laidlaw then converted for 7-3 with 12 minutes played.

Five minutes later, another front row, Fraser Brown this time, doubled the Scots’ try tally to two. They had worked their way forward using the ball well until in close when Peter Horne just failed to cross, but, with the recycle, Brown burrowed over. With Laidlaw converting again, it was 14-3 after 17 minutes.

Fiji then came straight back at the home side, using their big runners to hammer through and draw in the defence. A lineout fail from the Scottish pack was gathered by Fiji and driven forward. The final offload to Bill Mata gave the Edinburgh back-row 10 metres, or so, to blast through and dive under the posts for Fiji’s first try and 14-8. Volavola then knocked over the simple conversion to make it 14-10 as the game entered the second quarter.

From the restart, Fiji just turned up the gas and Scotland barely saw the ball, never mind touched it, for the next five minutes as the men from the Pacific showed why they are famous for their running play. Men flew at the home defence from all angles, offloading over, and under, tackles to keep the ball alive and moving forward.

Just reward came in the 26th minute from Semi Radrada who was put through a yawning gap by the final pass from Tevita Cavabuti and in for their second, converted try, and the lead at 14-17.

But that was the final grandstand play by the visitors as Scotland regrouped and went on the offensive.

The final 10 minutes of the half was almost all inside Fiji’s half and Scotland managed to cross the line twice before having a third attempt confirmed.

Two yellows in quick succession for Fiji had them at a severe disadvantage. The first for Cavabutu lead to Brown crashing over, but his second touchdown off the back of a maul was deemed to have been ‘guided’ by Jamie Richie so was disallowed. Then the Scottish pack drove Willem Nel over, but he fumbled the ball just short, another TMO ‘look’ confirming the on-field verdict.

Leone Nakarawa was then binned for another maul infringement giving the Scots a two man advantage and loads of space wide for Tommy Seymour to get on the end of a wide pass from Finn Russell and dive over in the corner.

Laidlaw then converted from out wide for a half time lead of 21-17.

With only 13 men on the pitch for the start of the second half, Fiji had little hope of containing the Scot’s resurgence and, two minutes into the half, Sean Maitland scored, under intense pressure, for his 10th International try and 26-17. Laidlaw , again converted so it was quickly 28-17.

And that was, essentially, game over. Fiji did their utmost, trying to break from deep, but, apart from a penalty chance around the 50 minute mark, the half was dominated by Scotland.

With Fiji trapped near their goal as the hour approached line they did what any, self-respecting International side would do, and tried to run it clear! That didn’t, naturally, go at all well, and lead, ultimately, to Seymour scoring his second try. Converted again by Laidlaw, it was now 35-17.

The sixth Scottish try had ‘Fiji’ written all over it as a build up of sublime passing, offloading and running put Seymour in the corner for his hat-trick and 40-17 on 62 minutes.

They continued to dominate play for the following 15 minutes, despite the visitors cranking up the heat once or twice, but the game was only going one way and that was back to the Fijian try line.

This time, it was back to the pack to provide the points. Driving along the goal line, the ball was recycled cleanly allowing Jamie Richie to drive through and ground the ball against the foot of the post for his first try for his country. With the conversion from Russell, Scotland were closing in on the magical 50-points mark at 47-17. There were, however, still 13 minutes left…

Scotland were now all over it and the eighth and final try came from another backs’ move and a debut try for sub, Adam Hastings. Two other subs, Josh Strauss and George Horne had made him a bit of space and the Glasgow man put Russell through and then run round to back him up. The sweetest of return passes from Russell to Hastings left the latest of that dynasty with a clear gallop to the line.

Russell converted once more and the final score was 54-17 to an ultimately dominant Scots’ team who were now looking forward to the monumentally bigger – in all senses – challenge from South African next weekend.