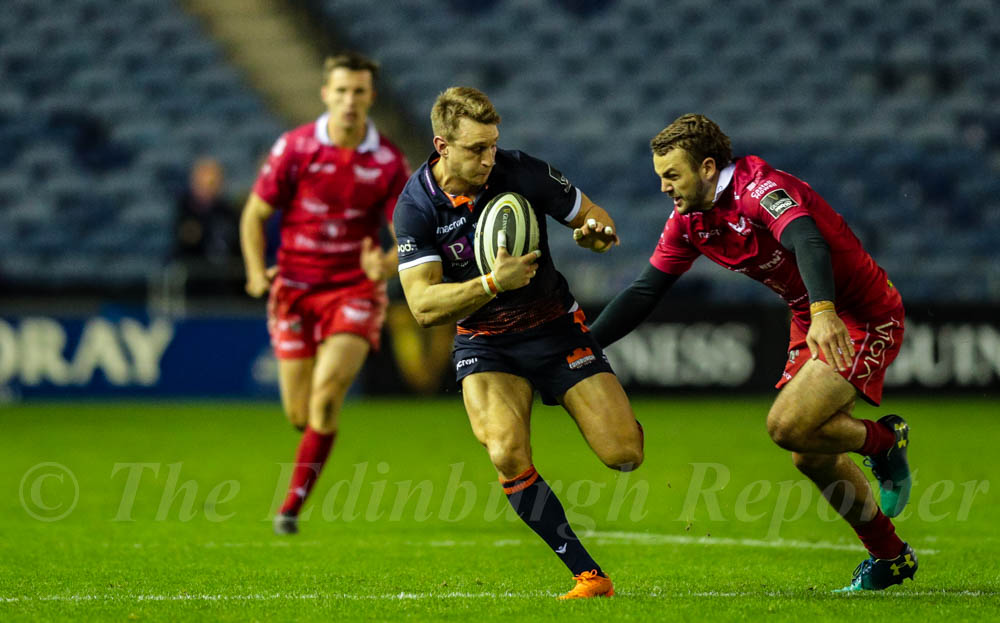 Round 8 of the Guinness PRO14 saw Edinburgh Rugby welcoming Llanelli Scarlets to BT Murrayfield. Hoping to put behind them the defeat at the hands of Zebre in the previous round, the home side were also attempting to maintain their 100% win record at the national stadium. With both sides having key personnel away on International duty, it was a chance for some of the younger and less experienced players to step up and showcase their talents on the big stage.

Early on it was Edinburgh’s back division who ‘stepped up’, with Duhan van der Merwe blasting a couple of holes in the visitor’s defence, before going over in the left corner from a Simon Hickey cross-kick.

The ‘try’ was, however, chalked off for a knock-on, but the game went back for a penalty to the home side. Winning their five-metre lineout, the Edinburgh pack drove through and Bill Mata burrowed over for the opening try. Hickey then converted for 7-0 with less than 10 minutes on the clock.

Scarlets won a penalty just after the restart but stand-off, Dan Jones just missed with his kick.

A short time later, the game was stopped to attend to a serious looking injury to one of the visiting side. The player injured was new Scotland pick, Blade Thomson, who had suffered a blow to his head that brought on the medical staff and stopped play while he was attended to and then carried off to receive further treatment. Following on from this, play resumed with a scrum to Scarlets and the visitors retained possession through the pack. With the defence pulled in, the ball was slung wide out to Morgan Williams and the wing slid over in the left corner for the try. Jones then converted to draw the sides level at 7-7 with just over 15 minutes played.

The home side then won a scrum straight from the off, thus giving them territorial advantage and a short trip to their second try.

With the ball won, Edinburgh attacked from all over the pitch, but the Scarlets’ defence held and, eventually, turned the ball over and cleared. But, from the line out win, the home side renewed their onslaught which lead to Tom Brown – aided by an excellent dummy run from van der Merwe – diving over in the right corner. Hickey missed the conversion, but 12-7 it was, with just over 15 minutes left in the half.

The home side took full advantage of a fumbled restart to set about the visitors’ defence again. A long period of intense pressure, once again, found the match encamped in the Scarlets’ 22, with the Welsh side eventually being penalised in front of their posts.

And, once again, Brown found himself on the end of the play which propelled him in for his second try in short succession. Hickey’s conversion just slid past the upright but, with 10 to go, it was 17-7 to Edinburgh.

Scarlets were next on the board with their second try of the match just as the half was drawing to a close. With the home side defence spread wide to counter, a neat grubber from Jones was chased over by centre, Paul Asquith, for the score. Jones then converted for 17-14 as the sides went in.

Scarlets had the better of the early second half play, and a series of penalties from the Edinburgh defence inside their 22 lead to Hickey seeing yellow. This gave the visitors a man extra which they soon took advantage of, puting wing Johnny McNicholl through for the lead with a try behind the posts. Jones converted and Scarlets now had a narrow advantage at 17-21.

Still a man down, Edinburgh set-to and pushed the visitors hard, camping in their 22 and drawing a couple of penalties. The forwards then took charge and rucked their way across the front of the posts, before another penalty saw them rucking their way to the goal line and the bonus-point try, front-row, Pierre Schoeman crashing over near the posts. With Hickey still off, it was down to replacement centre, Juan Pablo Socino to provide the extras and the 24-21 score line as the match approached the hour mark.

Scarlets almost ran in another try shortly afterwards, but, with Edinburgh’s pack dominant the game was largely confined to the visitors half for much of the remaining time. A yellow card for Scarlets’ Simon Gardiner a few minutes from the whistle, gave the home side a man over and, once again the forwards came up trumps with Mata leaping ‘like a salmon’ (as the great Bill Mclaren might have said) over the ruck to dot down for try number five. Hickey converted and with three minutes left, Edinburgh were 31-21 ahead.

They easily saw out the final couple of minutes to win their fourth Guinness PRO12 home win of the season and move up to third in their conference, just three points behind their opponents on the night, Llanelli Scarlets.