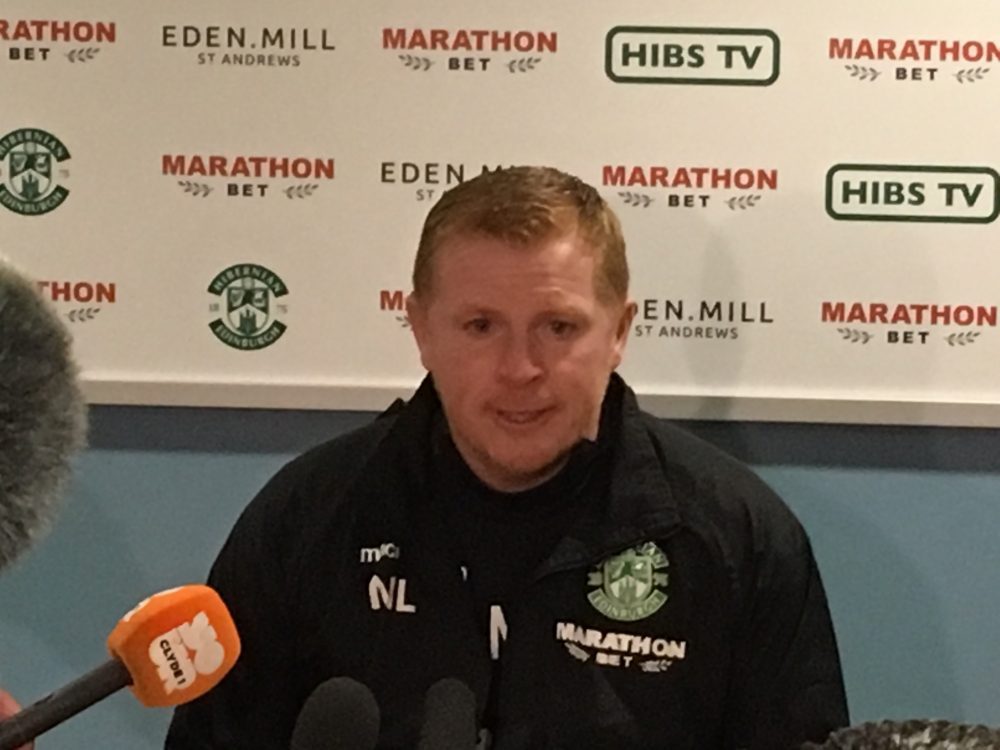 Smith claimed that Lennon was wrong to have reacted to the supporters behind him in the Main Stand when the referee’s assistant flagged Hearts’ late ‘goal’ as offside.

With the fans celebrating, Lennon smiled and gestured for them to calm down before being struck by a coin.

After claiming that Lennon was wrong, Smith then defended Kilmarnock’s striker Kris Boyd who celebrated scoring against Aberdeen by doing a ‘big belly’ gesture in response to persistent comments about his weight, right in front of the visiting supporters, describing the incident as a ‘laugh’

Hibs’ fans described Smith’s comments as ‘incredible’ and labelled him an ‘idiot’ and a ‘slaver’ although most agreed that Boyd’s behaviour did not merit criticism.

Smith told BBC Sportsound: “The way he (Lennon) is treated is disgraceful, it’s so bad.

“I would consider him a friend, I know Neil well, but my point about it was, you should not be reacting or going to the crowd.

“When players score a goal, why do they get booked when they go to the opposition fans?

“It should be the same for managers, just ignore the people.

Neil was wrong, in my opinion, to react to the incident that happened with the Hearts fans.

“And I would say that any manager should be the same.

“The reaction to it was terrible, but that’s not the point. The point is that any manager, it should be a regulation in the game that any manager should not react to the fans.”

Stewart then asked: When Boydy runs up to the Aberdeen fans, was that a laugh and a joke?”

Smith replied: “That was kind of a laugh, yeah.”

Stewart said: “How is that different from Lennon?”

Smith added: “Because he was at home and he didn’t go off the field.”

Stewart then pointed out that Lennon didn’t leave the dugout when the goal was chopped off.

Smith replied: “He was right in front of the away fans.”

Smith previously incurred the wrath of the Hibs’ fans following his condemnation of the supporters following the Scottish Cup final victory over Rangers at Hampden in 2016.

The Hibs’ fans demonstrated their support of Lennon by unfurling a banner in tribute to him and chanting his name during Saturday’s home game against St Johnstone.