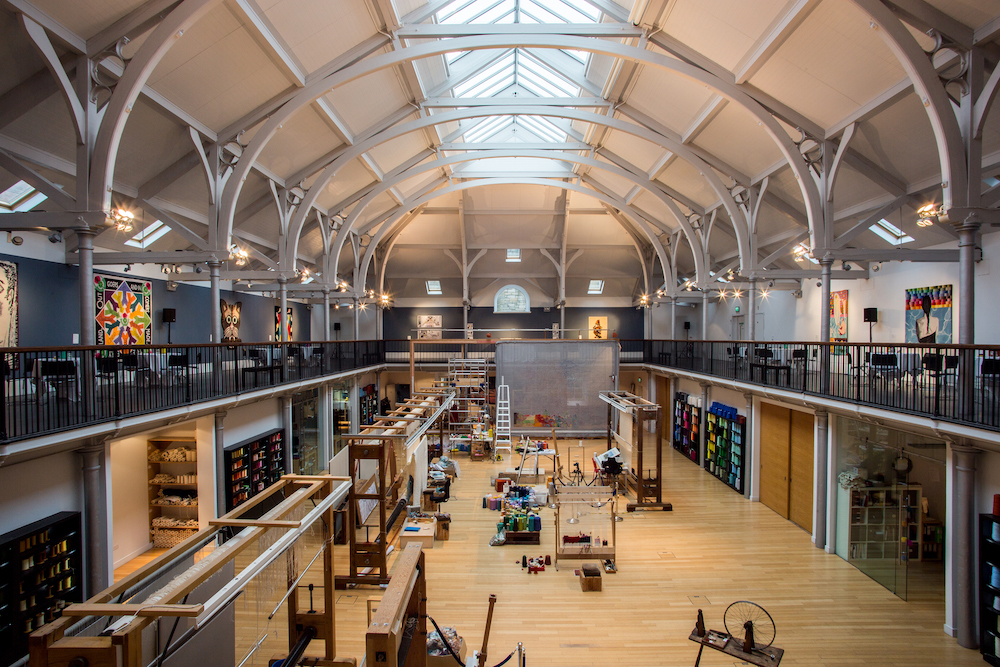 It is ten years since Dovecot moved into the former Infirmary Street Baths and they are going to celebrate the milestone with the completion of a new tapestry woven by Dovecot Master Weaver, David Cochrane and Junior Weaver Ben Hymers.

Prior to its location at Infirmary Street, the tapestry studio known as Dovecot Studios, was originally sited on the grounds of Corstorphine Castle which was demolished in around 1797. The company took its’ name from the 16th century Castle ‘doocot’, still present at the site today. Dovecot Studios was at risk of closure in 2000, but was saved and finally moved in 2008 to Infirmary Street following renovation of the former Victorian baths building.

Dovecot Master Weaver, David Cochrane, has had a longstanding interest in the representation of water in tapestry that harks back to Raphael’s fishermen and reflective pools of water in Flemish verdure tapestries. By sourcing his design from his own photographic imagery, and bringing the subject matter closer to home in the gently rippled surface of a Scottish inland canal, Cochrane brings this longstanding subject matter in tapestry into the modern day.

Exercising his supreme skill as a Master Weaver, Cochrane has created an almost photographic interpretation of light and movement on the water surface in this shimmering design.

This image is taken from the surface of the Crinan Canal in Argyll and Bute, which links the shores of Loch Fyne to the Sound of Jura. With an overall composition that fills the tapestry, the subtle colour shifts mark out the ripples and eddies of the water and evoke gentle movement and hidden depths in the reflections on the surface; the image is never still but remains meditative, subtle and fascinating. The work echoes the natural colours of the water through the nature fibres of tapestry wool.

To commemorate this special occasion Dovecot are hosting a 10 Year Anniversary event on Tuesday 4 December where one lucky guest will be chosen to perform the ‘cutting off ceremony,’ which  traditionally is not performed by the weavers who worked on the tapestry.