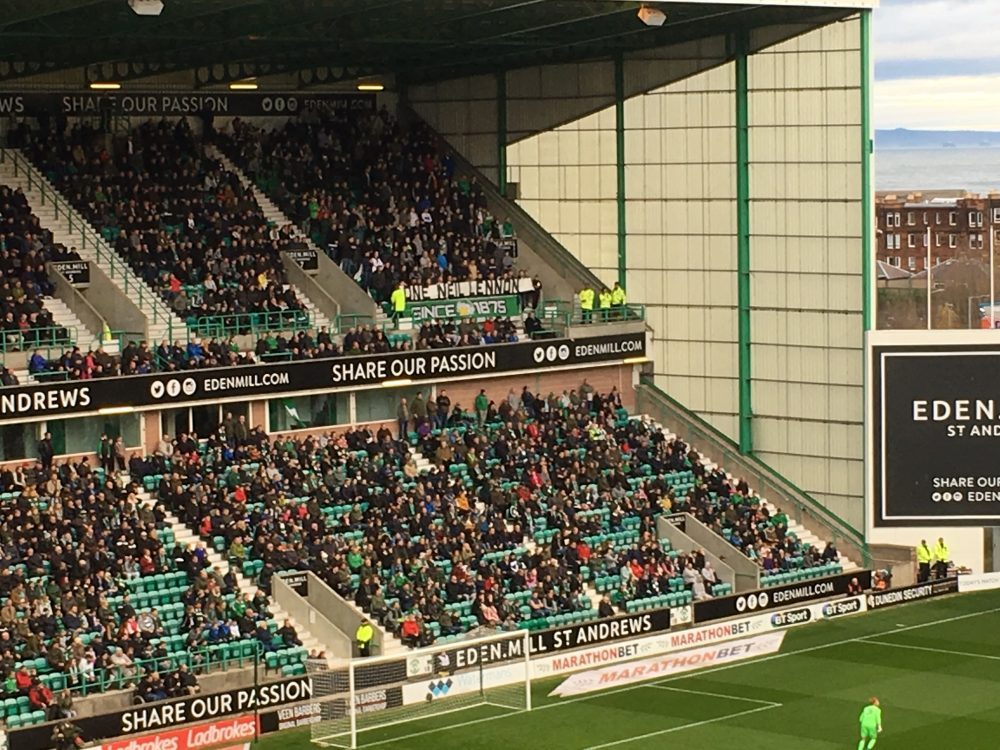 A late header from Joe Shaughnessy secured a deserved three points for on-form St Johnstone against a lacklustre Hibs side at Easter Road this afternoon.

Former Hibs’ skipper Liam Craig started for the visitors whilst David Wotherspoon and Danny Swanson were listed amongst the substitutes.

After the unsavoury events at Tynecastle in midweek, Lennon received a rapturous welcome from the Hibs’ fans and the singing section in the Famous Five Upper unfurled a banner in his honour.

Marvin Bartley retained the captain’s armband as Hibs dominated the early part of the game but it was the visitors who almost opened the scoring against the run of play in the 13th minute when Tristan Nydam struck the crossbar with a fantastic 25 yard effort.

Hibs continued to press forward but their chances were limited to a few long-range shots which didn’t trouble Saints’ keeper Zander Clark.

At the other end, St Johnstone had three free-kicks in dangerous positions but failed to capitalise on them, then Craig went close with a fierce 35-yards that dropped just over the bar.

Just after the restart Drey Wright picked out the unmarked Tony Watt at the back but the former Hearts striker headed wide from close range.

Hibs almost took the lead in the 56th minute but Zander Clark produced a superb save to deny Boyle then moments later did likewise to turn Stevie Mallan’s long range effort round the post.

Clark then saved from MacLaren following a fine cross from Lewis Stevenson.

Former Hibs’ winger Swanson came off the bench in the 63rd minute and made an immediate impact winning a controversial penalty kick after being bundled over by Bartley.

Swanson took the resultant spotkick but Adam Bogdan produced a fantastic save to keep the score level. Incredibly this was the Saints’ third consecutive miss from 12-yards.

Substitute McGregor then went close with a header from Mallan’s corner before former Hearts’ midfielder Ross Callachan tested Bogdan from close range as both sides looked to win the game.

MacLaren almost opened the scoring with a looping header which ended on the roof of the net, but it was the visitors who eventually secured the three points with two minutes remaining when Wotherspoon’s free kick was headed in by Shaughnessy to spark wild scenes of celebration amongst the travelling fans.

After the game Hibs’ assistant coach Garry Parker told BBC Scotland: “We were very poor today. We created nothing going forward. We made poor decisions. I’ve never seen the team pass to the opposition so much. Terrible. Individual mistakes, decision-making, everything – there was nothing there.”

St Johnstone manager Tommy Wright said: “Overall, we just about deserved it. We’ve a lot of quality and I think you saw that today. The Hibs fans were pretty quiet. We played some good football and I’m really pleased. They are a good squad and that is a massive result for us.”