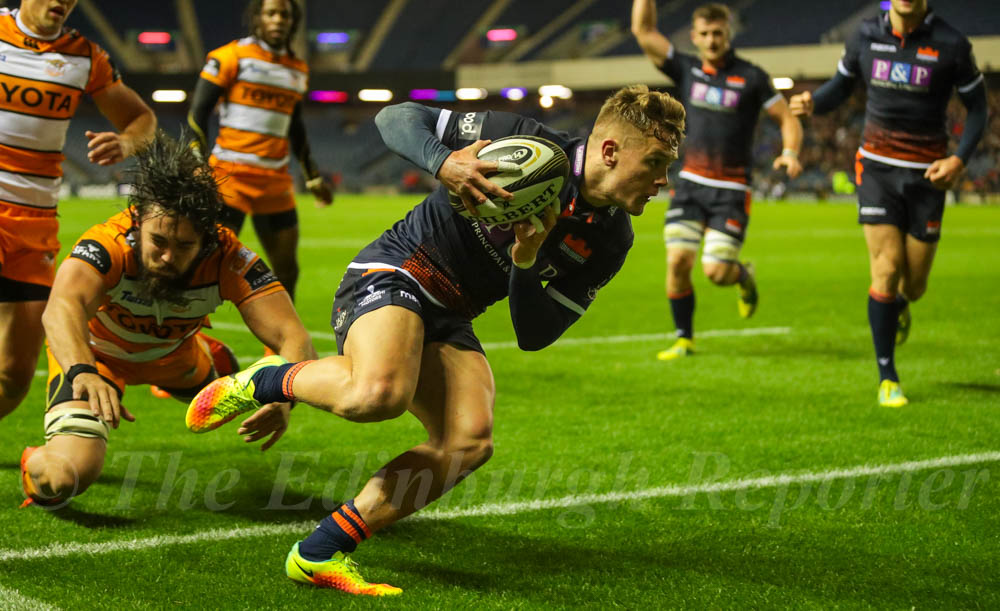 Second bonus-point win in succession for Edinburgh at home. South Africa’s Toyota Cheetahs made their long haul flight to the capital to face an Edinburgh Rugby side who had shown they could dig deep, by coming from behind the previous week to beat Benetton at BT Murrayfield thus maintaining their 100% home record – two from two…

The home side started the match well, as they had the previous week and, by 10 minutes in, were 6-0 ahead thanks to two Simon Hickey penalties.

By the time Edinburgh crossed the line for the first try of the evening, the Cheetahs had made a couple of line breaks, but good home defence, coupled with a few handling errors from the visitors had kept them at bay.

The try came from advances made through the back division into the opposition 22, before the pack took over and drove the ball to the try-line. A few recycles later, and Ben Toolis had touched down for the try. Hickey followed up with another successful kick and, with 22 minutes on the clock, it was 13-0.

Edinburgh probably edged the next 10 minutes, but the Cheetah’s defence, fairly easily, broke down any threat and, as the half hour came and went, they were enjoying a long period of possession.

Their first score of the evening came from deep in their own half following another breakdown recycle.

The ball was whipped out wide through the hands – a couple of the forwards showing great handling skills – with the final pass delivered to Sibhale Maxwane. The wing then showed a clean pair of heels to Edinburgh’s defence, leaving several players sprawling in his wake. He was finally brought down five metres out, but managed to release the ball to centre, Nico Lee, who had the, relatively, easy task of diving over for the score. Tian Schoeman then converted for 13-7 with less than five minute until the break.

Less than a minute before said break, the home side turned up the wick and put their wing, Darcy Graham over in the corner thanks to their own brand of deft handling. Hickey then converted again to take the score to 20-7 at half time.

The Cheetah’s had, by far, the better start to the second half and took just three minutes to increase their points tally. They had driven Edinburgh deep and the pack drew in the defence, creating an overlap for Maxwane to exploit, the winger crashing over in the corner for the try. Schoeman converted again and the score was 20-14. This put Edinburgh on the back foot and the visitors took full advantage. Piling on the pressure and getting Maxwane over the line again, this time next to the posts, for his second try before 10 minutes of the half had elapsed. Schoeman had a far simpler conversion this time and he knocked the ball over to take the Cheetahs into a narrow 21-20 lead.

On a night which favoured the kickers, two minutes later, Hickey slotted another penalty through to regain the lead for the home side at 23-21, leaving the final half hour, or so, finely balanced.

Just over the hour mark, Edinburgh had their initial drive at the line from a penalty foiled as the ball was turned over, but persistence paid off, with a series of penalties lead to Bill Mata driving over for the third Edinburgh try, converted again by Hickey to pull the home side two scores clear at 30-21. The final 15 minutes was entertaining end-to-end rugby, with both sides probing, but the last score of the evening fell to Edinburgh. Another series of rucks and mauls across the visitors’ line bore fruit when Jamie Richie, who had earlier replaced Hamish Watson on the flank, came up with the goods for the bonus point try with two minutes remaining. Once again, Hickey converted to finish off a thrilling match 37-21 to Edinburgh.