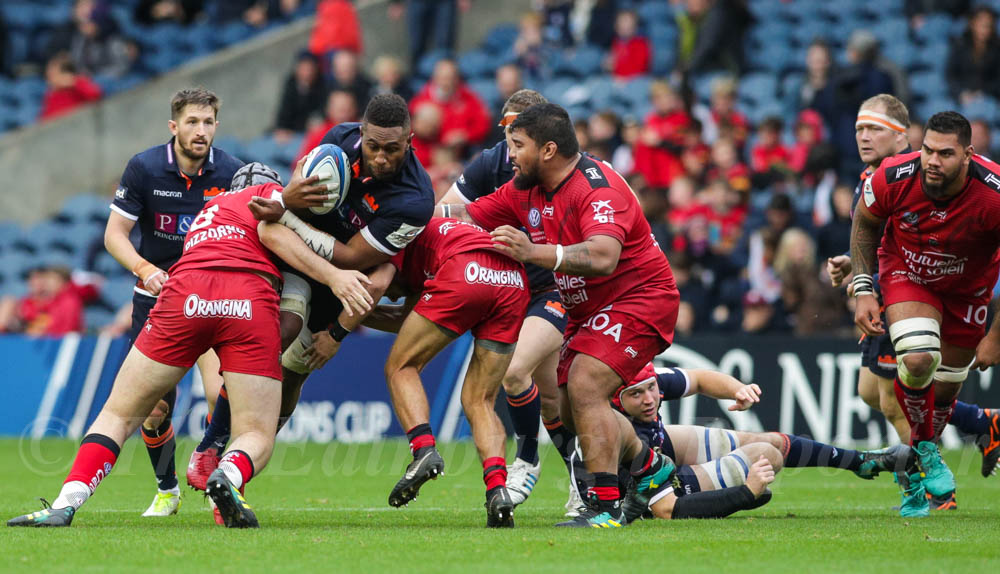 Coming off the back of a narrow defeat to Montpelier, Edinburgh welcomed the giants – in all senses of the word – of RC Toulon to BT Murrayfield for their Round 2 match in this season’s European Rugby Champions Cup.

Widely predicted to be a thumping for the home side, thanks to Toulon ‘hurting’ from their defeat at home the previous week, the match went on to demonstrate that predictions in the game of rugby can be as accurate as predictions in any field of sport.

Following the usual early exchanges, the home side set to and quickly pushed into the Toulon 22 where they won a penalty, successfully converted by No. 10, Jaco van der Walt for 3-0.

The next ten minutes were fairly evenly matched with both sides attacking and defending in fairly equal measure. However, the breakthrough came Edinburgh’s way as the clock approached the 15 minute mark. The pack were busy beavering away at the Toulon line, but couldn’t quite make the vital last few inches. WP Nel almost touched down, but the ball landed on a boot and he was forced to recycle. Next up with hands on was lock, Ben Toolis, and he made no mistake, driving through and grounding the ball on the line for the first try. Van der Walt then knocked over his second kick of the day and it was 10-0 to the ‘underdogs’.

This seemed to wake up the visitors and they spent most of the next five minutes blasting away at the home defence with their huge runners, gradually pushing the Edinburgh side back, nearer to their line.

This relentless pressure eventually told and centre, Malakai Fekitoa, broke through a couple of tackles and got his pass away, the ball ending up in the hands of lock, Romain Taofifenua. He was driven forward by one of his team mates into a three-up tackle, but spun away to ground the ball over the line. Anthony Belleau then converted for 10-7. Edinburgh came straight back from the restart and scored their second try within a couple of minutes of the kick off. Magnus Bradbury carried to just short of the Toulon 22 before being tackled, but the ball was quickly on it’s way, through the hands, to where it found Matt Scott in the centre of the pitch. He ghosted through a couple of non-existent attempts to stop him, before offloading the ball the Henry Pyrgos to trot in and dot down under the posts. Van der Walt again converted and it was 17-7 with 25 minutes played.

Edinburgh then dominated play, both in attack and defence for the rest of the half, winning a further three penalties to allow van der Walt to draw the home side well clear, 26-7, at the break.

Still, plenty of time for Toulon to ramp up the heat in the second half, was there not..?

The ‘heat’, as it turned out, was ramped up by the home side as the teams returned to the fray for the second half. Continuing on from where they had left off, Edinburgh worked their way up to, and into, Toulon’s 22, driving the French side backwards. The smallest man on the pitch, Darcy Graham, then made significant ground down the centre, just being stopped a few metres out. However, captain, Stuart McInally was on hand to pick up and dive over for the third Edinburgh try of the match. The metronomic van der Walt slotted the easy conversion through and things were looking decidedly rosy for the home side at 33-7.

Their resolve was then severely tested for the next 25 minutes, or so, as the visitors rolled their sleeves up and went on the offensive. The usual raft of second half substitutions did little to unsettle either side, but Edinburgh’s defence was resolute. Being noted for having big leads ‘removed’, the home side stepped up to the mark and resisted all attempts, from distance and close-in, by the three-times European Champions to add to their score.

Until the 71st minute, at least. Edinburgh had begun to come back to the attacking game, but Toulon had defended well and didn’t look particularly threatened. Their score came as the clock ticked over the 10 minutes to go mark when Fekitoa pulled in a couple of defenders near half way, leaving space down the line. He got his second, decisive offload away to sub, Daniel Ikpefan who had a clear run in to the line, while constantly over his shoulder checking to see if it was true that nobody was chasing. French legend, Francois Trinh-Duc successfully converted, but with less than eight minutes to play, the match was all but over. Apart from an elusive bonus-point… Two minutes later, that ‘elusive’ point was in the bag. Attacking hard from the off, Edinburgh forced Toulon onto the back foot in their own 22, with the visitors scrambling to keep the ball alive. The final nail in the coffin came, when Trinh-Duc flipped the ball up from the ground only for it to drop into the hands of the grateful Chris Dean. The Edinburgh man then had virtually nothing else to do other than fall over the line for the bonus-point try. Simon Hickey, on for van der Walt, maintained the 100% kicking record of the South African with the conversion, allowing Edinburgh to see out the remainder of the match and romp home 40-14 in a match that, probably, went against most of those pre-match ‘predictions’.