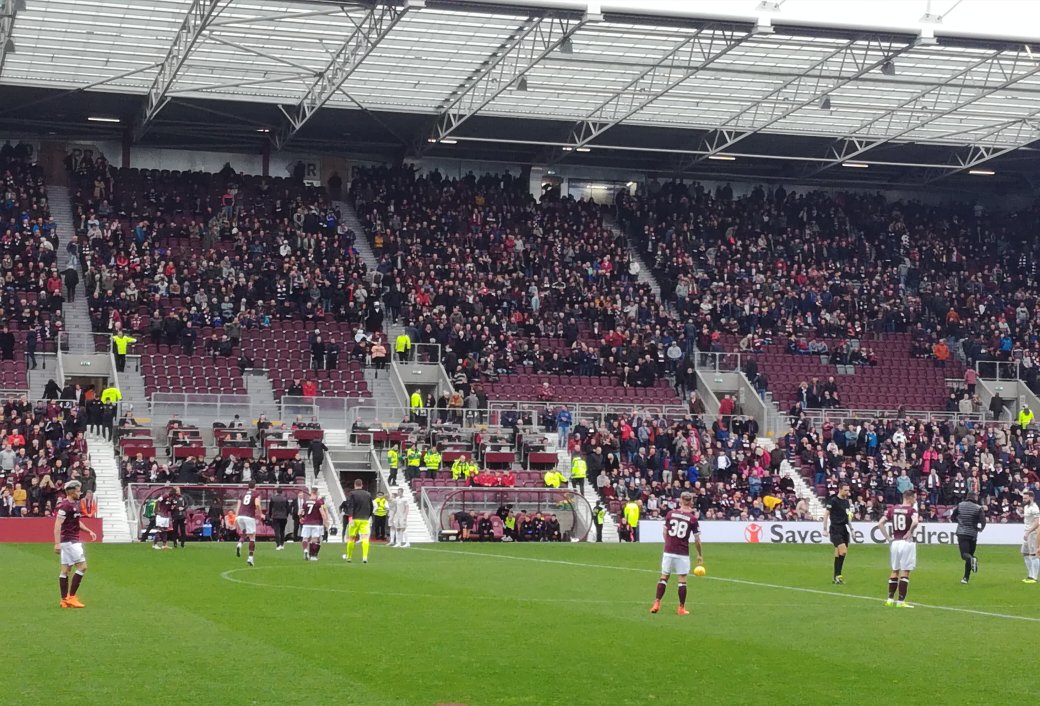 Hearts overcame a plethora of absent top players and an overly-physical challenge from Aberdeen to extend their lead at the top of the Ladbrokes Premiership to three points after a difficult week at Tynecastle. Goals in the first half from Arnaud Djoum and Steven Naismith – a penalty – secured the win despite a second half fightback (literally) from the visitors who scored with a penalty of their own through Mackay-Steven.

Less than a fortnight ago Hearts lost their unbeaten record when defensive lapses at Ibrox cost them dearly in a 3-1 defeat to Rangers. In the period since, the table-topping Maroons have lost defender John Souttar and striker Uche Ikpeazu to long-term injury, the pair joining captain Christophe Berra with lengthy periods on the treatment table.

The news about Souttar and Ikpeazu had somewhat deflated the buoyancy among the Hearts support. They were aghast as they headed to Tynecastle on Saturday afternoon when they heard that another influential player – Peter Haring – would also miss out against the Dons due to a muscle injury. Add the suspended Michael Smith to the absentee list and my pre-match phone call to my grandson Jack to bring along his football boots wasn’t entirely without jest.

Hearts boss Craig Levein made four changes to the team that went down at Ibrox – the aforementioned Souttar, Ikpeazu and Haring to injury and Smith to suspension. In came Oliver Bozanic, Clevid Dikamona and Callumn Morrison and there was a welcome return for young full back Marcus Gordinho.

There were more than 18,000 fans inside Tynecastle and the travelling Aberdeen support made their customary noise from the Roseburn Stand to add to the atmosphere. It was an atmosphere that appeared to spook some of the Aberdeen players as Hearts were camped in the visitor’s half for much of the opening period. There were early indications of the physical approach deployed by Derek McInnes’ side when Dikamona, Naismith and Jimmy Dunne were all wrestled to the ground early on, However, referee Kevin Clancy waved away Hearts appeals for penalties. The official was to have an indifferent afternoon.

For all their dominance it took Hearts until nine minutes before half-time to break the deadlock. Olly Lee directed a free-kick to Callumn Morrison whose cross into the Aberdeen penalty box was inch perfect for Arnaud Djoum to head home to put the home team ahead.

Hearts were rampant and all over the visitors like a rash. They deservedly doubled their lead four minutes before the interval when Steven Naismith was fouled inside the Dons penalty box by Ferguson. The penalty award looked a soft one, but it was perhaps justice given the earlier fouls that went unnoticed by Mr Clancy. Naismith buried the spot kick past Dons keeper Lewis and Hearts were 2-0 ahead.

As the teams came off the field at half-time there was the curious sight of Aberdeen manager Derek McInnes running across the field presumably to challenge referee Clancy – closely followed in hot pursuit by Hearts boss Craig Levein. All that was missing was the theme tune to 1970s television favourite Benny Hill…

Aberdeen brought on one-time Hearts target Niall McGinn and Scott Wright at the beginning of the second half and Hearts took time to adjust to the new shape of the visitors.

The Dons caused Hearts more problems in the second period with Marcus Godinho, in particular, looking troubled by the pace of McGinn. Indeed, ten minutes into the second half, Godinho tripped McGinn inside the Hearts penalty box. Mackay-Steven fired home the resultant penalty kick and the Dons were back in the game.

In the 78th minute Hearts should have put the game to bed when they were awarded another penalty kick. Hearts substitute Sean Clare – making his Hearts debut – was pulled down inside the Dons penalty box. However, this time Naismith saw his penalty saved by keeper Lewis.

Hearts safely saw out the remainder of the game to record another home win, a result and performance all the more impressive when you consider the number of influential players missing.

“We felt we didn’t do ourselves justice in our last game against Rangers – we manufactured a situation that allowed them to win the game and we feel we could have done much better. So, we felt we had making-up to do from that.

“People were saying we had lost two important players on top of Christophe Berra – and that’s true – and it was important that we showed everybody we had the squad to be able to cope.

“I know it is only one match, but certainly the guys who came in – Clevid Dikamona and Oli Bozanic came in and we were missing Peter Haring and Michael Smith today as well – proved that our form this season isn’t one of us being on an upward curve and we’d drop off after that.

“We need to maintain the standards, but it was a good performance against a resurgent Aberdeen side.”

Given the way his team fouled and wrestled to the ground any Hearts player within their vicinity, it could be argued they were way too aggressive.

Hearts now head to Dens Park on Tuesday and their re-arranged Ladbrokes Premiership game with bottom side Dundee. A win there and the Jambos will be six points ahead at the top of the table.