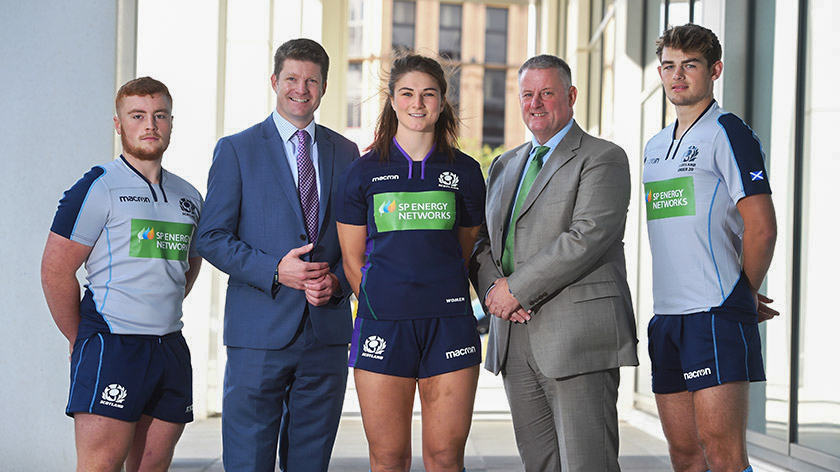 SP Energy Networks sign up as the new sponsor of the Scotland Women’s rugby squad.

The electricity network company’s distinctive green logo will feature on the front of the Scotland Women home and alternate strips for the 2018/19 season and the agreement also includes sponsorship rights for the men’s Scotland U20 and Scotland U18 squads and Scotland Women’s 7s team. This will be the first time since 2009, the women’s team has had a separate shirt sponsor from the men’s side.

Signing with Scottish Rugby underlines SP Energy Networks’ commitment to supporting women and girls in engineering and in sport.

CEO of SP Energy Networks, Frank Mitchell, said: “We are proud to sponsor Scotland Women as a new, exciting season is about to get underway.

“SP Energy Networks is committed to supporting women and girls in our workplaces, through our apprenticeships, women returners’ programmes and through STEM education in schools, colleges and universities, and our deal with Scotland Women is an extension of that. Through this new partnership we will help change many young women’s attitudes to opportunities in sport and in pursuing a career in engineering.

“SP Energy Networks will support rugby at all levels and ages, so we’re also delighted that this includes the talent of the future competing at under-18 and under-20 age grades.”

Scottish Rugby’s Chief Operating Officer Dominic McKay said: “We are very proud to be able to bring in an organisation like SP Energy Networks and develop that relationship to the extent they are now investing in our Scotland Women and age-grade teams at this level.

“Scottish Rugby has focussed heavily on developing the women’s and youth rugby programmes in recent years and this significant sponsorship deal reflects how attractive those areas of the game have become, through improving results, to blue chip companies who want to associate themselves with the sport and the communities these teams represent.”

As part of the deal Scottish Rugby will share SP Energy Networks’ key messaging around safety, power cuts and careers within Science, Technology, Engineering and Maths with schools and communities as the sports body aims to inspire the next generation of players.

Scottish Rugby will also work with its charitable partners to raise awareness of SP Energy Networks’ services for those with additional requirements; vulnerable customers who need extra help during power cuts, or those who need a little extra help in their day-to-day lives.

Frank Mitchell added: “We’re delighted that Scottish Rugby will ensure that the key work we do in the communities we serve will be amplified, be that the extra support we can give during a power cut, or access to specialised help services or safety messages.

“Similarly the players will be great ambassadors of our messages when they visit schools across the central belt of Scotland, served by SP Energy Networks.

“We look forward to working closely with Scottish Rugby over the next three years.”

Scottish Rugby’s Head of Women & Girls Rugby, Gemma Fay, said: “This is a hugely positive step which demonstrates the progress the team is making through Scottish Rugby’s investment. We are developing improved performance programmes, which are enabling our players to train and play more competitively than ever before, and which also allow us to develop a wider base of quality players capable of playing at the highest level.

“To attract a standalone sponsor not only brings in welcome revenue but also helps to develop the team’s identity and recognises the contribution the group is making within Scottish sport as the pinnacle of women’s rugby and something young players can aspire to.”

The new Scotland Women strips with the SP Energy Networks’ logo will be on sale soon.

The team will play their first tests in the new strip this November – including a match at their Scotstoun Stadium against Canada on 27 November 2018. Scotland U20 will wear the SPEN logo when they compete in the U20 Six Nations Championship. Scotland U18 fixtures will be confirmed in due course.