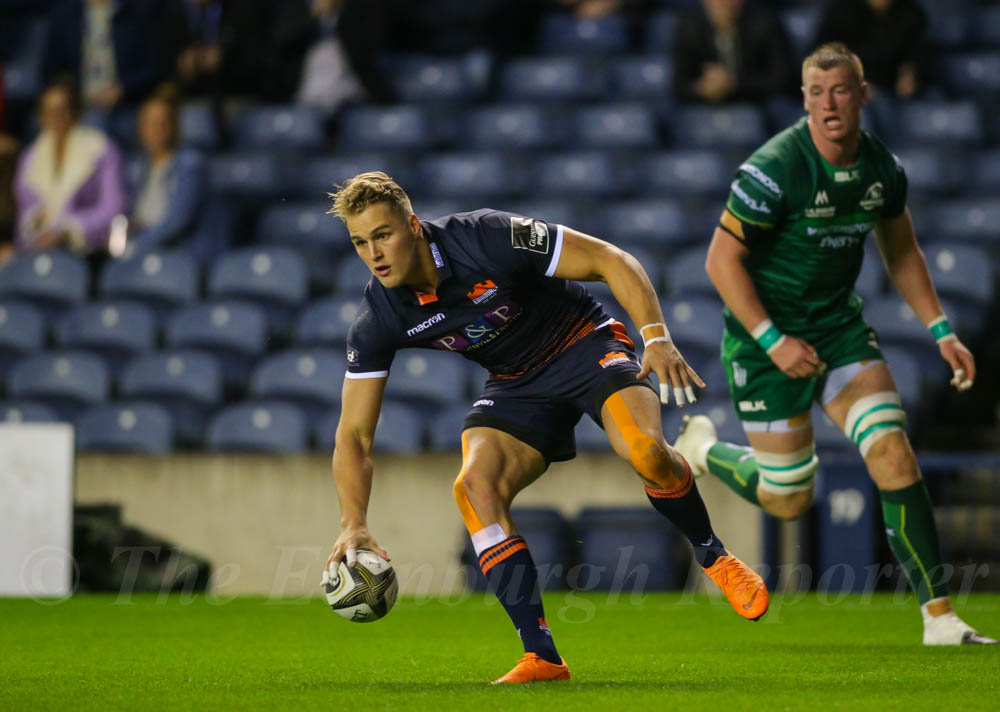 Edinburgh beat Connacht for first win of the season. Despite coming off the back of two away defeats in the 2018-19 Guinness PRO12, Edinburgh were starting to look good as Cockerill’s new shape squad were looking to make an impact.

Connacht were the opposition for the first Edinburgh home match of the season, and they had returned to BT Murrayfield after last year’s, not entirely successful, ‘experiment’ at Myreside.

The game started well for the home side, pushing the opposition back and keeping them pinned into their own 22 for large parts of the first 10 minutes.

The first Edinburgh chance came just after the 10 minute mark as the ball was slung wide to returnee, Matt Scott, who powered towards the corner, only to be driven out by Niyi Adoelokun.

Edinburgh continued to hammer away at the Connacht defence winning a couple of penalties on the way, but they went for touch to try and maintain the pressure.

Unfortunately, they couldn’t convert pressure into a score until the 25 minute mark. A break by Hamish Watson pulled play into the centre, but he was stopped short and the ball recycled. When play eventually stopped, the officials were called to check for a deliberate knock-down in ‘the red zone’. The TMO check confirmed the foul play and Connacht’s Jarrad Butler was binned for 10 minutes and Edinburgh went for the scrum.

Winning the ball, it was quickly passed down the blind side and wing, Duhan van der Merwe galloped over for his first try of the season.

His score was followed up by fellow South African, Jaco van der Walt scoring the conversion and it was 7-0 to the home side with 15 minutes felt to play. Connacht then enjoyed a brief period of attacking play in the Edinburgh 22, but they lost possession and play returned to the other end.

The half finished with another penalty to Edinburgh which van der Walt slotted home to take the half time score to 10-0 to the home side.

The second happy pretty much carried on from where the first had finished. Connacht were forced to defend a rampant Edinburgh series of attacks, but, again, the home side failed to capitalise on the pressure.

15 minutes into the half, the pressure nearly told as, following on from a series of rucks, the ball was, again, fired wide. This time, Blair Kinghorn’s pass just evaded the grasp of van der Merwe who was, otherwise, in at the corner. A penalty a few minutes later was kicked into the corner by van der Walt setting the home side up for a drive off the line out. Ball won, the drive took effect and Pierre Schoeman came up with the ball to celebrate his first try for Edinburgh. Van der Walt then converted for a healthy 17-0 lead with just around 25 minutes to play.

Connacht now started to turn the wick up and played a lot of their attacking deep in Edinburgh’s half.

They were finally rewarded with a try on 62 minutes from Adeolokun in the corner following up a series of rucks across the Edinburgh goal line. Jack Karty then converted for 17-7.

But, apart from a late penalty for Connacht for 17-10, Edinburgh absorbed further pressure from the visitors and ended the match with their first win of the season