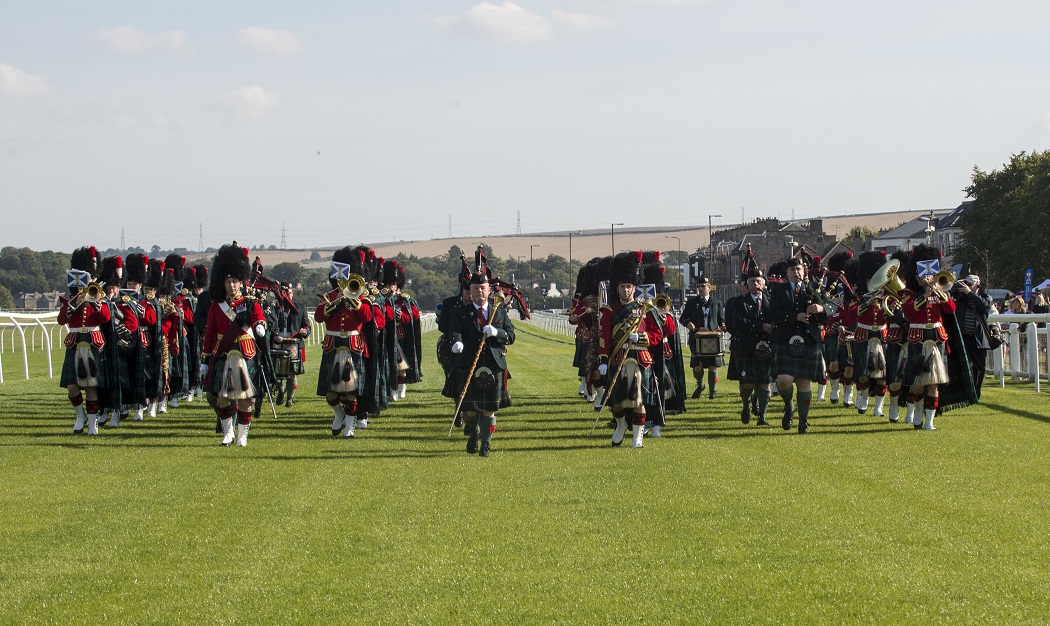 Musselburgh Racecourse marches toward the end of its summer flat season with its annual spectacular, the Supporting Your Services Family Raceday on Sunday. (30 Sept).

The penultimate Flat meeting of 2018 welcomes back The Royal Regiment of Scotland (SCOTS) and Massed Bands consisting of The SCOTS Lowland Band and 1 SCOTS Pipes and Drums.

With The Regimental Mascot, Shetland pony Cruachan IV, to the fore, the bands will start the raceday in style, parading on the racecourse’s finishing straight and will play throughout the day at other locations.

A range of interactive Army Forces displays will be positioned around the racetrack grounds, with support from 105 Regiment Royal Artillery and a climbing wall and assault course will be staffed by members of the Lothian & Borders Air Cadet Force.

An Army spokesperson said: “It is always a pleasure to be back at Musselburgh, carrying on a long military connection with the ‘Honest Toun’. The soldiers at Musselburgh Racecourse are represented by The Royal Regiment of Scotland and 105 Regiment Royal Artillery. In addition, cadets and Cadet Force adult volunteers from Lothian and Borders Army Cadet Force are running various activities.”

Representatives from the Scottish Fire and Rescue Service and tenders will be on site along with officers from Police Scotland.

Children aged under 17 and under are admitted free to the raceday when accompanied by an adult and can enjoy an array of free activities, including trampolines, fairground rides and face painting, a balloon artist and climbing wall.

Younger children will be thrilled to find Casper the Unicorn will be a special guest and there will be an opportunity to have photographs taken with the rare breed Eriskay pony.

Aisling Johnston, Musselburgh Racecourse marketing manager, said: “This is one of our biggest family racedays of the year and we hope everyone will come along to support our fantastic services who are ready to respond to our emergencies week in week out.

“There is entertainment and fun activities for families of all ages, all set against a wonderful backdrop of colour and traditional music supplied by The SCOTS and the Massed Bands who are hugely popular at Musselburgh. We know young children will really enjoy meeting Casper the Unicorn and we are delighted he is making his first appearance at Musselburgh.

“Combined with the thrill of live racing, our Support Your Services family day offers something for everyone and is a great way to finish the last weekend of summer on a high.”

The race programme features prize money of nearly £60,000 over seven races and the first race is off at 2.10pm with gates open at noon. Musselburgh will be running a free shuttle bus service from and to Wallyford and Newcraighall train stations.

For more information and to book tickets please visit www.musselburgh-racecourse.couk