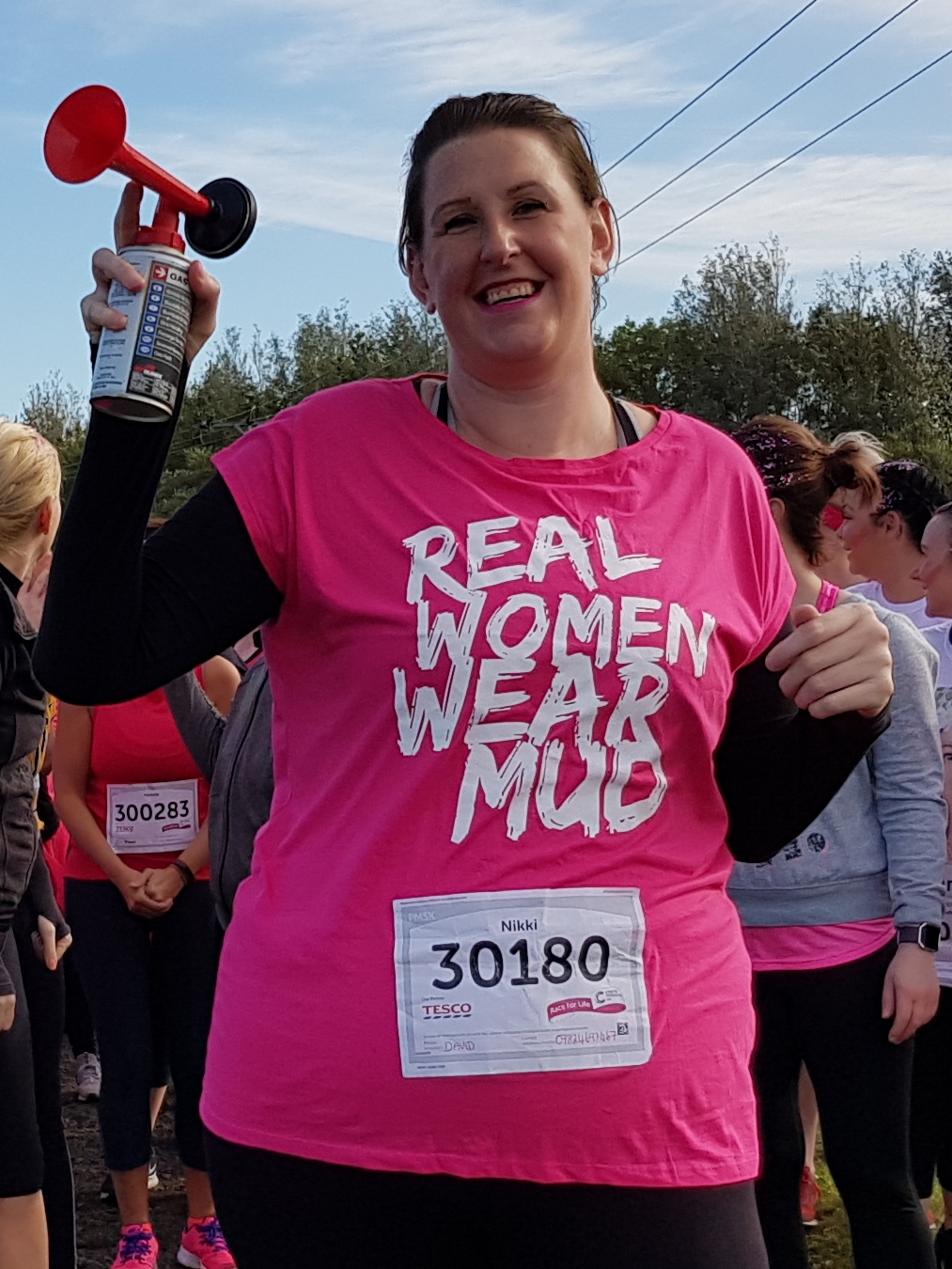 Nikki Martin sounded the horn at the Race for Life Pretty Muddy yesterday the signal for more than 3,700 women and children to begin the mud-splattered event at the Royal Highland Centre.

The event was a fundraiser for Cancer Research UK, and Nikki was chosen as she was diagnosed with breast cancer after life-saving open heart surgery.

Now cancer free, Nikki, of Easthouses, Midlothian also took part in the 5K course overcoming obstacles including an inflatable mud slide, space hoppers and a scramble net along with her friends.

Nikki, 35, said: “It’s been a brilliant day and I felt so honoured to be asked to start Race for Life Pretty Muddy Edinburgh.

“Research saves lives – it saves lives like mine. We need to keep fighting to find a cure for this awful disease. Surviving cancer has been life changing for me and my family. It made me focus on all the things I wanted to do with my life, like changing my career to work with children so I could make a difference in their lives. My goal is to one day become a primary school teacher and I’m determined to get there. Life is too short not to reach out for all your dreams.”

Earlier, school learning assistant Nikki and her husband David, 37, cheered on their sons, seven-year-old Finlay and six-year-old twins Masyn and Dylan as they joined around 300 youngsters to take part in Pretty Muddy Kids, a 4K obstacle course for boys and girls under the age of 12. Some adult participants also took part in a 10K obstacle course.

Nikki knows exactly why raising funds for research to give other families more tomorrows is vital. Nikki says she never takes good health for granted after coming through two serious illnesses in just two years. She was born with Marfan Syndrome, a genetic disorder of the soft connective tissue. It affected her aortic valve, with a build-up of pressure putting her at high risk of a potentially deadly aneurysm. In October 2013 Nikki had open-heart surgery – involving a 12-inch incision along the length of her chest- to clear a blockage. She spent nine weeks recovering but in June 2015 was diagnosed with breast cancer.

Nikki said: “I felt quite a large lump in my left breast one morning, just as I was putting on my bra.

“I think I knew right away what it was. I just felt something wasn’t right. Week later when I was sitting with the consultant and Edinburgh’s Western General hospital telling me I had cancer I was sort of expecting it. It’s strange but I felt relieved in a way- relieved that I knew what it was and that we could start doing something about it.”

Nikki underwent chemotherapy to shrink the 4.5cm tumour ahead of surgery. Side effects from treatment meant she lost her hair during eight months of treatment ahead of a lumpectomy in December 2015. Five weeks of radiotherapy in January and February 2016 followed Nikki’s surgery and she has been clear of cancer since then.

Cancer Research UK’s Race for Life, whose official energy sponsor is ScottishPower, is a series of 5k, 10k, Pretty Muddy and marathon events which raises millions of pounds every year to help fund life-saving research.

“Listening to Nikki’s story brought home to everyone why raising money for cancer research is so important. The atmosphere on the obstacle course was full of fun and camaraderie with an extra helping of mud, sweat and cheers. It was also emotional with participants wearing signs on their backs declaring their reasons for taking part. Many will be remembering loved ones lost to cancer or celebrating the lives of people dear to them who have survived.

“Our mud-splattered supporters gave it their all and the atmosphere is electric as women of all shapes and sizes unite to beat cancer.”