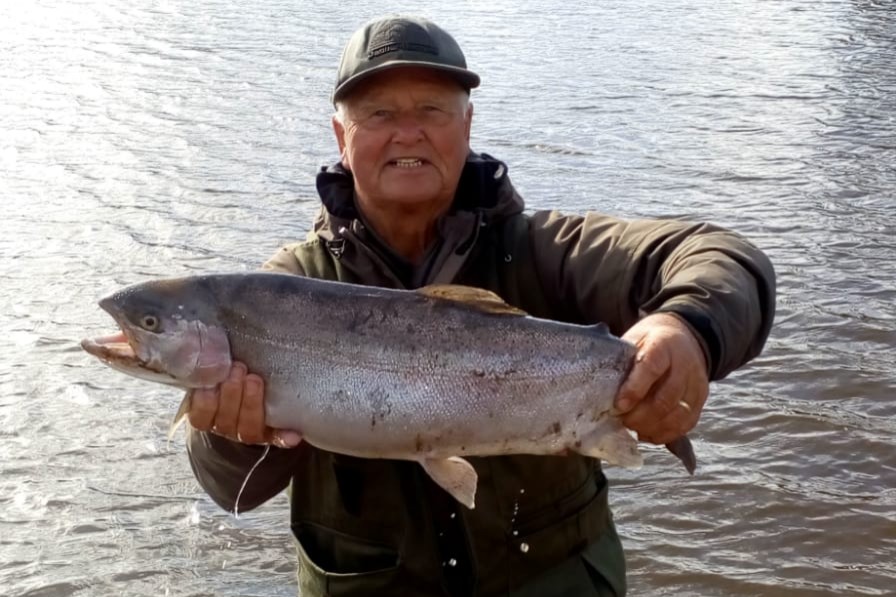 Day permits have been reduced to £20 from £25 because of the low water level at Harlaw and Threipmuir reservoirs and anglers are reminded to be careful on the steep banks.

Big fish are still being hooked. Ronnie Robinson took his 7lb 8oz fish on a Viva-based rabbit zonker in black and green with a gold bead and John Balfour also landed a heavyweight to a buzzer.

Fish are also being caught on all beats on Cramond Angling Association’s eight-mile stretch of The Almond including brown trout over the 2lb mark.

Nymphs, wet flies and mepps are proving the most successful. Chairman Adam Cross said vegetation is dying back on the upper beats which will make access to the river easier and that is where the bigger brown trout tend to linger.

Markle in East Lothian, the best recent fish caught weighed 12lb and was hooked by local man Ron Thom on a black spider. Bruce Hunter from Edinburgh landed one at 9lb 8oz on his home-made black lure.

Owner Jonathan Swift said Jack Hay, also from Haddington, landed a 7lb rainbow on a pheasant tail nymph and Mr Gillies had two at 5lb and 6lb 8oz respectively on a green and white snake.

Keir Baikie from Aberlady, used a yellow dancer to land a cracker of 8lb 8oz and Brian Conway used a damsel pattern to take a 6lb 8oz fish.

Mr Ferguson from Edinburgh was also into prize specimens with three fish for 14lb 10oz, the best at 8lb 10z on a dancer and Gary Scales, also from the Capital, had one at 7lb 8oz on a black lure.

Finally, Mr McMillan from Honeywell Fishing Club, had a good bag of three fish for 14lb 8oz on white lures fished to fry feeding trout along the edge of the Monastery Loch.

Jonathan said the bigger fish are starting to show now that the water temperatures have dropped and prospects are improving for the Autumn.

Glencorse Reservoir above Flotterstone in The Pentland Hills will be trialling midweek evening sessions from May next year.

Owner Bill Taylor confirmed they will be on Tuesday, Wednesday and Thursday from 5.15pm to 10pm for three boats or more.

He said: “They will be by bookings only and single boats are welcome to book, but we will require at least another two boats to book before we will open.”

Day sessions next season will be from Tuesday to Sunday (9am to 4.30pm) for three boats or more. Once again it is bookings only.

Bruce Hope, chairman of West Lothian Angling Association, said that the rise in the river level was welcomed and he confirmed that the club’s next fly tying evening for members and non-members is at Mid Calder Community Centre (opposite the Black Bull) on Monday, September 1 from 7.15pm to 9pm. Materials are provided along with instruction.