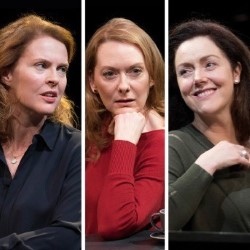 Three women.  Three conversations. Listen carefully.  A psychological puzzle and a quietly devastating tragedy, The Approach explores the inner lives of Anna, Cora and Denise as they desperately try to make sense of their world.  What will their conversations reveal?  And what does each of them have to hide?  Mark O’Rowe (Howie the Rookie, Terminus) is one of Ireland’s leading playwrights.  ‘Three of the finest performers of their generation’ (Irish Times) – Cathy Belton, Derbhle Crotty, Aisling O’Sullivan – star in O’Rowe’s ‘quite simply stunning new play’ (Sunday Independent).

The Approach features four coffee chats with three middle-aged Irish women, sisters Anna and Denise, plus their old friend Cora.  The conversations take place just between two women at a time and go full circle.  They start with Anna and Cora, then Cora meets with Denise before the sisters catch-up and then we go back to the original pairing.  None of them have spoken for a while, with much water having passed under their individual bridges.  While there is an obvious affection between each set there is also a distance, as often happens when we fail to manage and make time for our friendships.

All of life is here, with the conversations flowing in a natural fashion and mostly the dialogue isn’t out of place.  The playwright Mark O’Rowe covers various subjects but none of them feel shoe-horned in.  This is not issue-writing by the numbers with life events put in to get a tick in a box.  These women are talking about their lives and none of the experiences jar; what they describe sounds natural and is delivered in a sincere fashion.  While they have drifted apart from each other each one of them trusts the other and is willing to confide in them.

All of the performances are perfect and it is no surprise the praise given to the trio of actors – Cathy Belton (Cora), Derbhle Crotty (Denise) and Aisling O’Sullivan (Anna).  While the Approach is a really good play it could be an outstanding one but three things stop it and all of them are avoidable.  The last scene is the main problem, it seems lazy and doesn’t work at all.  Having built up the natural conversations, this one doesn’t sit well and I can’t believe the two characters would interact like this.  Unless you are creating an alibi you don’t talk like this.  There’s also an image all three women use in turn as the circular chats take place.  The problem is when it comes back to the original character she doesn’t react to it at all, let alone amazed that somebody else has experienced exactly what she had did earlier in her life.  There is no way she would have reacted that way; at the very least you would say, “That’s amazing, the same thing happened to me!”  I know these seem small but they really mar what is otherwise an extremely accomplished and well written play.  I can’t understand why Mark O’Rowe would have left them in.