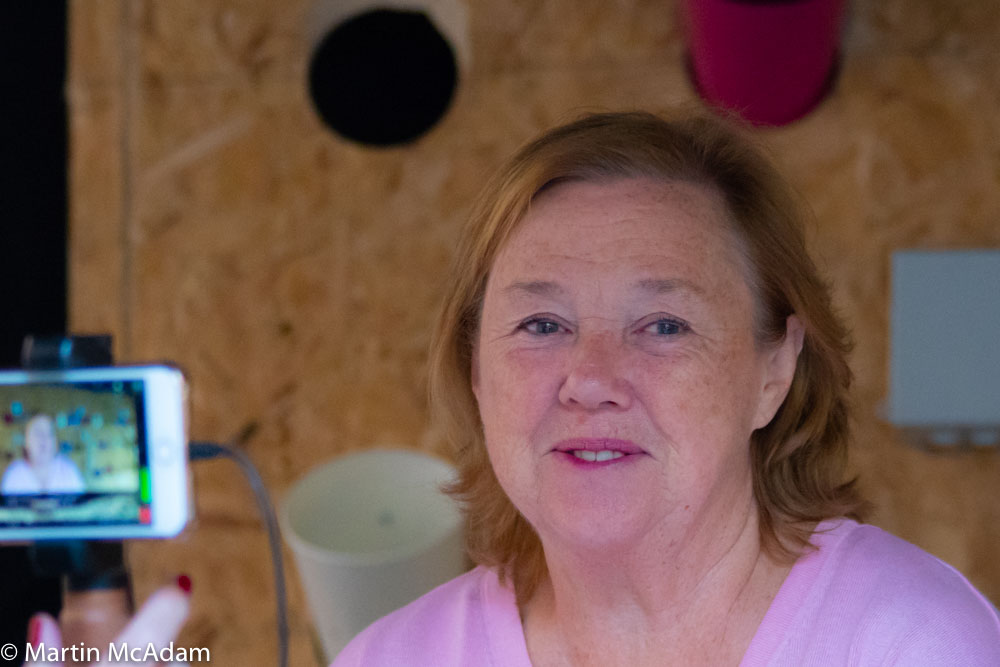 There is a very wide selection of shows at the Patrick Geddes Centre at Riddle’s Court on the Royal Mile, and one of those features young people from Edinburgh who are studying acting.

BLACK OUT is inspired by the true tale of a young offender from Glasgow who had committed a violent crime. This is a play about bullying, fighting back and after losing your way, finding it again.

PQA Venues has taken over the entire historic venue and is using it to showcase the work of their students as well as staging professional productions. It is entirely appropriate that the young people are able to use the Patrick Geddes Centre. Geddes was among many other things an educator, who believed that education is a catalyst of social change and active citizenship.

The star of Birds of a Feather, Pauline Quirke, explained to us that she set up the Pauline Quirke Academy about ten years ago so that her son Charlie could follow in her acting footsteps, but there is also a much bigger idea behind the venture.

Speaking with @PaulineQuirkeTV who is looking for dorm accommodation in Edinburgh for her students for next year’s @edfringe pic.twitter.com/TxQqU1pku3

Now there are 170 academies across the UK, including Edinburgh and Glasgow, teaching young people professional skills along with some confidence building and other life skills. Young people from eleven of those academies will appear on stage here and will find themselves being catered for (literally in the kitchen!) by Pauline herself. She claims to make a mean breakfast roll of a morning!

Pauline said that she is not appearing on stage, but is delighted with all of the productions which are being staged here.

One of these is Early Birds which is written by Maurice Gran and Laurence Marks who penned Birds of a Feather. It depicts the true story of how the sitcom came about around 30 years ago. This is a necessary commercialisation of the legacy from the show where she made her name.

Steve, Pauline’s husband explained that the financing of a Fringe run needed that element. He said : “We chose five productions to launch the venue. Upstairs we have the academies using the venue free of charge and bringing all their parents and so on. But to establish a new venue we needed commercial projects. And to make it pay for itself so that we can let the academies come free of charge there has to be commercial viability. So the five shows including something written by Gran and Marks in Early Birds, is quite unique. Our Boys by Jonathan Lewis has been round the block a couple of times. It is a fantastic piece. The two musicals are great and then we have our kids Poppets show.”

But Pauline explained that the search is already on for accommodation for next year. She said : “The problem we have is that we need somewhere for the students to stay while they are here and the festival is going on.So we are going to work on that so that children from all over the country get the opportunity to come here. We need a dorm as it is hard for the academies or the young people to pay for accommodation here. We have found the venue but we need to bring more students next year to perform upstairs with professionals downstairs.

“This venue at Riddle’s Court is unbelievable. I was here last year to see Charlie in a play and Steve managed somehow to secure this for us. They have just spent millions on this venue and yet unbelievably they said yes we could come here.”

While she is in Edinburgh Pauline and husband Steve are staying in the King’s Chamber, a flat within the historic building that is let out for anything from a one night stay. But Pauline has a rather different take on the name of the apartment. She said : “I like to think of it that the king stayed in our chamber. It is lovely I have a little kitchen and a telly – though I have not had the time to watch it yet!”

Although Pauline has not been at the Fringe before her visit last year. Now she is the best ambassador for the city and the arts festival, telling everyone she meets that they must come to Edinburgh.

The Edinburgh Reporter was entertained to snippets of some of the productions in a showcase at the weekend, and we will definitely be back to see at least a couple of them in full!

RIDDLE’S COURT ON THE FRINGE

EARLY BIRDS – Acclaimed comedy writers Maurice Gran and Laurence Marks will premiere their new play, telling the incredible yet true story of how they conceived and wrote one of the nation’s favourite sit-coms, Birds of a Feather. Early Birds starts with a chance encounter in a West End hotel, and ends with a show considered so saucy it was nearly cancelled two weeks into its run, yet which is about to enter its thirtieth year as a TV comedy classic. Directed by Alexandra Sumner-Hughes.

OUR BOYS –  Jonathan Lewis directs an updated version of his critically acclaimed play (seen in the West End in 2012) in a new production premiering at the Fringe. For this production Jonathan has updated the action from 1984 to 2010, in the aftermath of ‘Herrick IX’ Afghanistan. The story follows six soldiers on a hospital ward, and it is as heartbreaking as it is hilarious.

JOB-CHER Sandra and Donna’s Cher act is in trouble. Forced to work together during the recession, 10 years on things are not any better and the gigs are drying up. Clubland has lost its sparkle and so have their outfits. Join them backstage as Donna desperately tries to convince stubborn Sandra that her idea can save their act.

THE LAST 5 YEARS – Recent Edinburgh MGA Academy graduates Caitlin Tipping and Connor Burnett perform in a new production of Jason Robert Brown’s intimate musical about two New Yorkers who fall in and out of love over the course of five years. Cathy tells her story backwards while Jamie tells his one chronologically. The two characters meet once only. Directed by Gerard Bentall, with Musical Direction by Sam Coates. CLOSER THAN EVER – Discover the span of universal highs and lows faced by us all through the experiences that life throws at us – love, heartache, fear, growing up and growing old – in a brand new production of Maltby and Shire’s musical revue, directed by Alexandra Sumner-Hughes, with Musical Direction by Sam Coates.

MAD WOMEN IN MY ATTIC Powerhouse madwoman Monica Salvi brings back her cabaret tour-de-force with finely tuned musical gems administered with the aid of her psychotherapist. Enjoy the winner of Best Cabaret Award at NY’s United Solo Festival