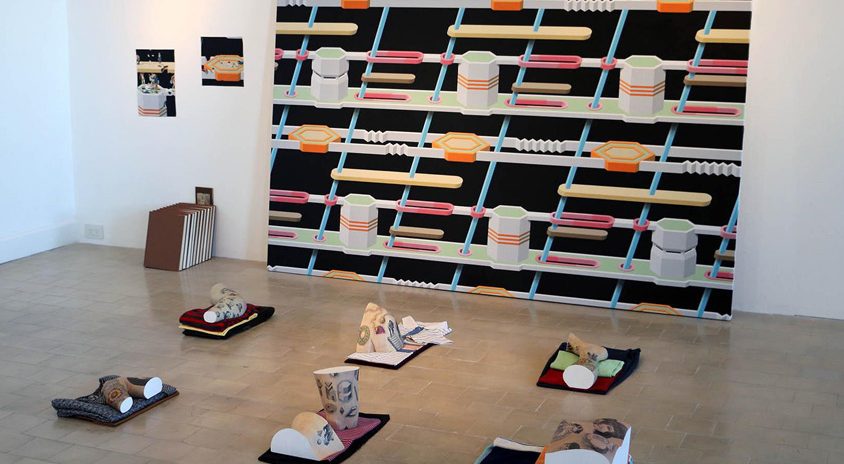 Explore the lesser-known lands, hidden away in Edinburgh, where independent art can flourish.  It’s easy to be overshadowed in a city full of theatre and music, especially if your venue is less than traditional.  Instead of white spaces and formal walls, this art is being shown in churches, caravans, and museums, and it’s all worth the excursion outside of Fringe central to take a chance to savour the peace and see something new.

Tucked away behind the train tracks is Cranston Caravan Club, a collection of vehicles displaying original plays and art.  Before even entering the park, visitors are reminded art can be free and should be free to all.  It’s an important idea, one which nearly contradicted itself when I was asked to leave a £5 deposit before entering their most interesting installation.  Luckily, I was quickly refunded after leaving the installation, The Department of Lost and Found, which is being shown until August 27.

Inside a wonderfully vintage caravan, is a collection of misplaced and found objects like lost photo albums and unwound tapes, complete with vintage flasks of juice or a kettle to make tea for a sit down with biscuits.  It’s a not a ground-breaking project, but it is simply warming in its approach to precious nostalgia.

Inside St Mary’s Cathedral, just off Haymarket, is Mergings from Dave Sands and Liz French. Inside the dramatic building’s arches and ancient stones stands Sands’ enigmatic photos, which play with the light and colour found within the cathedrals’ stained glass windows designed by Eduardo Paolozzi.

The curation is unassuming and somewhat lacking, but the subtilties within the images themselves can still be seen and enjoyed.  Unlike the display of Caroline McNairn colourful paintings in one of the small chapels, which while modest, seem to melt into the cathedral setting in a soft harmony.

Alongside Sand’s work is Liz French’s glass sculptural response to living alongside someone with a prostate cancer.  The small, poignant piece is made from multiple upright layers of crafted glass.  Placed upon a podium the piece becomes a shadow box in the cathedral’s light. The show has gentle spirits which could only grow stronger and more apparent with some further developed curation.

More mystical work comes from the Edinburgh based collective Esbat, who are showing Dream Recall in The Life Room Gallery, until 26 August.  The collective has a diverse set of artists with work including painting, drawing, photography, and sculpture.  The group weave magical intentions into their work and invite you to enter their imagination, the work only touching on reality delicately and when needed.  More thoughtful work comes from

Anatomy of Fleeting Moments: Hans K Clausen & Kjersti Sletteland, until 25 August, in the Anatomical Museum. Clausen and Sletteland, both based at Edinburgh Sculpture Workshop, have worked with the NHS to create and collect porcelain hand ‘squeezes’ from patients and staff.  A chance to see a unique record of fleeting gesture, and the connection to the hospital community who shaped them.  An appropriate exhibition for a Fringe where the politics of our nation’s public services have been brought to the attention.

ESW itself, a workshop with concrete tower and minimalist façade with a hidden café, is also holding Hemispheric Phases, until 25 August, with Birthe Jorgensen, Santiago Poggio & Scott Rodgers.  After ringing a buzzer to enter, visitors can view sculpture and installation using photography and nuanced references.  The work is a culmination of a six-month cultural exchange between Argentina and Scotland.  The traditional carving and digital painting prints are interesting, but the eye is drawn to the sculptures made from collected objects on the floor.  Rodger’s sculptures use materials like poison traps and crash helmets seemingly stressing the exhibitions insights into humanity’s control vs nature.

Nearby is Meanwhile in DOK artists space, a disused warehouse by Leith docks, until 26 August, the exhibition will present paintings from Yolanda Mckean, Michael Coombes, and Emma Drye, which reveals the intimacy and emotional tension in urban and domestic spaces, as well as the unassuming scenes which can take place within them.

At the Maritime Lane Collection, people can question the state of truth in the fiction in Mythopoeia: Adam Linklater, until 28 August.  Artefacts of a possible cultist artist have been found, but was he ever actually real? The exhibition clutters the room at Maritime Lane, an artist-run studio building, which can be entered through a courtyard decorated with street art.  The mass of objects includes posters, found books, and films depicting the mystery preacher, but I was caught a guard by the eerie preacher’s costume; a flower and feather decorated figure with a plastic headdress resembling a pharaoh and placed behind an enclosed counter like a DJ.   The energetic and unfiltered exhibition works well in the dark gallery and follows in the tradition of counterculture fiction.

These smaller exhibitions vary, but they really do represent the artistic freedom alternative venues can introduce. A seen on the Fringe, and in the Edinburgh Art Festival, but often lacking in Edinburgh’s art scene, stranger art spaces and creators can become the showstoppers.  Not only can they represent a moment of peace and recollection in an overrun city but they can also remind us why it’s so important to support the independent makers.